We were supposed to be in Ecuador. Instead, we were walking, again, along the ragged edge of the San Francisco Bay watching airplanes take off and land. They were simultaneously carrying people off to their Christmases and bringing them home to San Francisco.

This wasn’t our usual haunt—freeways droned and hotel towers loomed. There wasn’t a Bluebottle coffee in sight. As we whittled away the days, though, we found bright spots: a cozy 1930’s doughnut shop, a diner whose Greek owner was a new grandfather and sweetly smitten with our own 3-month-old son. The sunsets, the janitor-turned-fisherman with his cooler of beer—little things that helped take the focus off the plane we were supposed to be on. 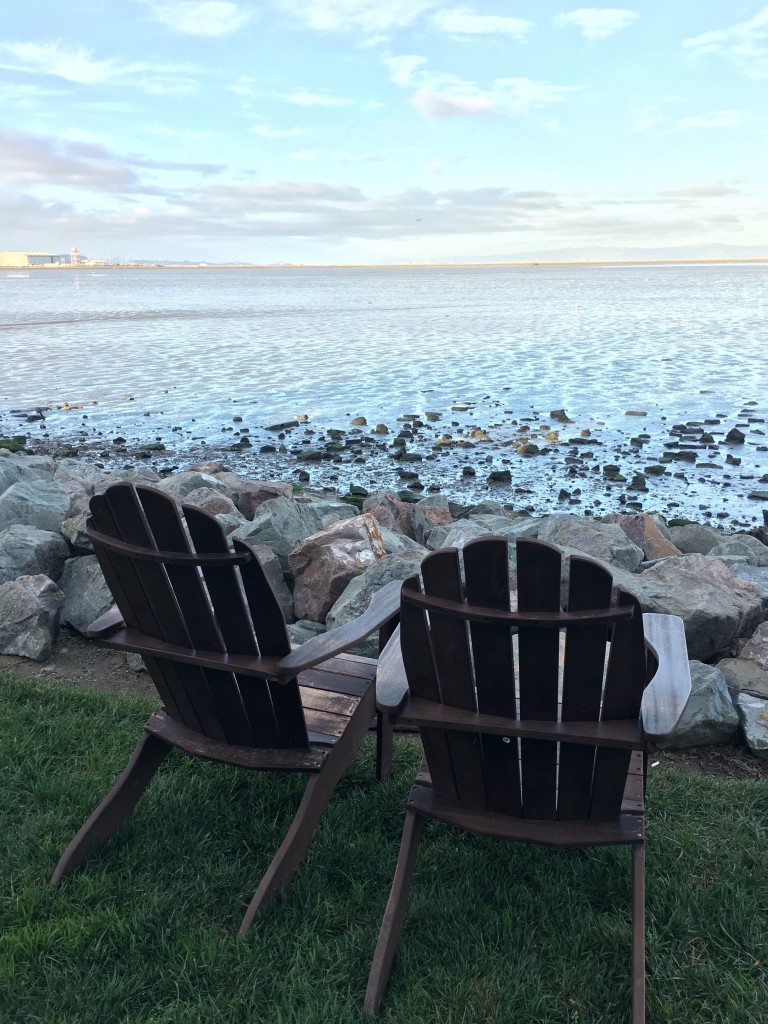 Just days before I had met James at that very same airport. His embrace was warmly familiar, as was the California air that no matter how late at night, always carries the whiff of sunshine. The next morning, instead of fancy coffees and visits to friends in wine country, I woke up sick. As if parenting isn’t hard enough, illness can really take it over the edge. You’re weak when you must be strong: to lift, wake, interpret and respond to a variety of needs.

I recovered in a small drafty loft above the bronze foundry where James works, waking to the early morning chorus of grinding metal and machines I don’t know the name of, only to fall asleep again in a vice of nausea and fatigue. James brought soup from Berkely Bowl, worked, and cared for Felix. Without him, I would’ve been lost in a stupor of self-pity and pseudoephedrine. 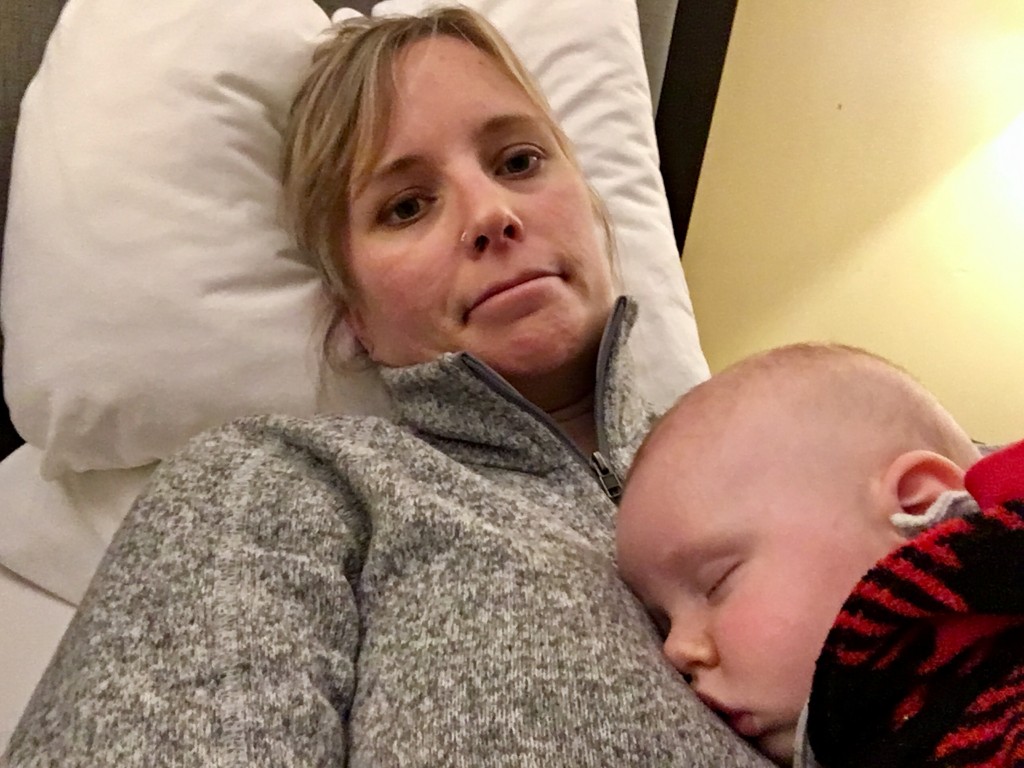 Finally, it lifted. A good thing, too, as we were due to leave for South America the following day. But now there was a new problem: Felix’s dry cough and runny nose seemed to be turning into more than just a case of airplane sniffles. Neither of us is a doctor, but we knew our son wasn’t well. We called doctor friends back in Canada. We bought a thermometer; it confirmed a fever. We asked ourselves whether it was wise to travel. Onward.

We bundled Felix in his checkered fleece moose suit and Uber-ed to a hotel closer to the airport. Our driver had been a child soldier in Ethiopia. He slept in his Camry while working in the city all week, and drove back to Sacramento every Monday to be with his family for two days. “This is my Hilton,” he said, gesturing as if a butler presenting a grand lobby. Suddenly, our own situation felt small.

We woke at 2 am to raspy, barking coughs and the desperate crying that only comes from pain. I stayed awake the rest of the night with Felix’s small body tucked next to me, watching over him, feeding him, protecting him. A week later, in the Galapagos, we’d see Blue-Footed Boobies sitting on their young. I’ve never felt so animal. At 5, we canceled our flights and took another Uber to the UCSF Children’s Hospital. 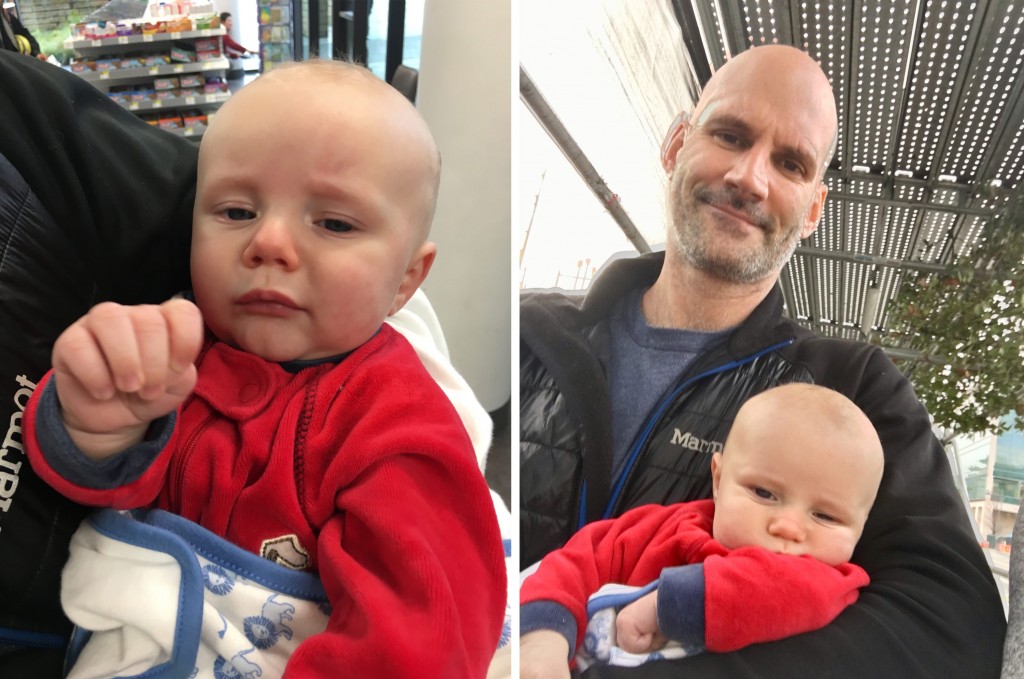 Felix after his hospital visit.

After steroids for croup were administered, we headed back to Burlingame—grateful but stopped in our tracks. We tended our wounds with a walk to Trader Joe’s for soup. Felix seemed to improve by the hour, but we knew we were in for a few more days of recovery. And so we passed the time—watching groggy hotel guests pour waffle batter into one of those waffle makers you only find at cheap hotels; watching the sun light the alley out our window; watching Love Actually on TV; watching the planes take off and land, take off and land. 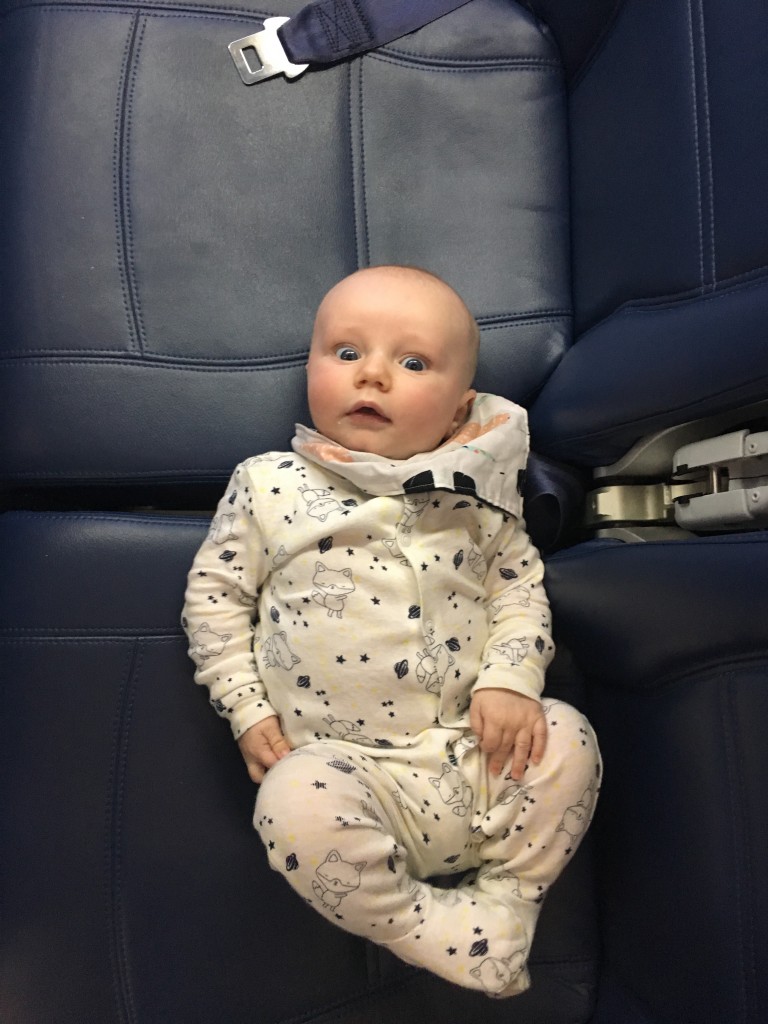 Finally on our way.

Watching your baby mellow as he chirps in breath is sobering. It left a mark, seeing him so helpless, and feeling helpless myself in a country where basic care comes at a hefty price (the bill is sitting on my desk, waiting to be submitted to my insurer). Months later, when driving back into Canada, I felt a sense of relief and peace I’ve never felt crossing that border before. “Let’s just take him to emergency for fun,” James said to me. We laughed.

After two months of making our home in a thousand places, it was good to be home.

One thought on “Burlingame”