En route to Argentina, I started jotting down thoughts inspired by turning another year older, and making it to another start line. I kept going until I got to eight. Eight thoughts for numero ocho.

“You are a year in the making,” my coach wrote to me the other day. It sounded so dramatic at first, but then I realized how right she was. Sunday’s Ironman Mar Del Plata is the race that wasn’t plotted but emerged slowly, like a painting.

I did an Ironman two months ago that was light and celebratory of being injury-free. I’d like to feel the same about this one, but I don’t. I care a lot more. And that feels good. It is a year in the making: A year of Vancouver city pools, undulating bike rides to Whistler, and pool running. A year of false starts and showing up at start lines just because. A year of letting go. And that’s something to celebrate, too.

And suddenly there I was, wandering the streets of Buenos Aires alone, at 11 pm, on my 37th birthday. If I’d seen a glimpse of myself at 25, it would have thought it was some other woman’s life. 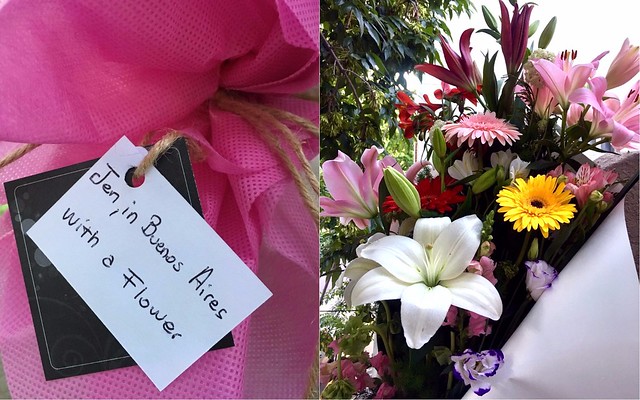 Beautiful flowers waiting for me in BA, with a reference to “Clue.” 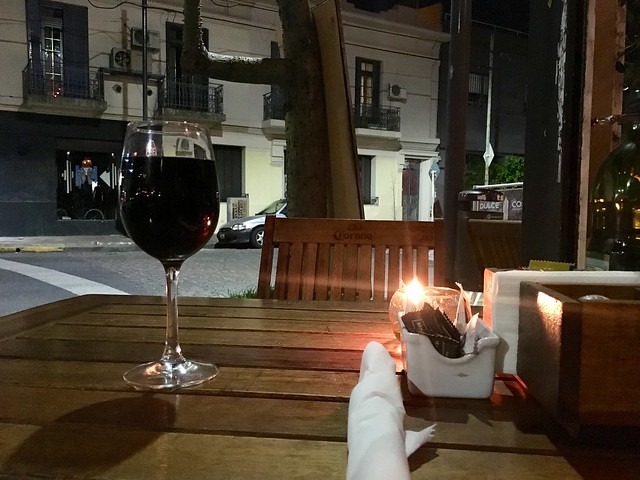 Birthday malbec for one at a sidewalk bar in Palermo SoHo. 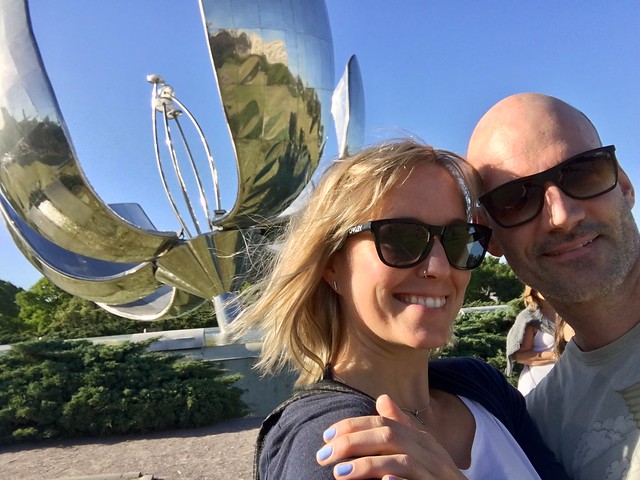 Exploring the city together.

A woman at my church in Winnipeg once said to me, “If you want to make God laugh, tell her your plans.” It still cracks me up to this day, for a few reasons. I don’t believe in the kind of God who thinks about what race I do, but still, the quote holds broader wisdom about remaining open to fiascos, snafus, and re-routings. Because if we’re not, we’re probably going to wind up disappointed.

I’ve worked through this notion in love, marriage, family, career, and of course, triathlon. Sure, lots of athletes execute perfectly-planned races. But more often than not, we land on the spectrum of surprise: delight, devastation, disappointment—aka, not what we planned.

Back alley art in Pallermo SoHo. 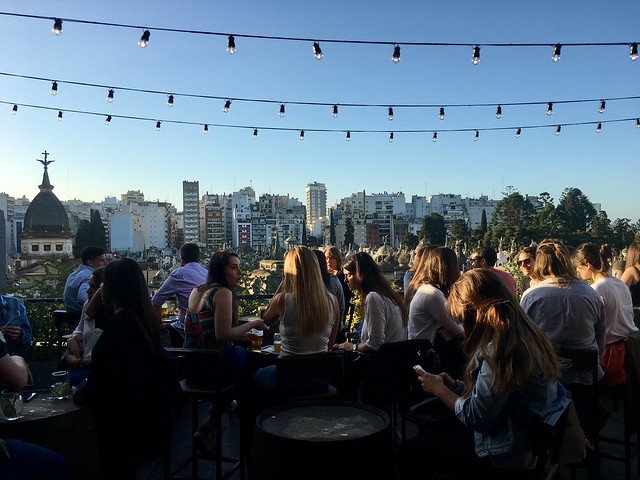 Beer at a rooftop garden overlooking Recoleta Cemetery (you can see the monuments beyond the people’s heads).

I’m currently reading Viktor Frankl’s book, Man’s Search for Meaning.  In it, he writes: “Don’t aim at success—the more you aim at it and make it a target, the more you are going to miss it. For success, like happiness, cannot be pursued; it must ensue […] happiness must happen, and the same holds for success; you have to let it happen by not caring about it.” I’ve been thinking about that a lot in various facets of my life. I’m torn, because I’ve also heard that meditating on our goals can help us bring them to fruition—kind of a “dress for the job you want” or “fake it ’till you make it” mentality.

There are some beautiful city parks in BA. 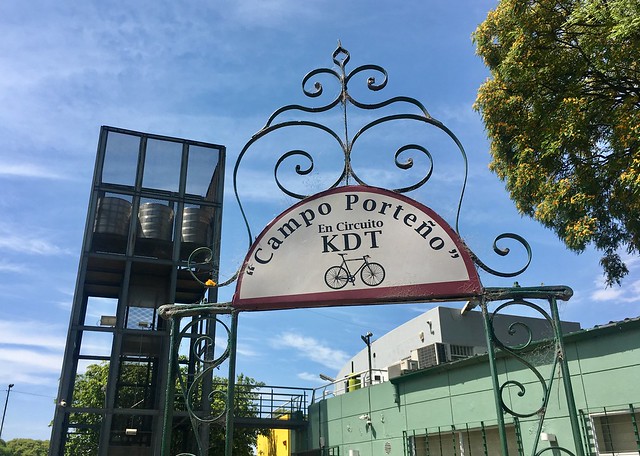 A 1km cycling track in the heart of Buenos Aires where all the serious cyclists go to train. Around and around we go!

This picture makes it look empty, but there were actually quite a few people on the circuit.

Even after 7 of them, Ironman races still feel “big” to me—worth traveling to faraway places for. I love the distance for the way it brings opposites together: haste and patience; fanaticism and flexibility; exhilaration and flow; solitude and camaraderie. Waking up at that ungodly hour; the small rituals of food and gear; so many individual but related journeys landing in one place, together. 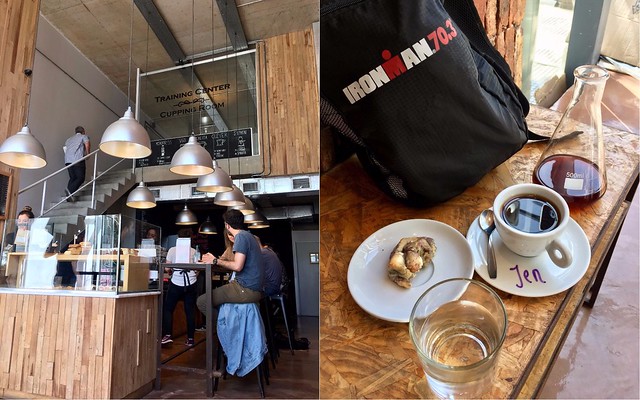 LAB coffee around the corner from our Air B&B. Perfect. 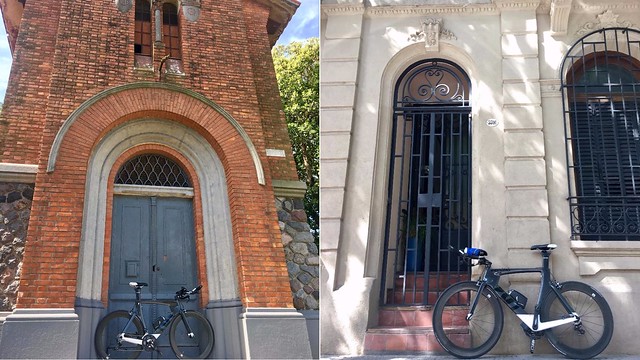 Bike photoshoot with BA architecture as the backdrop. A city electrical station, and the front door of our Air B&B.

Before I left for Argentina, someone asked when I was going to stop doing Ironmans. I’ve been asked this before, and I understand, given the time commitment.It seems as though Ironman epitomizes a hobby gone rogue, if you will, that makes people think it’s a phase. Like wearing black or dying your hair purple, unlike asking someone when they’re going to “stop” skiing or windsurfing or reading or doing yoga. I tried to answer thoughtfully.

My answer contained musings about feeling like I’m ready for a break—from the distance, not the sport. I’m not going to declare my “retirement” right this second (I’ve tried, to no avail!) but there are things scratching at me, like a cat at the door in the morning. Things wanting to be done. Hobbies I miss. Part of me that needs to face the fear of stopping, and to face the version of me without this level of training. 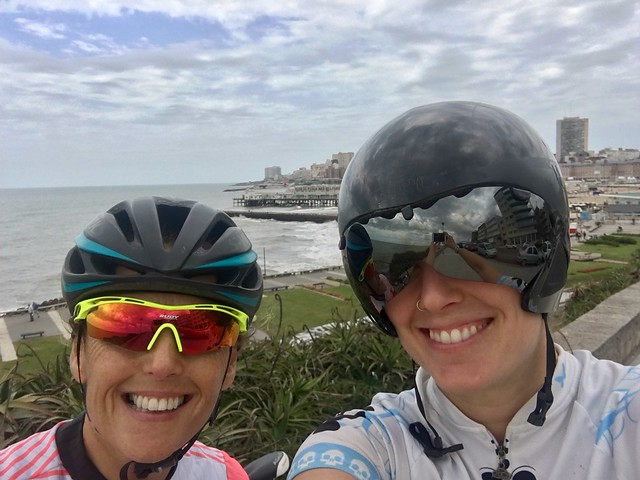 Pre-race spin on the course with Ms. Blanco. 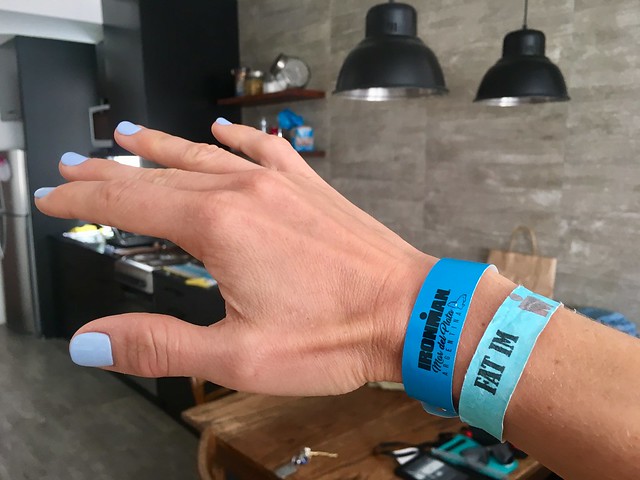 Federacion Argentina Triathlon, or another message?

We finally arrived in Mar del Plata, and, continuing with the theme of this post, it’s nothing like we expected. The sea is playful (or angry, depending on your attitude), and I am grateful I have six years of Pacific Ocean swimming in my bones. The weather is chilly, and I’m I packed clothes for Toronto and Winnipeg, which happen to be included on this little “world tour.” The city is strange: crumbling seaside mansions decorated in graffiti whisper of a former glory, while towering apartment buildings sit empty, waiting for their summer occupants. New places have a way of calling up places we’ve been before, and this is no exception.

Throw in 1500 Ironman athletes and the package has my traveling companions and I quite fascinated as we search in vain for a parilla restaurant that’s open at 6:00 pm. (Most restaurants don’t open until 8, but last night, our little American/British/Ecuadorian/Canadian crew managed to find a great spot. I’m falling more and more in love with Argentinian bife every day, as I expected I would.) 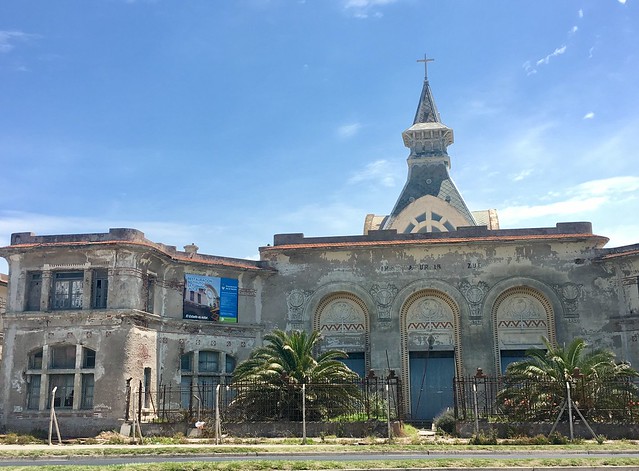 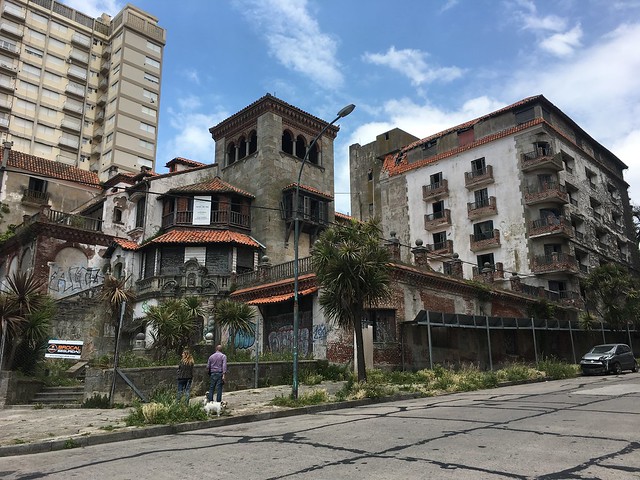 An old mansion right around the corner from our Air B&B.

When you’ve done a few of these races, they start to feel like touchpoints or markers, like Christmas. “That was the year I did South Africa,” becomes as common a memory as the year Grandpa gave us a box of 200 individually-wrapped up loonies or the first time you didn’t come home for Christmas and listened to George Winston in the C-deck of a ship off the coast of West Africa. That time I…that year we…and the list goes on. Races like this are interesting markers that way.

Last week I was telling a friend that I wasn’t as lean, as fast, as etcetera as I used to be (not great pre-race thoughts, I know) and she reminded me that I am not the same person. I am going into the race tomorrow with who I am now, in that moment. It’s a good thing I’m surrounded by so many wise people. 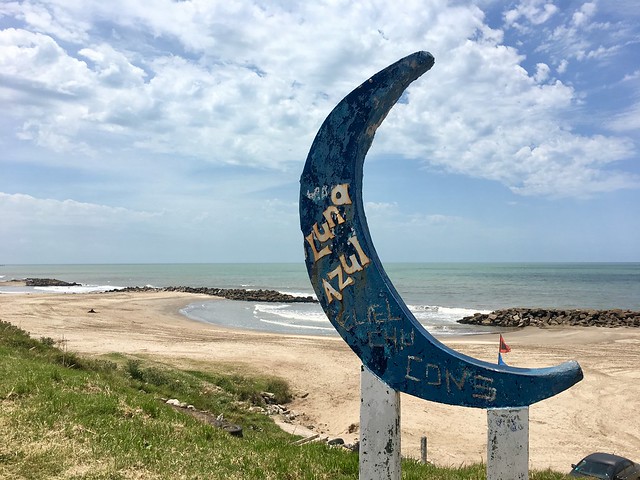 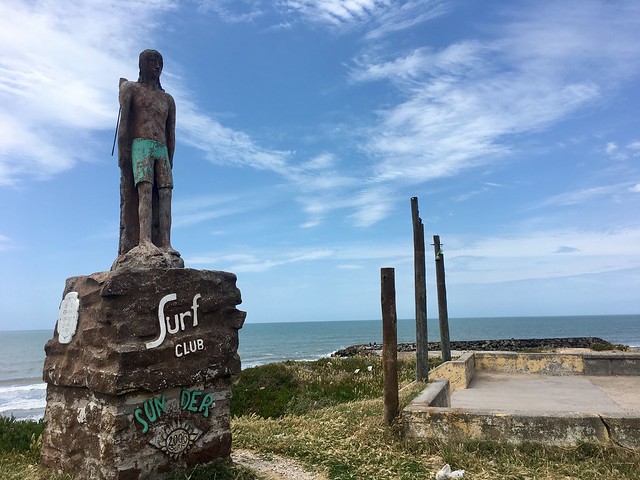 What will Ironman number eight hold for me? I have done my best to plan and prepare, all that’s left is remaining open to possibility. I’m happy to be here, healthy, and supported, come what may.

Here’s to calm(er) waters, a tailwind on the bike (because if there’s gonna be wind…), and a positive + proactive mindset all day. 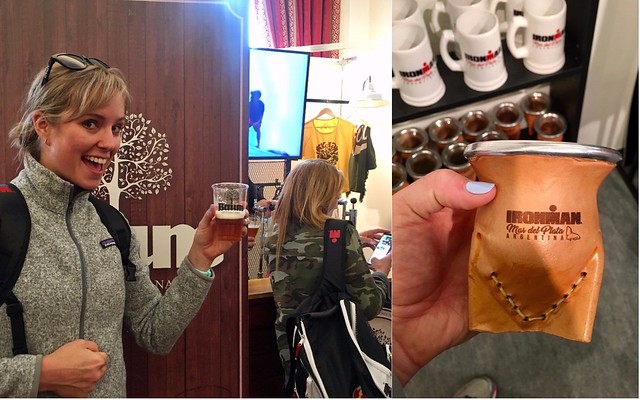 “A special beer for athletes,” and the best IM souvenier I’ve ever seen: a mate cup! 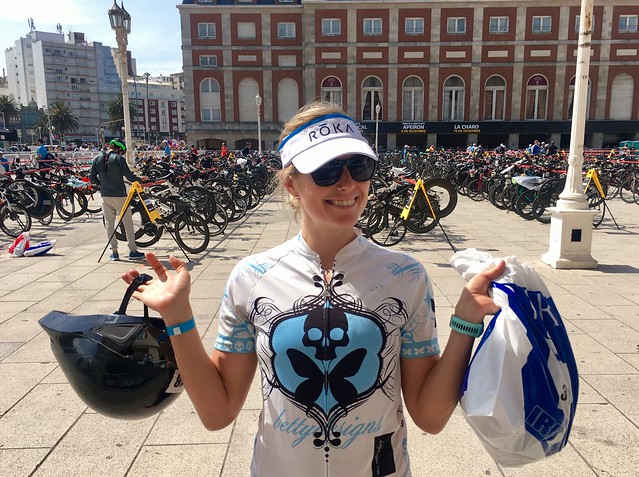