A week ago, I did a triathlon. A real, live triathlon! With a swim, a bike, AND a run. My first triathlon of 2017. It just took me awhile to get started.

When I jumped (leapt!) back into running at the end of August, I was surprised how much I’d missed it. I let it come: the terrible runs, the strong runs, and the runs that felt fast but were still slow. And I didn’t even mark my runs private on Strava. 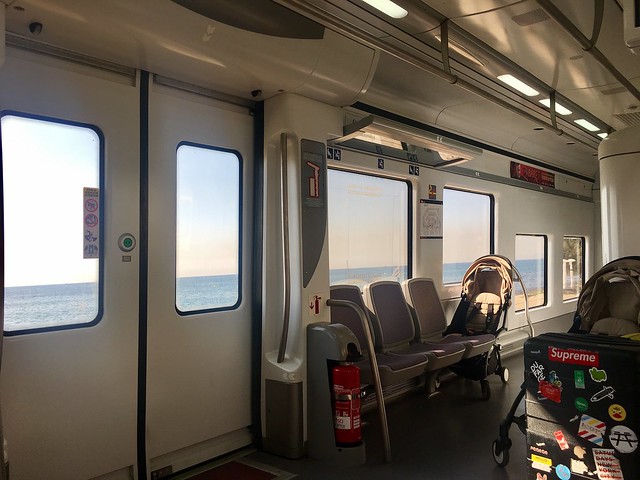 Taking the train to Calella on Friday.

I wrote the eve of the race about my unconventional pre-race prep and the liberation of dreaming small. Today, in true race report fashion, I want to write about the day. Because, to me, a day spent doing an Ironman is special. There are other special ways to spend a day, sure, but this just so happens to be one of my favorites.

The age-groupers swim start wasn’t until 8:20 due to the sunrise, which meant I could sleep in until 5:30—gloriously late for an Ironman! I ate eggs and toast and croissants and jam in the hotel buffet, letting my intuition guide me, not calorie counts or some complicated plan. I pulled on a new one-piece Roka aero tri suit that I’d never tried in training, packed my bottles and swim stuff into a backpack, and joined the dark procession to transition. 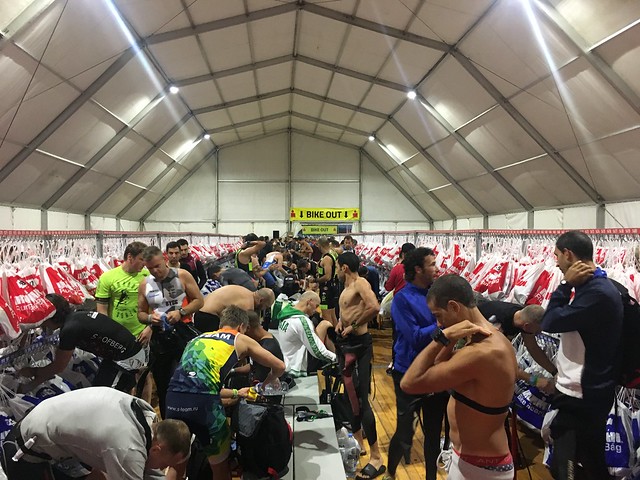 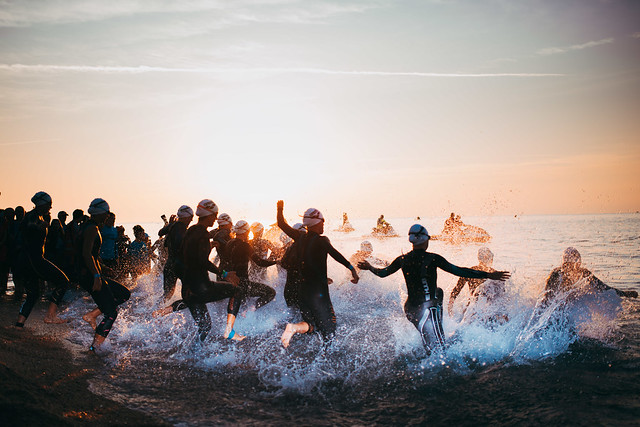 Not my photo, or my start, but it was a pretty morning. (Getty Images)

Of the 3,000 athletes, 300 of us were of the F variety. My day started with the male locker-room experience I’ve never had, and DUDES continued to be a bit of a theme throughout the day.

The age-group rolling start was all kinds of chill. We lined up in corrals, and race staff at the ends of each raised and lowered their outstretched arms in time with some kind of metronome, letting 4 or 5 athletes through at a time. It was almost military-like, but with Ironman pump-up music in the background. I waited my turn, ran down the beach, and jumped into the sea. It was warm and clear, and like oceans should be, full of swells and currents and creatures. (All the things that my open-water training ground of Alta Lake is most definitely not!) Given that, I was elated to knock out a 1:04. (Bonus points: My Garmin recorded a 2.4-mile split on the dot. I don’t think that’s ever happened.) 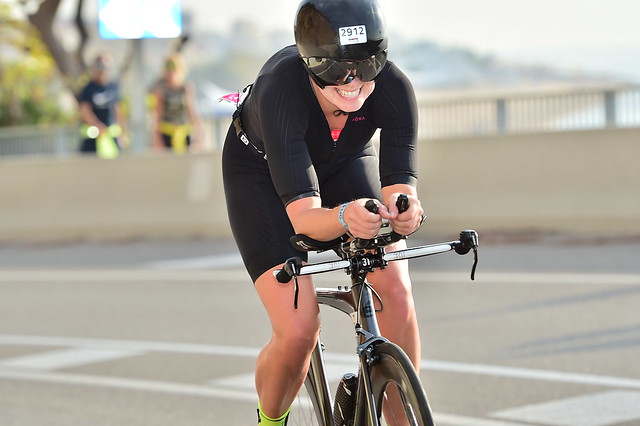 This was me (almost) the entire ride. 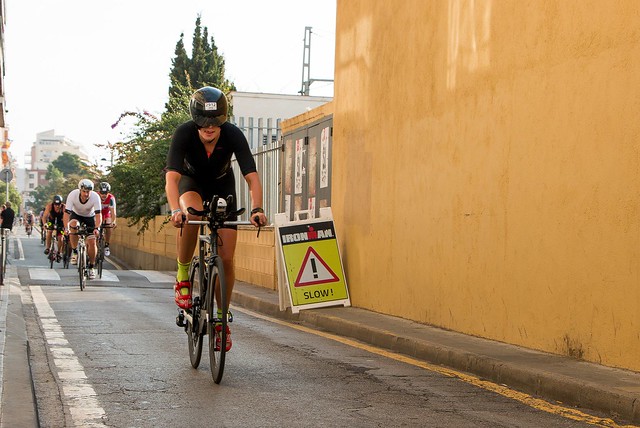 Tongue out, guns out…

If you want a bike split that starts with a “4” sometime during your triathlon career, this is your course. My plan was to go at “all day pace,” given that we were treating this as more of a training day. It was actually difficult to ride hard on this course, however, given the density of athletes. I would be humming along at a nice effort, then be completely overtaken by a huge pack of, wait for it, DUDES, and be forced to back off/soft pedal to get out of their draft zone, terrified of a penalty. (And the pens were packed.) I know, cry me a river, but riding this course required more group riding skills than I thought it would.

When I saw that I was sitting around 2:30 at the 90 km mark, I was consumed by hunger for a sub-5 bike split. I amped up the watts over the last half of the bike, but it wasn’t enough to make up for my somewhat leisurely start. Despite my best effort, after winding back through the speedbumps and cobblestone streets of Calella, landed me at 5:04. Looking at my watts over the day though, I am very very happy with that. 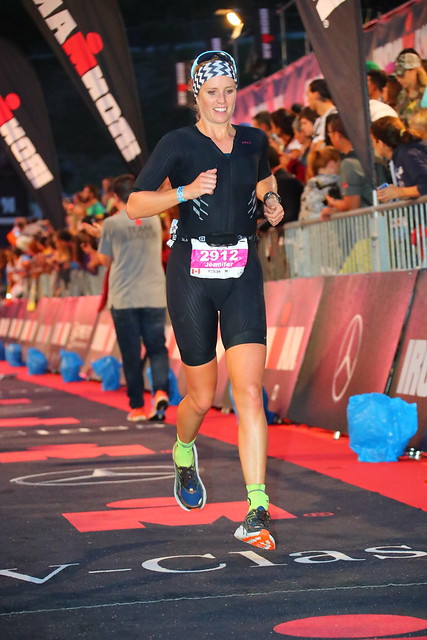 There was even a little bit of running that last 2k.

Off the bike, my Garmin reported 6:30:00 or some ridiculous race time I’ve never seen in T2. I gathered my thoughts in the change tent, ready to embark on none other than the Ironman marathon, aka, that 42.2 km gamut of feelings this sport is so good at exposing. I felt surprised (“Wow, I actually feel good, maybe I could PR!”) I felt thankful. (“You’re running, aren’t you?) I felt happy. (“Look at all of us out here on this perfect day in Spain! It’s so great to be alive!”) I felt guilty. (“Is this really your best effort?”) I felt self-deprecating (“You’ll just never be a fast runner. Accept that.”) I felt resigned. (“I don’t need to do any more of these.”)

I divided the race up into four 10k’s and tried my Copenhagen mantra strategy, but my mental game just wasn’t on.I think I sold myself short on the run. I gave up too quickly, chalking it up to injury and lack of training. I am sad to report that I didn’t give it my best. Yet, I probably smiled more than I ever have in an Ironman marathon, despite it being my absolute slowest. (Guess whose bike and run splits were about the same!) 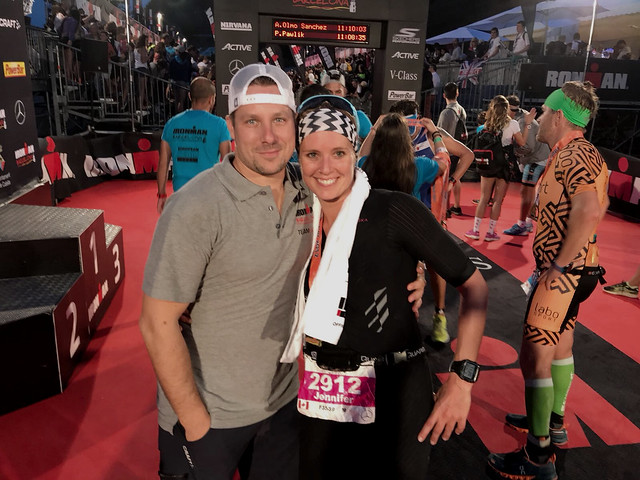 My friend and colleague medaled me at the finish. (And there’s the headband I apparently reserve for European races!)

But you know what? With five hours of running, you get to do and experience a lot. Like the two women busting their asses on rickety elliptical machines on the beach, or the old guy indulging his unrealized DJ at an empty cheer station stretch of beach, blasting “Last Night a DJ Saved My Life.” I got to chat with an American kid about our 2015 Copenhagen races. “Come on if you stay with me, we’ll break 11,” he says. (Sorry, kiddo, you can take your Wattie Ink ass and run along now.) I got to meet a lovely British man who cheered me on as he passed, telling me Jennifer was his wife’s name and that boy, could I ride a bike. I cracked up every time I passed the Irish and British spectators stationed at their beach bars, watching them get drunker as the race progressed, and their cheers brasher. (“Jenn-i-ferrrrr, you’re our favorite…”) I smiled at the little Spanish girls who’d yell “Chica chica chica!” every time they saw one of us 300 athletes with boobs.

I let all these little moments wash away my inner negative Nancy, and I followed that damn marathon to its bitter, dark end, even sprinting the last 2 km. Having watched my goals morph and shift throughout the day (a sub-5 bike split? A PR? Breaking 11? Beating my first Ironman time of 11:19?) I accepted that none of it was in the cards, and took my 11:20 finish for exactly what it was, leaping into my friend Stefan’s arms genuinely and thoroughly happy. 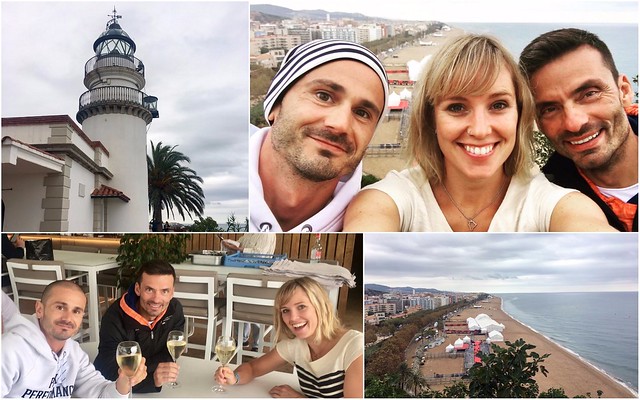 Sunday: To the Lighthouse! 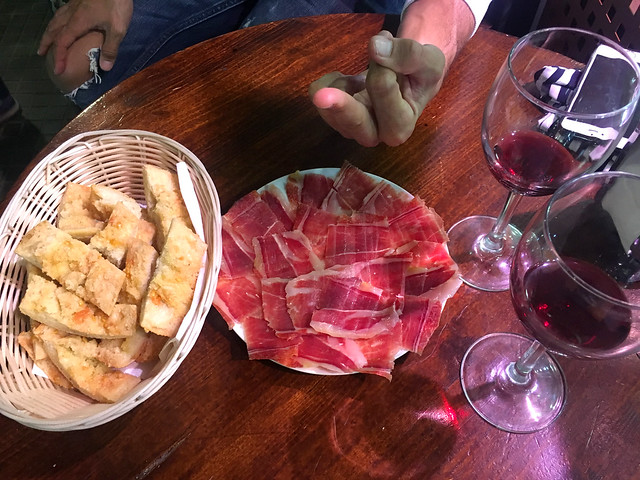 This is what most of my meals looked like. (Minus the cheeky middle finger.)

As per usual, post-race fun is half the reason I do this sport. (Beer is the other half, though the two are clearly not mutually exclusive.) After grabbing a small snack and gathering my bags, I headed back to my hotel (St. Jordi—if you go, and can swing it, stay here), showered, and relaxed for a bit with my phone.

Hunger set in shortly and I set out around 11:30 to find food. After trying five places only to learn they were no longer serving food (come on, Spain!) I finally found a beach bar full of golf-shirt clad tourists dancing to Jimmy Buffet and plunked myself down for some overpriced tapas. It wasn’t long before my athlete wristband gave me away and I was having another beer with two new friends from Slovakia. 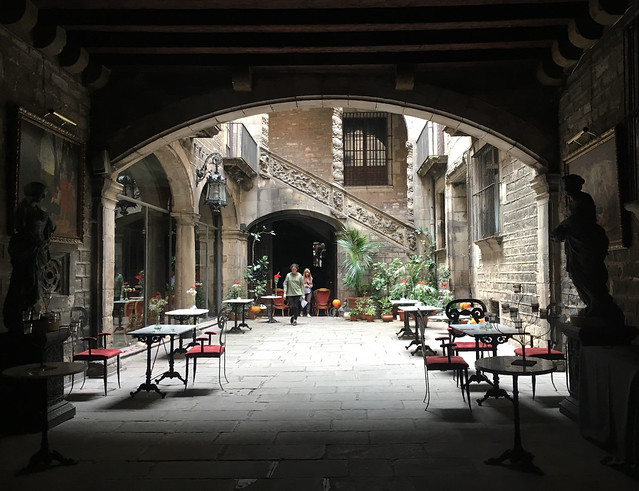 I fell in love with El Born, the neighborhood in Barcelona where I stayed. 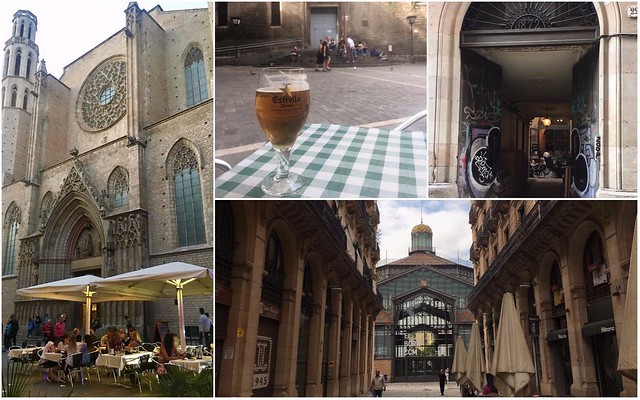 Cathedral de Santa Maria at twilight; dining alone in a square at noon; the place I ate my last dinner; the El Born Cultural Center.

I left full, tired, and with plans for cava and cortados on the beach the next morning. Well, not full enough to pass up a stop at McDonald’s on the way back for a flurry—along with the entire British athlete contingent. The central strip was hopping at 1 am, like an Ironman carnage parade of bikes and foil blankets and salt-stained Lyrca. It was awesome.

Sunday passed in a haze of said beverages, gathering my gear, hiking up to the lighthouse, then saying goodbye to one of my new friends. A quick nap, and later in the evening I was introduced to Iberian ham (acorn-fed ham) and it was all the jamon and all the wine at a hole in the wall appropriately named Porcus. We made a brief appearance at the Ironman after party, and I was out cold by 2 am. 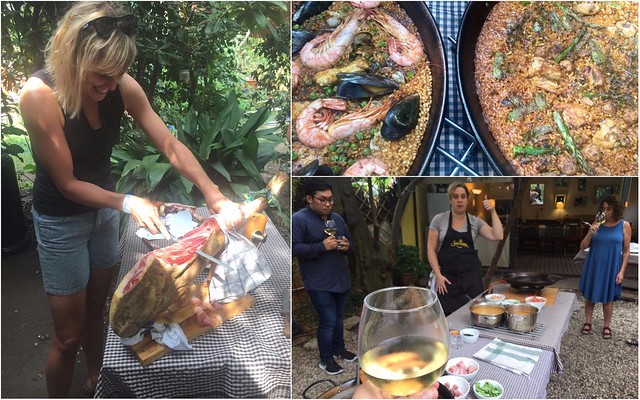 My first Air B&B “experience”: “Paella in a Secret Garden.” 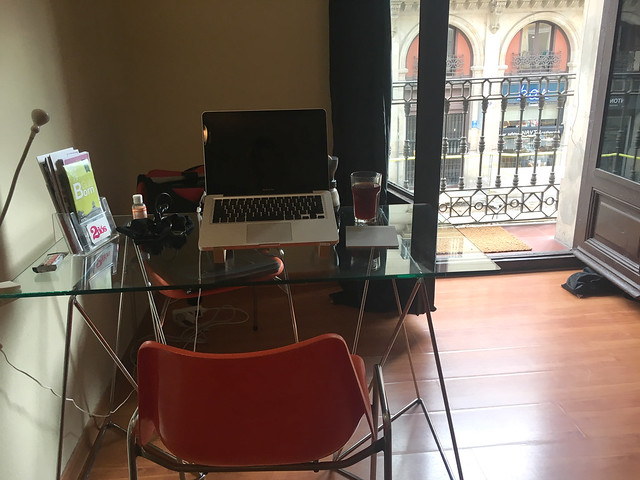 My home office for three days.

On Monday morning I took the bus back to Barcelona for three days of sightseeing, work, and pretending to be a Barcelonian. I figured I was all the way over there, might as well grab a room of my own, a good wifi signal, and hunker down from 2-10 pm to work every day. It was perfect: The mornings were mine, I’d plop myself down at my desk during EST business hours, and then grab a 10 pm dinner.

I slept like a jet-lagged Ironman zombie who hadn’t had a snore-free room to herself for 6 days. I took a paella cooking class in a garden, and met a Canadian journalism professor and a darling couple from LA. I watched Catalans make history protesting in the streets. I wandered aimlessly, ate lunch in a placa by myself, drank too much wine, and tasted too few new things. 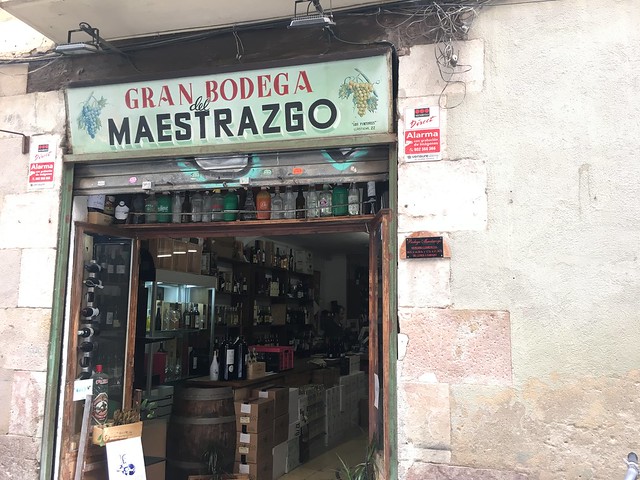 Of course I had to buy wine here. 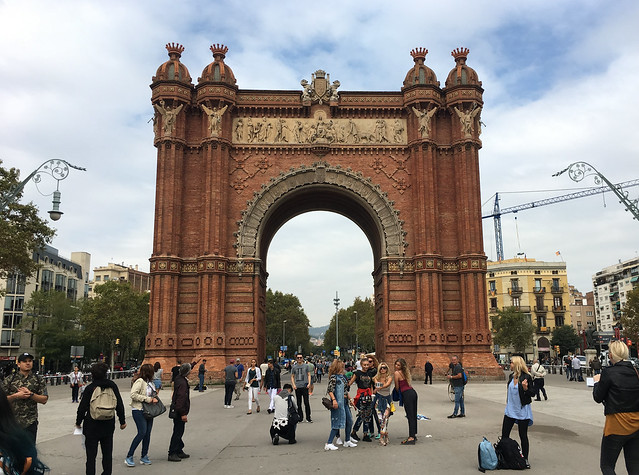 On my last day, I took in Picasso’s oeuvre, got stung by a jellyfish (new experiences!), and met a wacky bunch of Russians and Americans on the beach who insisted on buying two crazy triathletes a liquid lunch.

And then, I packed up my stuff and flew home, full of ham and memories. 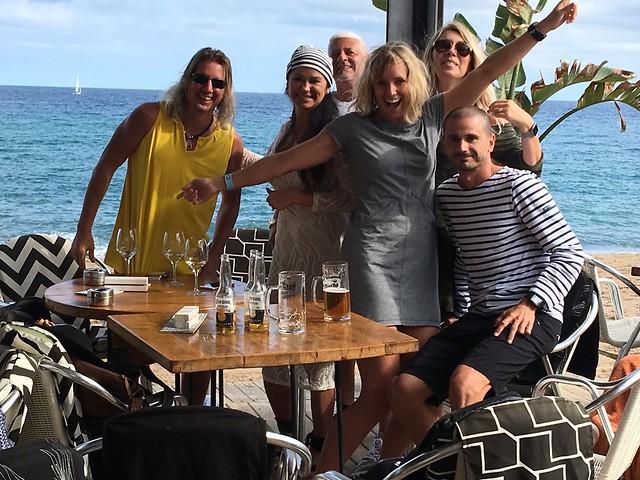 Thanks to Counting Crows for the title, and for one of my favorite songs ever.