Last week, life took a turn for the better.

Over the last few years, the future (in terms of the devilish details) has been a scene out of a window blurred by fingerprints. It was as if I knew a beautiful view was right there, I just couldn’t see it yet. It was something I tried to grasp—to touch and hold on to—but never could. Dealing with that took a lot of patience, not to mention manic triathlon training and a hell of a lot of yoga.

On Thursday, a patch just big enough to see through was cleared. And on the other side, things look even better than I’d imagined. My husband was offered a job in Vancouver, B.C., and will be moving there in three days. I’ll join him in mid-October, after the busiest two months of my work year (and my upcoming race!) are over. 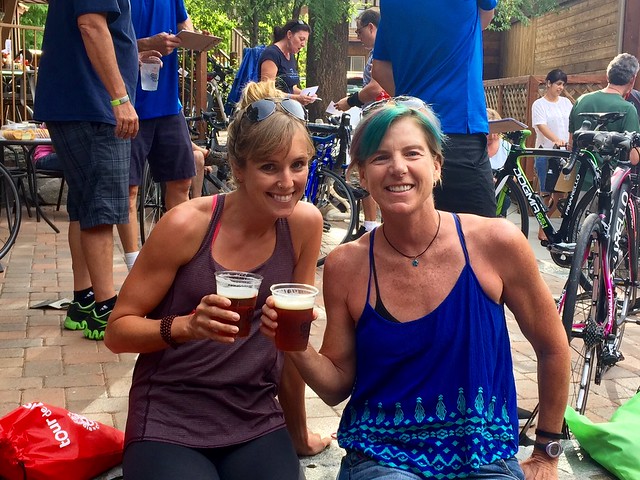 In some ways, I envy him—packing last visits with friends into his remaining time here, throwing a few outfits into suitcases, jet-setting off to reconnect with old friends and begin a new chapter, while I being a longer, more drawn-out goodbye. But that’s my choice, and what I think is the saner one.

I felt a little guilty for heading off to the mountains for a training getaway on the last weekend he and I would spend together for two months, but it had all been planned and paid for. Plus, I was looking forward to banging out a quality training weekend at altitude just three weeks out from my race. 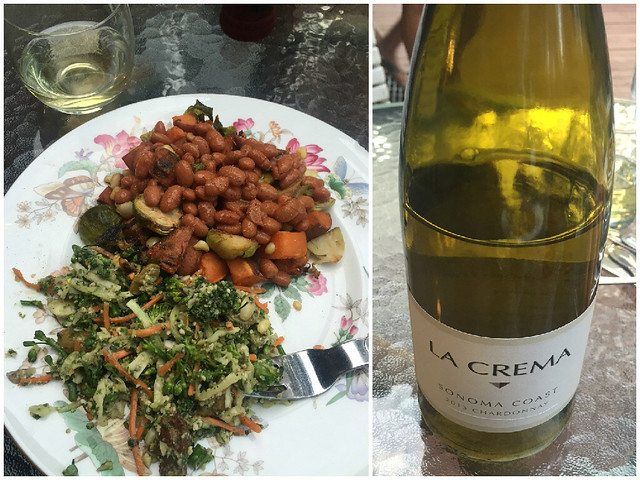 After a glorious swim in the Cove Friday morning with Robert and Jenna, which inspired cries of “why oh WHY don’t I do this more often!?” I worked, packed, and was off with Julie by mid-afternoon. We arrived in Big Bear, a not-quite-as-sleepy-as-Idyllwild mountain town in the San Bernadino Mountains. We picked up our Tour de Big Bear century ride packets, and Julie made a bee-line for the beer tent.

Once settled with our teammates at our Air B&B (aka the “Granny Mansion”), Julie whipped up dinner to enjoy on the deck in the dying light. Afterward, we chatted, prepped for the next day’s ride, and were in bed at the  triathlete golden hour of 9 p.m. 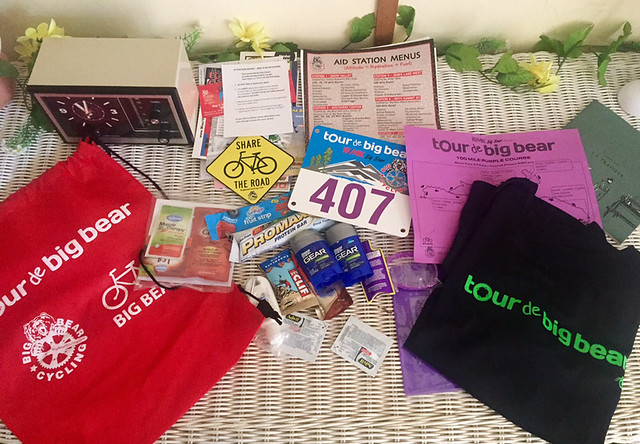 The town of Big Bear Lake sits at almost 7,000 ft above sea level, where all four of us live and train. With three out of four of us gearing up for late-summer Ironmans, our training plans for the weekend—a tough 100-mile ride and brick run on Saturday and a long run on Sunday—would offer a boost of confidence and fitness. For the two racing Ironman Lake Tahoe, it also served as an altitude litmus test, which they passed with flying colors.

We had coffee and breakfast at the house and rolled out into the crisp mountain air by 6:45. The race started at 7:00 a.m. sharp, as promised. 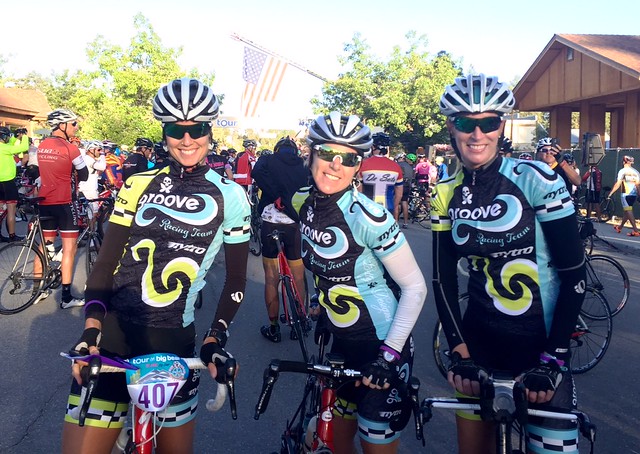 Getting ready to show off our Groove kits.

I rode the first 40 miles with a teammate and friend I haven’t talked to in awhile, and the miles slipped by effortlessly. All of us had been looking forward to the event’s “legendary aid stations,” and while I didn’t want to eat too much, I must say, I had to sample the bacon. Aside from that first stop, most of my stops were quick and dirty: fill bottles, reapply sunscreen, pee, grab a small snack, and off we go. (I passed on the beef ribs, boiled eggs, marshmallows, boiled potatoes, and turkey wraps, opting instead for things like bananas, strawberries, pretzels, and a bite or two of dark chocolate.) 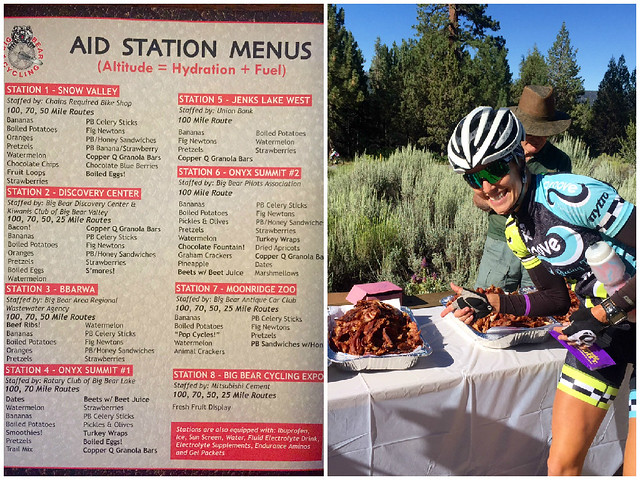 The event is known for its “legendary aid stations,” though none of us saw any beets. :( And yes, I ate bacon.

At approximately mile 40, the 10-mile climb to Onyx Summit begins. I kept my effort steady, happy I’d brought my road bike, and tried not to count down the miles. The clear, comfortably warm day rewarded us with views that got better and better as we climbed.

The reward on the other side was a 10-mile descent into a deeply wooded, shady area dotted with Scout camps and friendly roads.

After another 10-mile jaunt in the woods, you approach Onyx again from the other side—the fast, smooth descent now but a distant memory. Then it’s another approximately 10 miles to the top once again. You’re spit out into Big Bear City, where I made the mistake of thinking “Wow, I’m at mile 85, I’ll be home in an hour!” I was, but not without my fair share of suffering!

My severe, muddy-headed bonk over the last 10 miles was definitely my own fault. a) I hadn’t eaten enough the hour previous, and b) showing off in a “this is way too serious for a century ride” three-person pace line for 30 minutes were probably not wise choices. The last 10 miles also contained a torturous residential section with a 14% grade. (I swear the organizers must have been gloating as they planned the route: “I know how can we get those suckers to 100 miles!”) 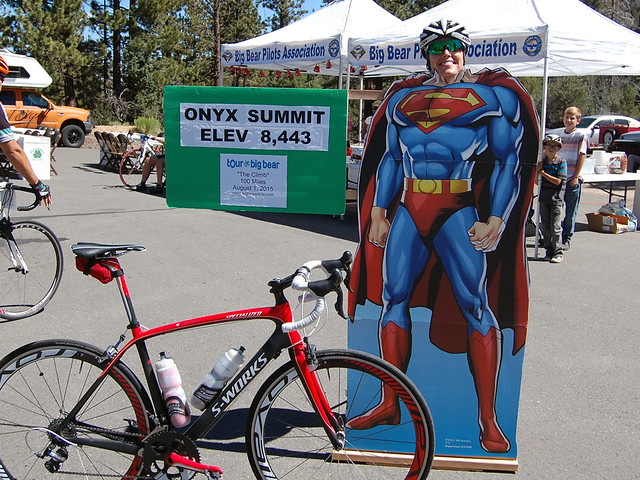 Fun little photo op at the top of Onyx Summit. 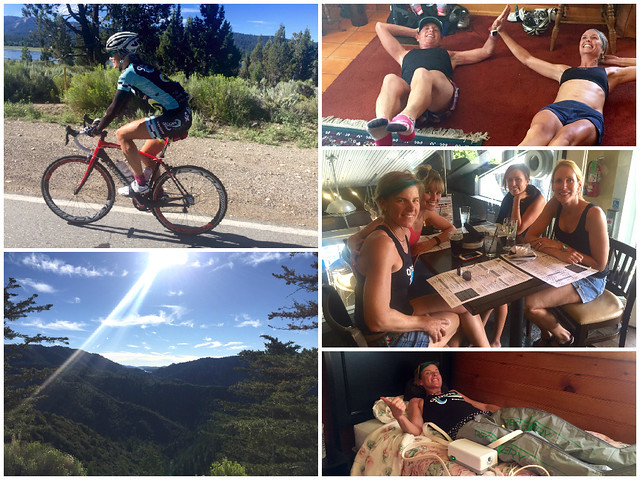 How to ride 100 miles in Big Bear: Ride, take pictures of the scenery, ride, eat, climb, eat, ride, bonk, run off the bike, do ab work, go to Big Bear Brewery, sit in the recovery boots.

I must have been pushing 50 watts over the last 10 minutes as I soldiered on in a calorie-deprived fog. I rolled through the finish line and went straight to the food tent where I downed two lemon squares and a handful of fruit, and got back on my bike to head to the house and—OCD alert!—get my full 100 miles in. I proceeded to get lost, only to be rescued (mid-Google maps rant in the middle of the road) by a much smarter teammate who’d programmed the directions into her phone.

After the lemon squares kicked in, I pulled myself together and joined Julie and Courtney on a 30-minute run off the bike. We ran back to the finish line, grabbed more food and water, and trotted home up hills that might as well have had evil faces etched into them. I collapsed on the floor, Pellegrino in hand and legs up the wall, until Julie came in from her hour run off the bike and forced me to do abs with her. A

We cleaned up and hit Big Bear Brewery for some post-race debriefing and beer, and learned that in mountains, they ID anyone who looks under 60. 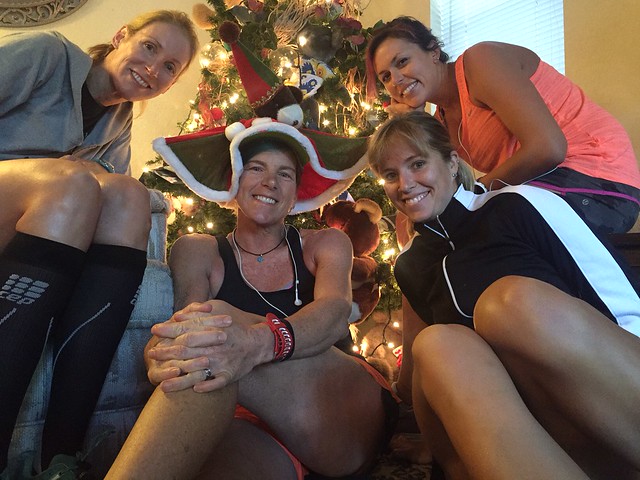 Family picture by the Christmas tree. 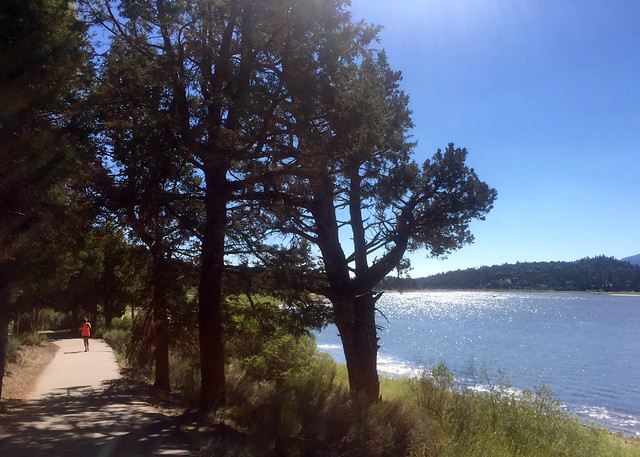 Sunday morning we dragged our fatigued “I feel like I just did an Ironman!” bodies out of bed, snapped a family picture by the Christmas tree that’s clearly set up all year long, and headed to the Alpine Pedal Path on the north shore of the lake for two hours of running fun.

I was not feeling particularly sore, just tired, and quite honestly not thinking the run would go too well. However, I was reminded again of two “triathlon truths:” the longer you go in this sport (literally and figuratively), the faster long workouts go by. Second, everything (for me at least) is better with company. Around and around we went, out and back, back and forth, along the shady paths until our roads ended at Vons, shining like a beacon of Kettle chips and Kombucha. 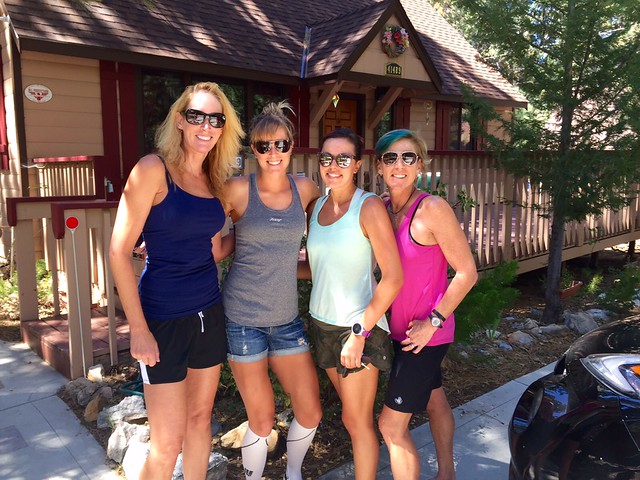 Group pic in front of the Granny Mansion.

I highly recommend Big Bear for a getaway training weekend whether you can make it out for the century ride, or simply on your own. I’m glad I finally got to visit this California mountain town, as my days here are numbered. The town is stocked with amenities, the event is well organized, and there are plenty of affordable Air B&B’s and VRBO’s for the taking. Some even come with kitschy decorations and perma-Christmas trees, so act now!

Thanks to Nuun for the hydration, Smith Optics for the shades, Giro for the lids and shoes, Bonk Breaker for the cals, and to Nytro Multisports and Betty Designs for keeping us well-oiled and well-dressed.