The two weeks since returning home from summer work trip #1 followed the following pattern: Week one: jump back into training with a sudden hunger and vigor, likely due to the mental and physical break (and extra gelato to burn). Week two: face the repercussions of said overtraining.

Today marks the start of week three, and I am cautiously optimistic.

Since St. George, I haven’t really been sure what I was training for. I prioritized work, happy to train for the love of training, and maintain my fitness just in case. You never know when a great opportunity to race is going to come along, right? 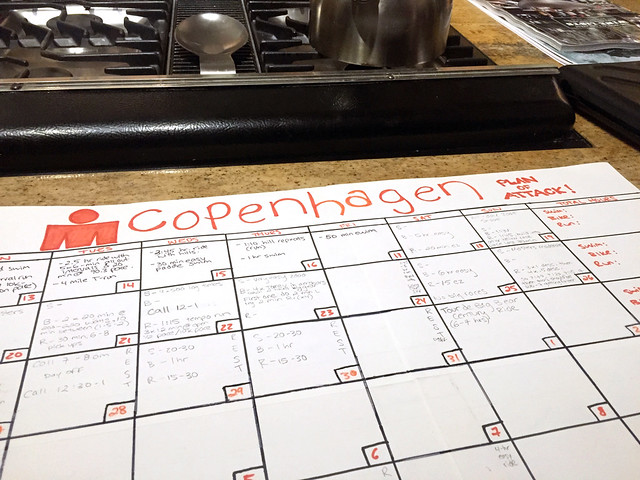 Ack! Another somewhat last-minute Ironman for me. Planning my 5-week attack, with a friend’s help.

Recently, the stars aligned for me to race Ironman Copenhagen on August 23rd. There are a lot of factors that go into deciding to race an Ironman, and though I’m not a “signs” person, this one has worked out far too well (knock on wood!). I am heading to Europe anyway, I have a place to stay, and I’m getting help with shipping my bike (more on that later). How could you pass that up?

So here we are again. It’s like Groundhog Day. Where’s my calendar? Is it too soon? Am I fit enough? How can I maximize my time? Clicking the register button just five weeks out from an Ironman isn’t ideal, but it’s not as if I’m starting from scratch. I was torn about doing another Ironman on sub-par prep (ahem, Arizona), but then I had three ah-ha’s: 1) even when you think your training has been ideal you can be disappointed (ie: South Africa); 2) there’s nothing wrong with racing for the experience; and 3) as my friend and recent Ironman Switzerland champion Beth wrote recently, there’s always a chance that “the imperfections might just be part of the perfect prep.” 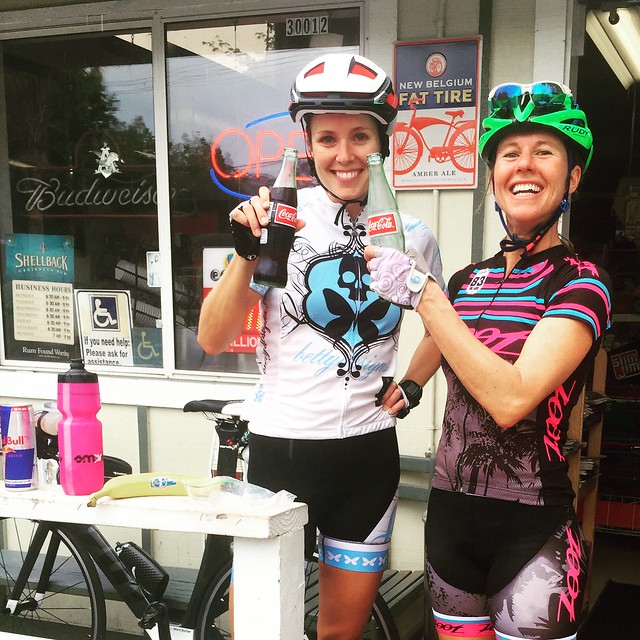 Cheers to Mexican Coke and surviving the rain with Charisa.

I had an inkling that I might be able to do this race before I left for the Coeur d’Alene/Germany extravaganza, and so snuck in a few longer sessions just to see. A 14-mile run went OK, and as usual, long rides were great. While traveling, I tried to enjoy the forced rest and focus on the adaptations I was allowing my body to make rather than feeling guilty.

Traveling meant I was not on my bike or in the water for about two weeks—again, not ideal. But who knows, maybe it actually did me good. I have a tendency to jump in on friends’ workouts and push myself hard day in and day out. Perhaps three consecutive weeks of 8-11 hours of training actually helped dig me out of a hole. 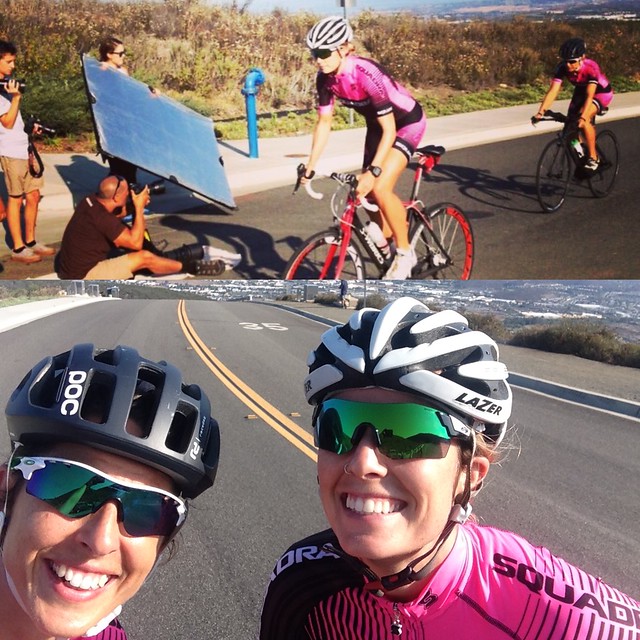 Katie and I pretty in pink for a recent photo shoot.

Upon returning home, a friend helped me plot out a plan: Two big blocks, each followed by big rest. I suited up and started after it, the smell of a new goal strong and sweet. As I mentioned, I probably overdid it that first week, squeezing in as many Masters swims in as I could and hitting every run and ride hard with hills and speed work. I capped it all off with a 7-hour photo shoot on one of the hottest, days of the summer yet. By the time I got home, had a fever of 101.5. I’m not sure if it was overtraining, dehydration, or a bonafide bug, but I haven’t felt that ill in a long, long time.

I felt better on Monday, but still weak and without much of an appetite. My guilt got the better of me, though, and I attempted my missed Sunday long run that night along the coast (bad triathlete!) I continued to feel better, but all of last week’s workouts ended up feeling like slogs: Barely hanging on to a friend’s Tuesday bike intervals + run off the bike, Wednesday’s tempo run on the treadmill because I felt too lazy to deal with the heat + solo swim paddle session, Thursday’s Torrey Pines aerobar climbing with a friend + Masters, and Friday’s 4500-yard swim followed by long run #2 of the week (broken up into 1 hour on the treadmill followed by an hour outside to shake things up. 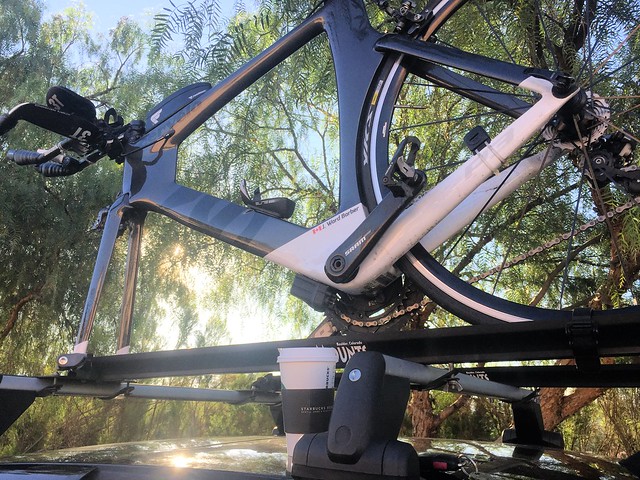 It’s been months since I took this beauty out of the ‘hood for an adventure.

A tiring week made me legitimately nervous about attacking the 5+ hour Henshaw loop on Saturday—a pretty, but somewhat intimidating loop just inland from us. Success number one was going with people, as I don’t honestly think I would’ve made it without them. Success number two was staying home Friday night to prep and rest up. I enjoyed my new long ride success breakfast (Starbucks egg sandwiches, accidentally discovered while waiting out a thunderstorm with Hillary last weekend), and arrived at Lake Hodges early and ready for a big day. 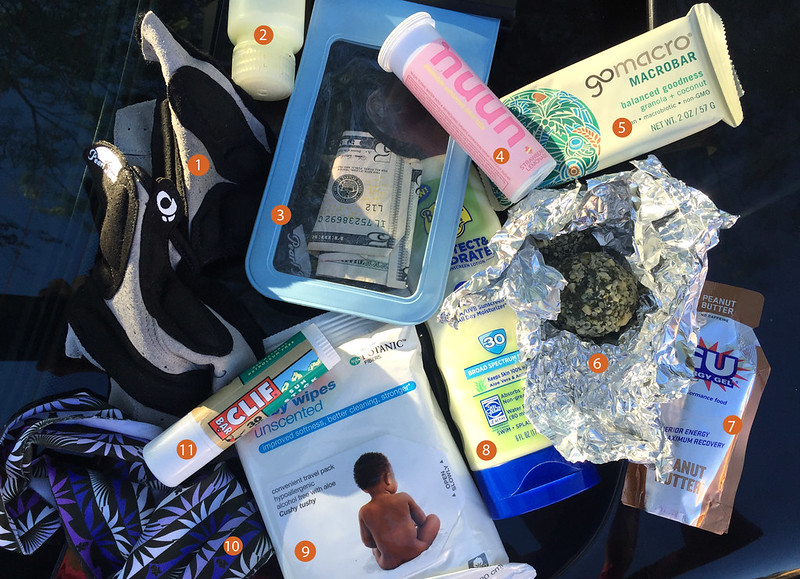 This is by no means an exhaustive list, but I started snapping pics while waiting for friends and found this amusing.

1. New Pearl Izumi cycling gloves—I can’t ride in the summer heat without gloves!
2. Chamois cream by Betwixt
3. iPhone case and cash
4. NUUN strawberry lemonade—so refreshing!
5. GoMacro granola + coconut—real food, digests so well.
6. Homemade green “Dragon Eggs” experiment—held their shape well and tasted delish.
7. Peanut Butter GU before hitting my run off the bike (I usually use Honey Stinger but had this random old GU lying around and you can’t argue with peanut butter)
8. Sunscreen—I don’t normally have a brand preference, though the company that makes the above chamois cream makes an amazing ($$) one.
9. Baby wipes for after the workout—decency, people!
10. Betty Designs headband to tame the madness.
11. Face-specific sunscreen for re-application throughout the ride.

Thanks to good sleep and organization, the ride was a success. My legs felt fatigued for the first hour, so I held back and built into the ride. (Thankfully, others did too!) Salt and vinegar chips at Santa Ysabel and lots of good fuel throughout the ride meant for a fresh 20-minute run off the bike, which felt good despite the heat. I got fro-yo on the drive home, Mark made us a delicious dinner, and then we headed to friends’ to meet their new Weimaraner puppy (adorable!) and have a few beers. 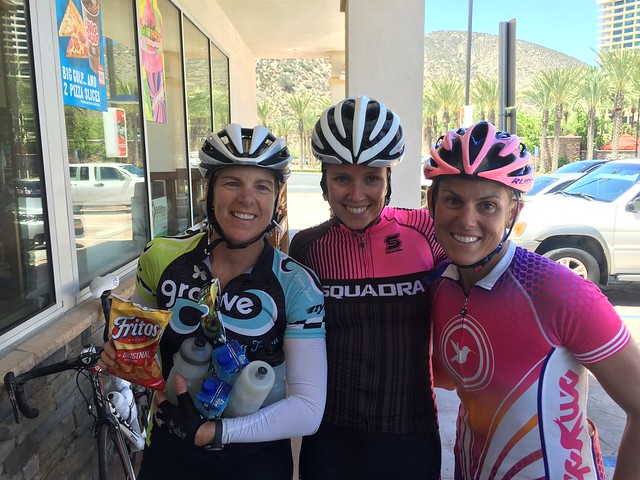 Perhaps my last Henshaw loop for a while, with Hillary (awesome new ride buddy), Julie, and Courtney. 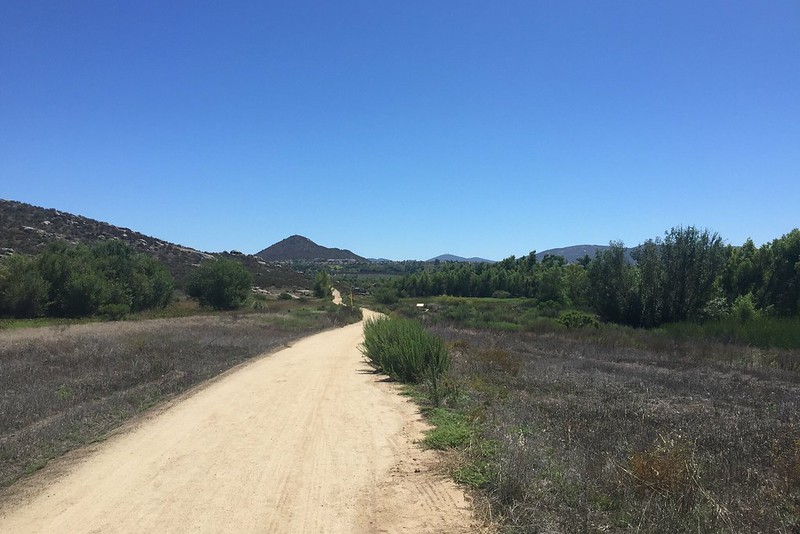 Hot and dry run off the bike in the parched lands of San Diego.

Yesterday was one of my more productive and enjoyable Sundays in a long time. I slept in, went to 9:45 Masters, enjoyed a long coffee in the sunshine with a good friend, stopped by Just Peachy for groceries, banged out a bit of work, napped (?! I never nap!), tracked friends racing Ironman Canada all day, and put off my track workout until 5 but nailed it, had a well-rounded dinner thanks to the hubby, and topped it all off with wine and cheese in our backyard with our neighbors and two other good friends. As I tucked into bed at 10:30, I couldn’t help but notice that the day had brought the perfect blend of work, rest, and rejuvenation.

It’s those rare and lazy summer nights where I can get lost in the “now” and the future becomes as insignificant as the crumb of food lost to the dogs at our feet. If only I could harness that more often. 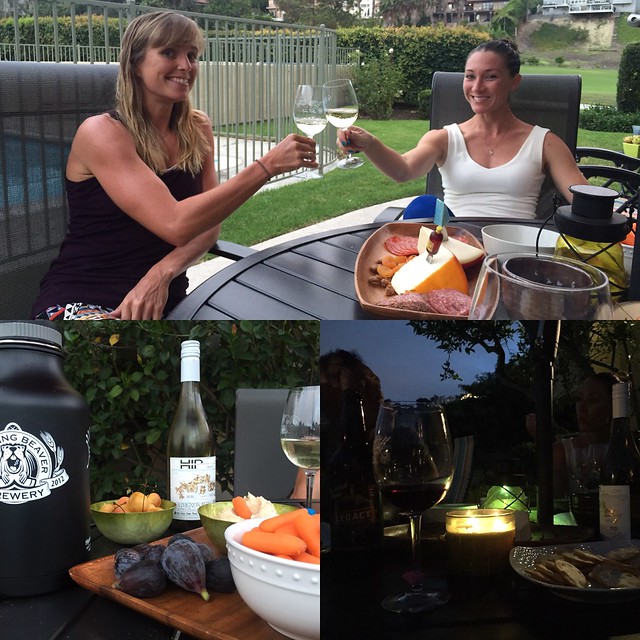 Backyard wine/cheese night (woah! swimmer’s arms!) until the “wee” hours (for a triathlete)

Today was supposed to be my last hard day before a four-day rest block, but I just couldn’t do it. Fourteen days straight of hard workouts, breaking only once due to a one-day bug, and I’m toast. My muscles are deeply fatigued and I feel foggy and unmotivated. I was also super clumsy all day yesterday, and can feel my body telling me it needs a break. This feeling is so unique to Ironman training and just LOVE it. Most of the time.

And so today, despite the perfect, not-too-hot weather, I sat my butt down and got lost in work. I’ve heard good coaches say “It takes courage to rest;” I for one am happy to have such consuming distractions so I don’t have to rely so heavily on the courage part.

Here’s to four days of rest before I hit the next block.

4 thoughts on “countdown to copenhagen”