I left for back-to-back work trips on June 25th with the familiar feeling of being thrown onto a battlefield. If you’ve ever traveled anywhere while training for an endurance event, you know the struggle well: Uninhibited gluttony and laziness versus basic fitness maintenance.

How many times have I boarded planes with the hopes of logging some epic two-week run focus fueled by airport salads and sparkling water? 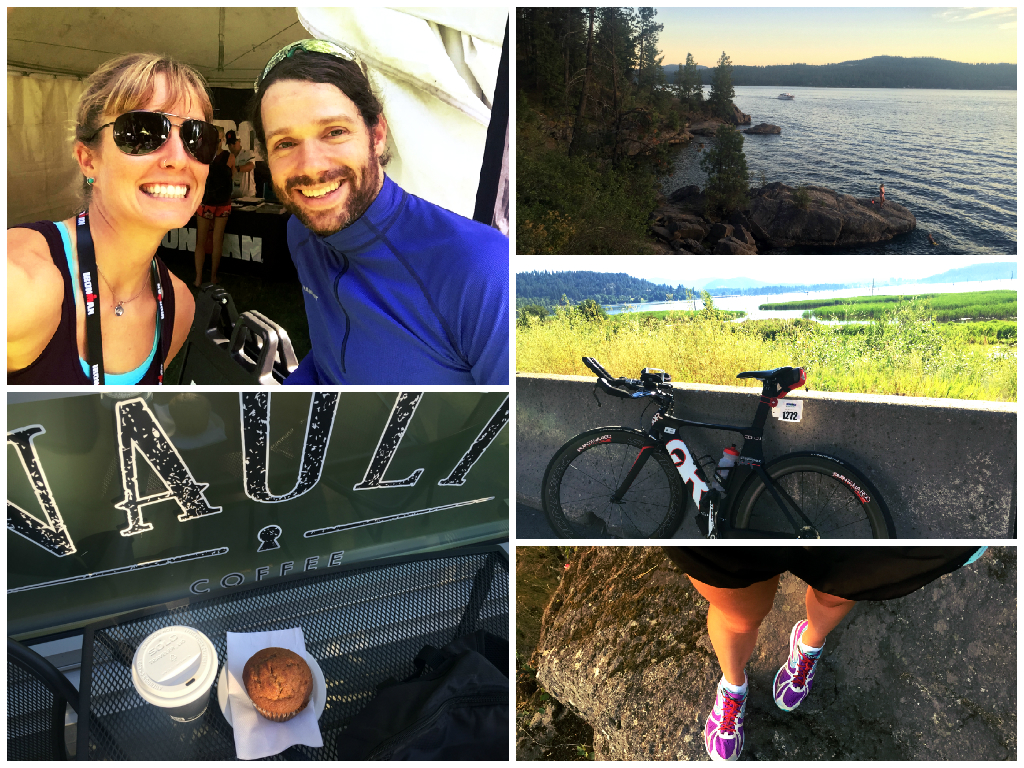 Alright, it wasn’t that bad. I think I only took two days completely off, and I ran as much as I’d hoped to—even if it wasn’t terribly fast/hilly/long. Regardless, I was active: I walked a ton, logged some serious commuter bike miles, and enjoyed two swims in a 50-meter pool in my friend’s home city of Regensburg.

As far as those salads go? I started off with lofty intentions, but as the trip progressed, the German bäckerei and eis (gelato) places on every street corner were stronger than I was. Maybe this is a symptom of relatively infrequent international travel; I’m sure that the more you travel, the easier—and more important—it is to stick to your routine. I’ve probably just watched too much Bourdain and can’t bear the thought of missing that amazing hole-in-the-wall restaurant everywhere I go. 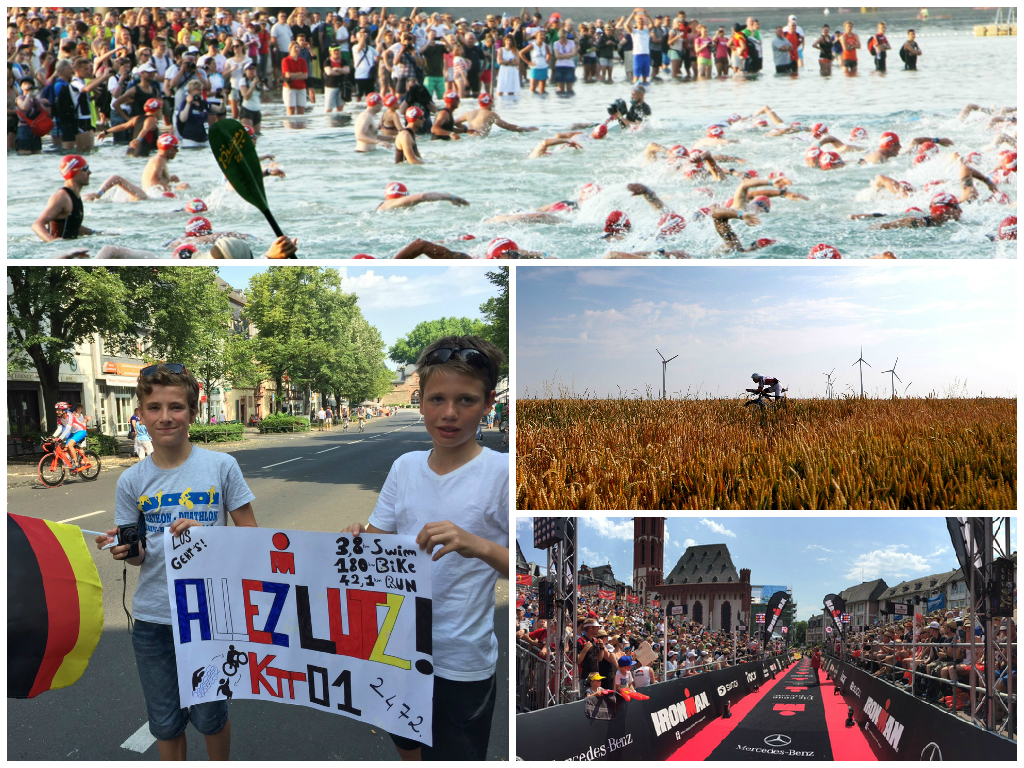 Aside from a busy work schedule, weather was my only other excuse for reduced physical activity, as record-breaking heat followed me from place to place. In Coeur d’Alene, Idaho, the event I was working saw a high of 106F/42C, and when I looked at the forecast for Frankfurt the following weekend, all I could do was laugh. Neither of these two locations is known for conditions like this, which, my petty “training” aside, posed other far more serious concerns.

The heat intensified Coeur d’Alene’s piney aroma, and I tried to enjoy it despite the heat. My good friend Jordan raced, and, get this, let me borrow his bike the day before the race for a spin. The guy is far too relaxed. (And nailed an 11-hour race despite the heat. So proud.) Other than the ride I enjoyed one late-evening run/hike along the lake, a swim in the lake, and a few runs in the AC at the resort fitness center. On my way back to Spokane, I stopped at a rambunctious inner-city YMCA for a quick swim—one of my favorite things to do when I’m on U.S. soil.

Home for just a day and half, I swam, rode my bike, and did yoga in between prepping for a trip to Germany. 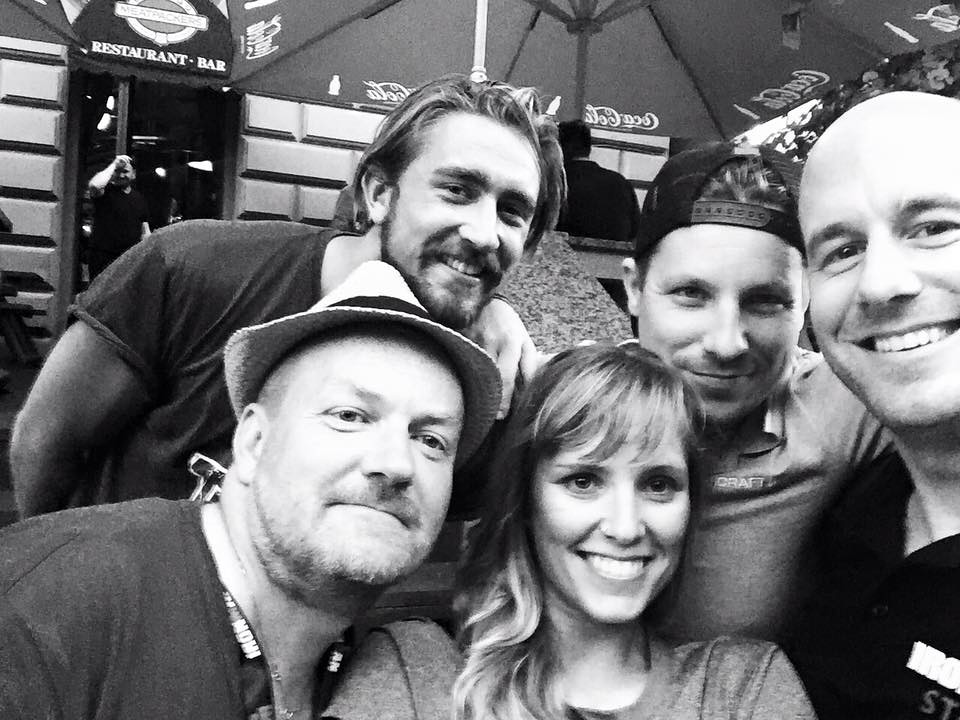 Frankfurt welcomed me all too warmly. To add to the fun, my hotel’s overworked AC deemed the fitness center an inappropriate room to keep cool, and so running there was worse than running outside.

Race day was a 14-hour circus of beeping radios, exploding text threads and overheating electronic devices. Thanks to good-natured and funny colleagues, however, it was also a lot of fun. I loved getting to see how our European team does things, not to mention watching an electric day of swim-bike-run, finishing in the heart of Frankfurt. 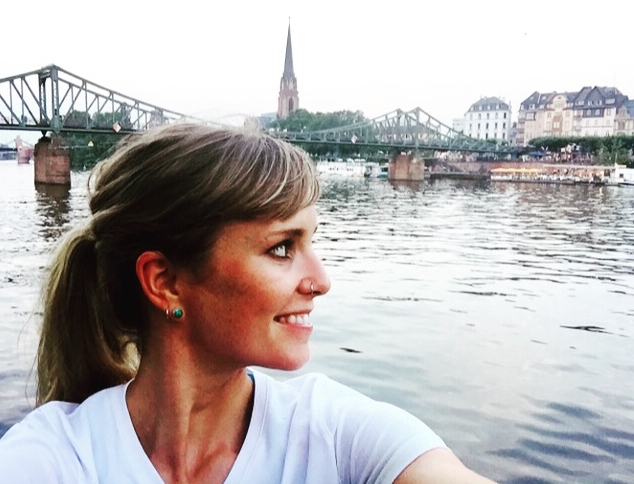 Scenes from one of many evening runs. 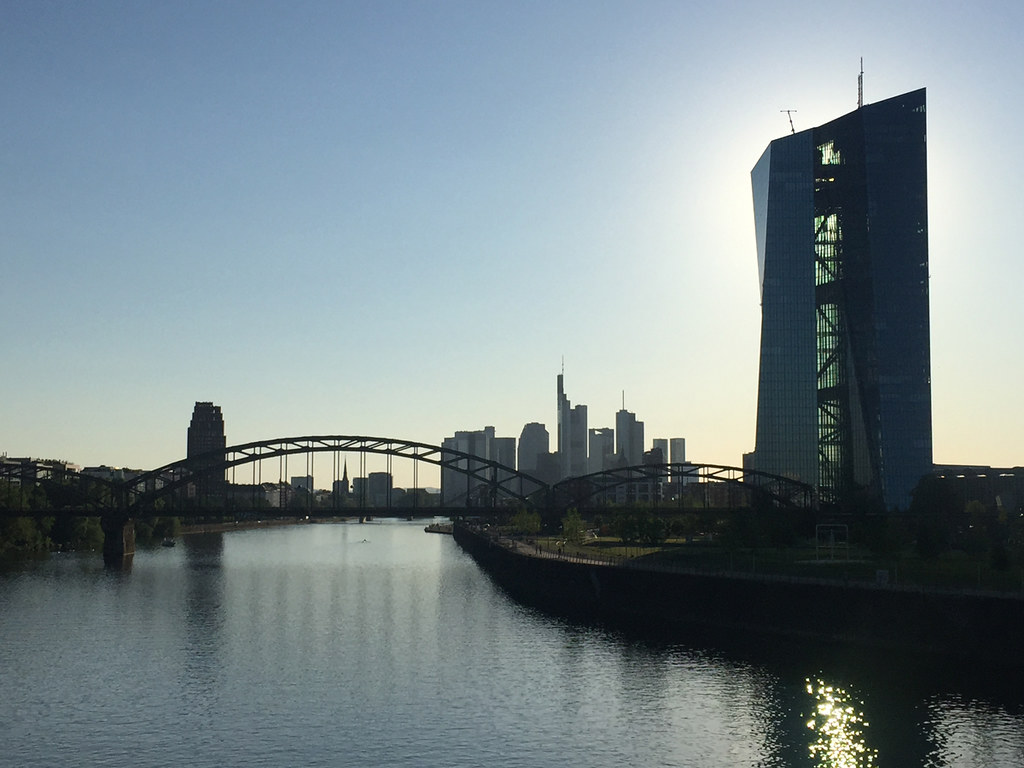 The days following brought more bearable temperatures, and I enjoyed a perfect evening run along the river. The style of the buildings and bridges and the curve of the river actually reminded at times of my home city, Winnipeg. There were far more stray beer and wine bottles, of course, but in the fading light, a particularly charming urban beauty.

I dubbed Monday as “me day”—rather, “afternoon,” due to my staying out until 3 a.m. race night. (Jet lag has proved harder to kick in my old age and I suffered from an alternating 3 hours/7 hours per night sleep schedule for most of the trip.) On my way to a Yelp find for coffee, I stumbled upon another gem, and sat and talked to the owner for an hour. After my Americano, he made me a cappuccino on the house, and then fed me his home-made iced tea and seaweed salad. I then wandered around the posh and clean city of Frankfurt, which is just how I’d imagine one of Europe’s financial hubs to be. I had dinner al fresco with a colleague at an Italian café, and the next morning it was off to the train station. 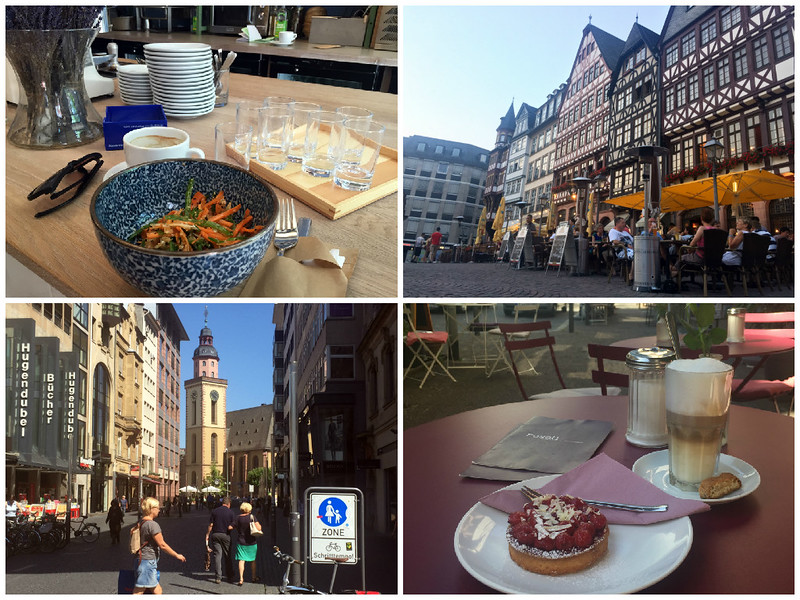 “Me day” Monday: Seaweed salad and good coffee, wandering, and a himbeeren tarte and latte machiato for a pre-run snack.

Regensburg, just 3 hours south of Frankfurt by train, happens to not only be one of the prettiest cities in Germany but the home of one of my oldest and dearest friends. When I discovered I was heading to Frankfurt for work, I couldn’t pass up the opportunity to visit her, and meet her one-year-old son, Johann. Of all the alluring European cities I’ve yet to explore, my third time in Bavaria’s well-preserved medieval city didn’t disappoint. 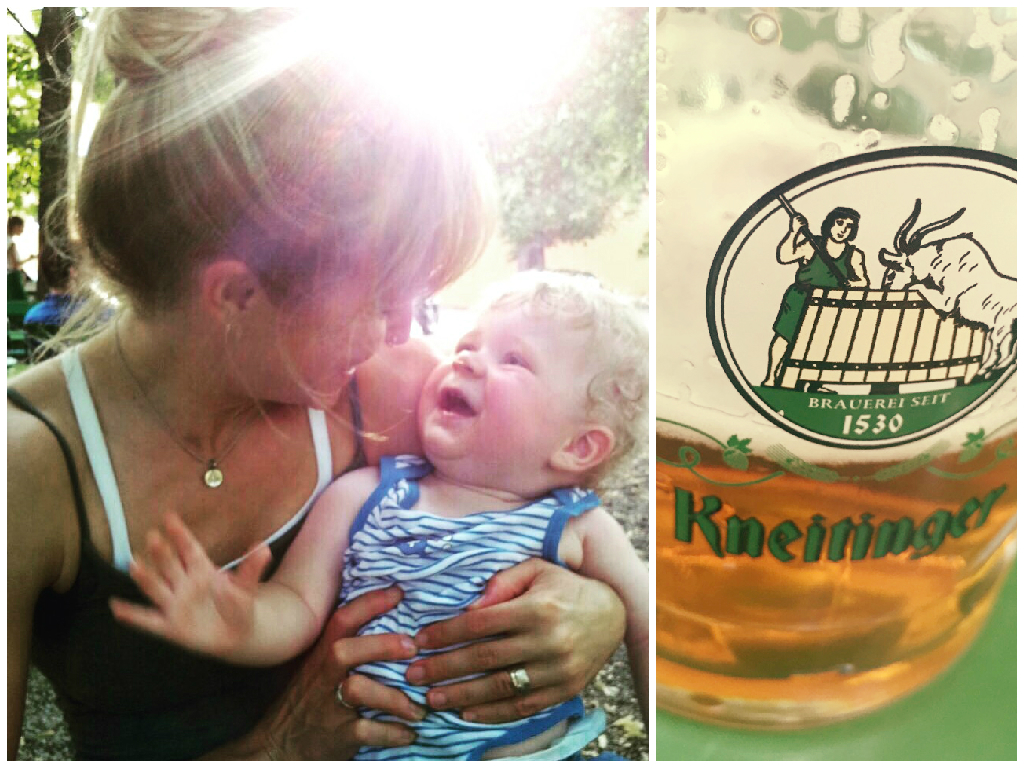 Me, Johann, and der Kneitinger.

The day I arrived, Regensburg was suffering from the tail end of the heat wave, and so we caught up at a local Biergarten until poor little Johann couldn’t take the heat anymore. After a (real, live!) thunderstorm, the heat broke and the rest of my time there the weather was perfect. Sunny days and cool breezes, as well as the kind of warm summer nights, intermittent rain, and vibrant green that I miss living in San Diego. 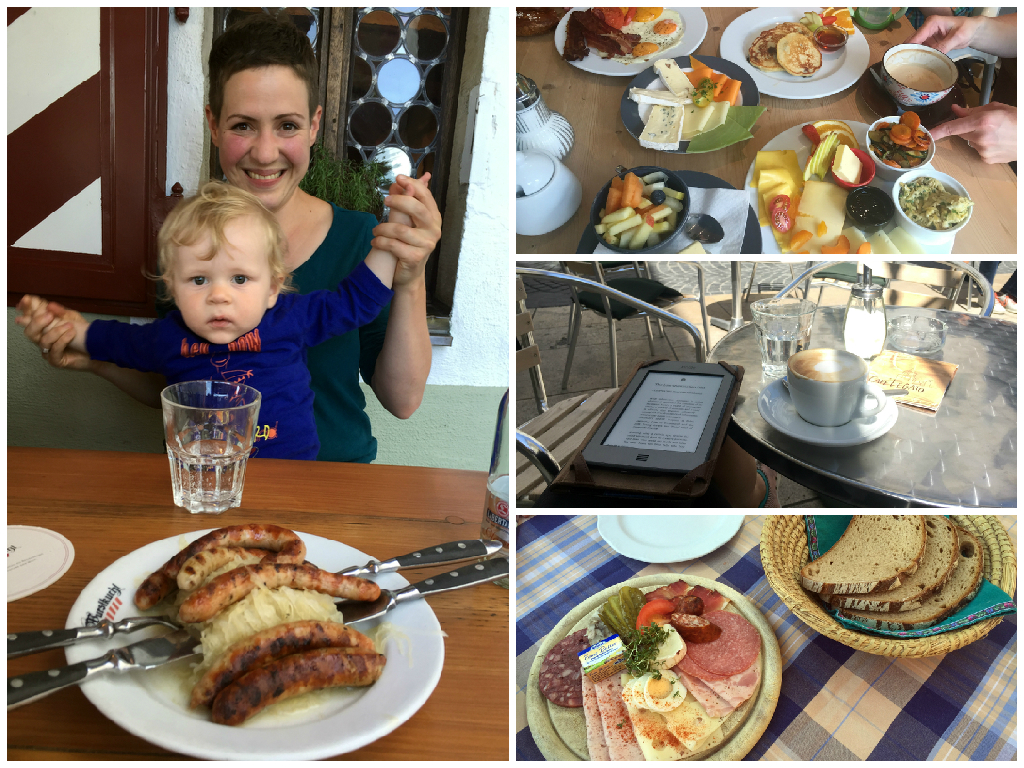 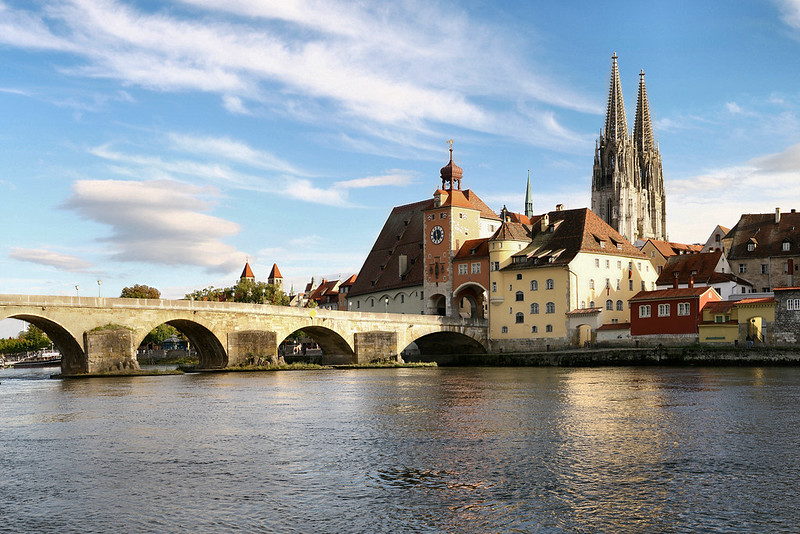 Other than a brief meeting in the Frankfurt airport on my stopover to Israel in 2009, it’s been 9 years since I saw Steffi. As always, we followed an unbroken thread of conversation through coffees, bike rides around the city, meals, and hikes. Other than fewer cigarettes and pimples and a lot less beer and wine—and the presence of a wide-eyed one-year-old—it was exactly the same. 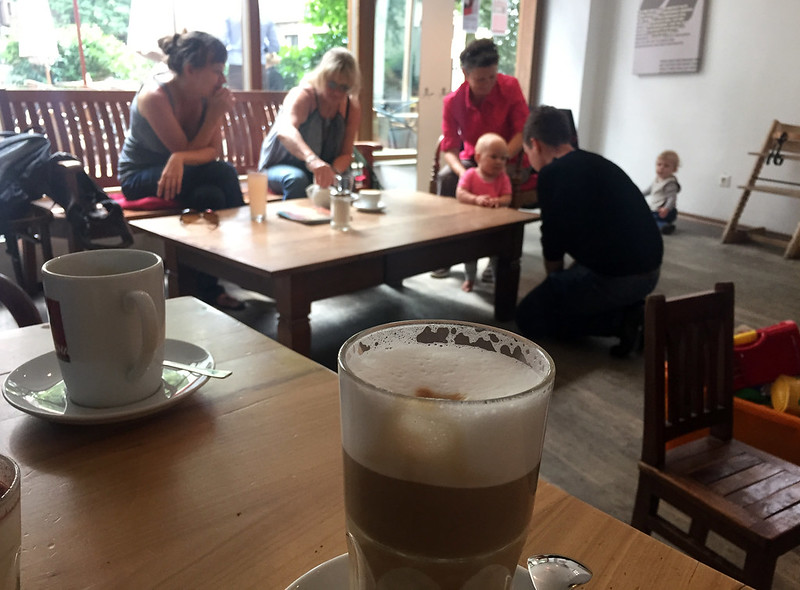 At the local daycare–er, I mean, cafe.

Training-wise, in Regensburg I enjoyed a hard, hot run through farm fields with Judith, a few solo easy runs, and a 12-mile run along the Danube river in a light rain. 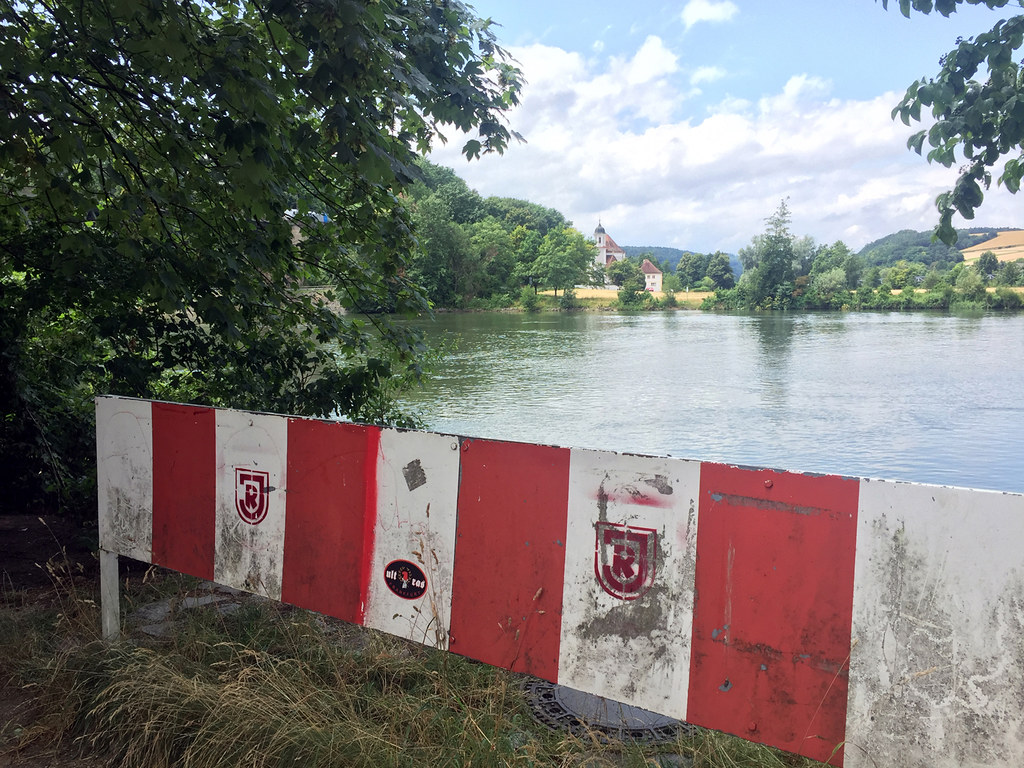 The turn-around spot on my long run.

We hiked, cycled around on a pair of old mountain bikes, and I swam in the city’s 50-meter pool twice. 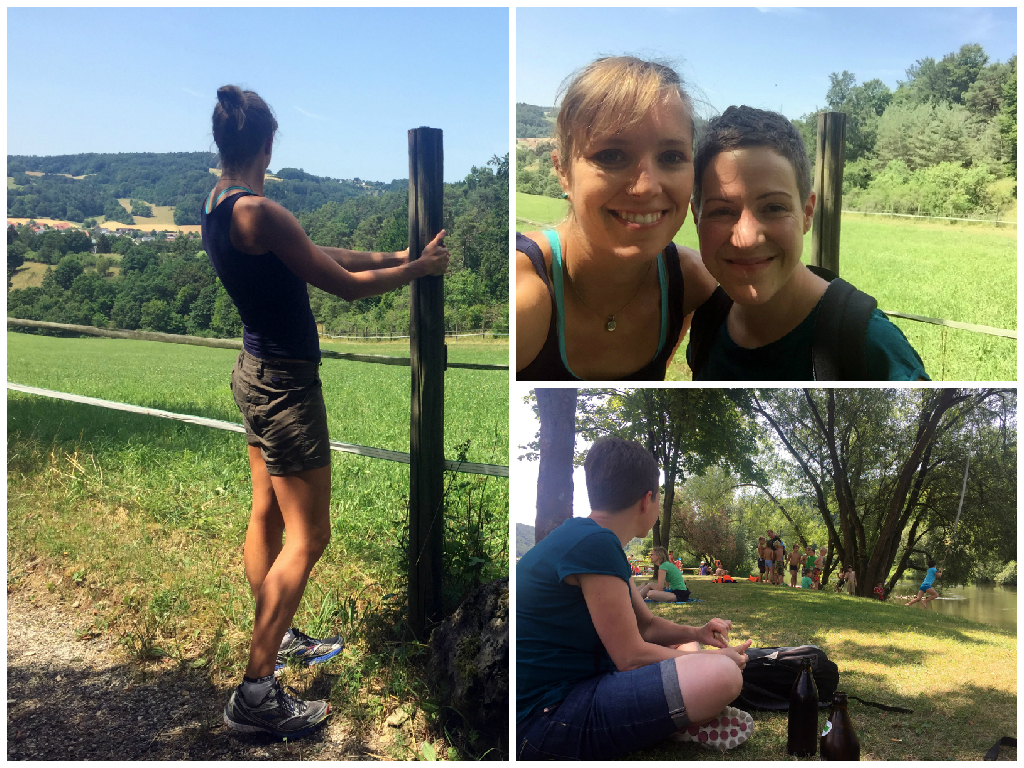 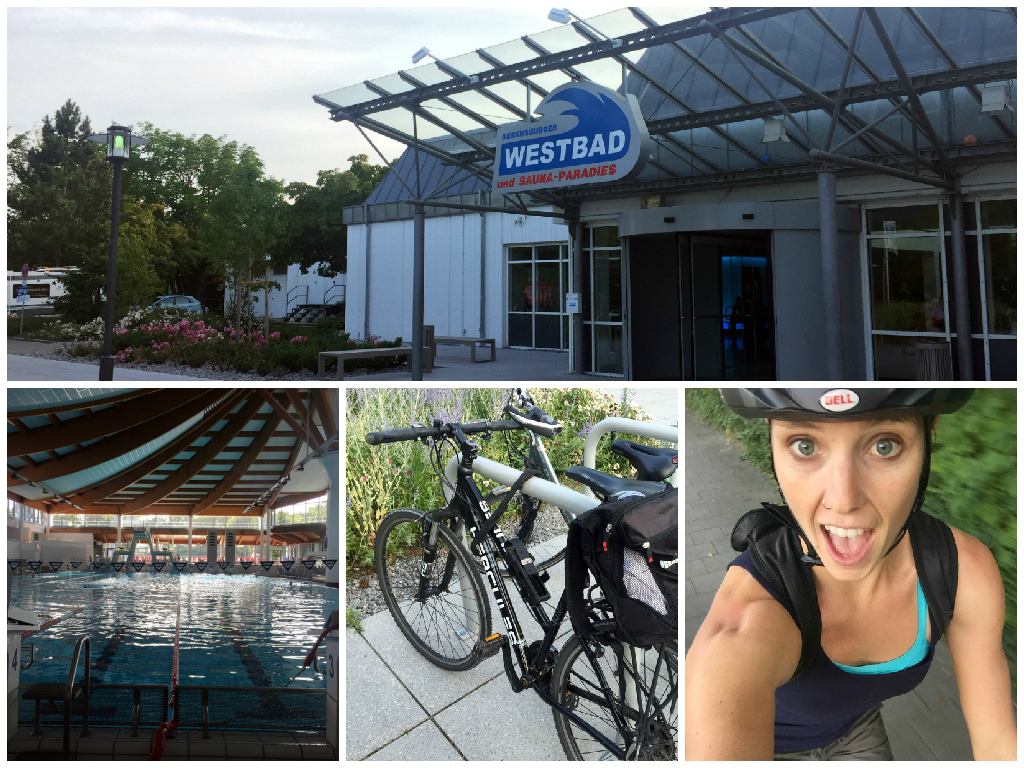 A sweet sunset swim and goofing around on the bike. 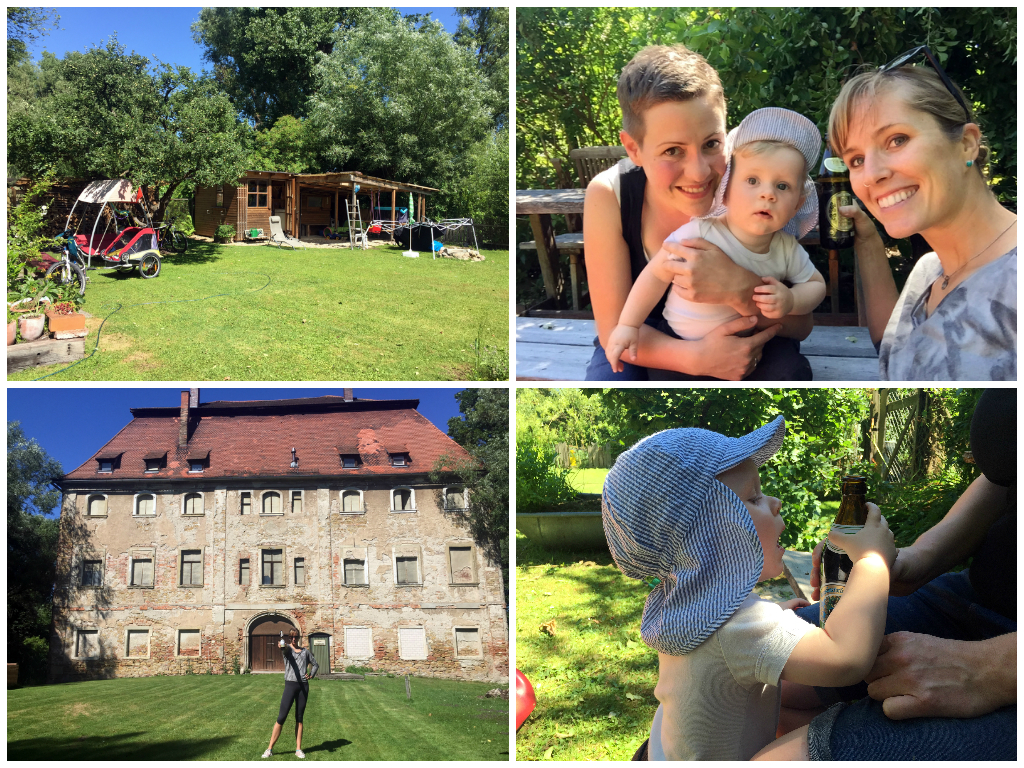 In Steffi’s awesome garden, an historical building on the site, and a man after my own heart.

Whatever it does, traveling throws life off its rails. And though it often takes me a day or so to get back in the groove, I’m grateful for the opportunity my job has provided me to get to see so much of this beautiful world. 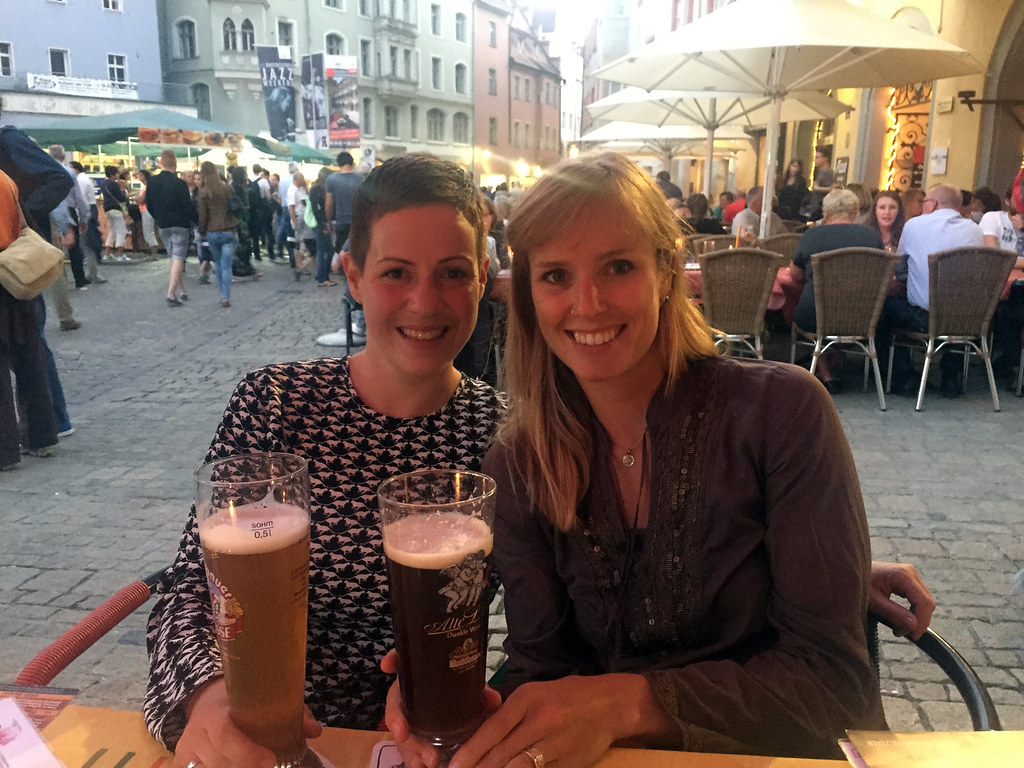 At the jazz fest–we don’t look a day older than when we first met, right?

With all my training obsessions aside, I’m going to miss this one. Here’s to seeing each other before another 9 years go by. You remind me of what matters most.

5 thoughts on “jet lag and gelato”