Last Thursday evening I piled into a truck with four friends and a 10-year-old and took off for Utah. We pulled into our Air B&B at 3 am, ready to race yet another one of these darned things — these strange and cruel tests of physical and mental fortitude and logistical havoc, all underscored by the promise of greatness.

Last week I wrote about how new things at work were affecting my pre-race focus (nada!) and overall energy (fire!). On the flip side of the finish line, I can report that I race better with a laser focus than I do when scattered like paper cups on a windy Ironman run course. 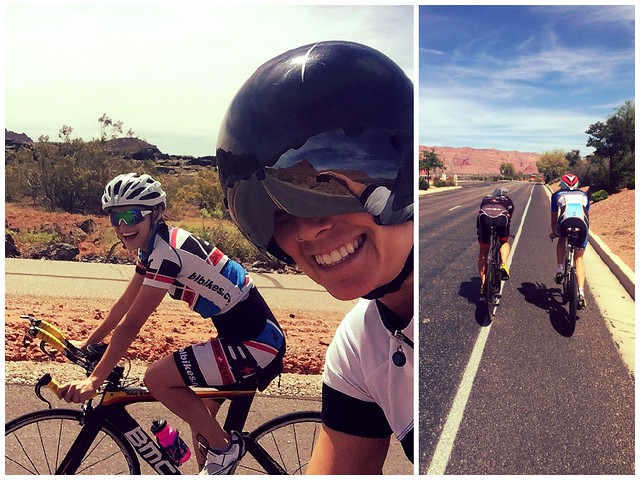 Pre-riding the course with the roomies. Man that helmet is huge!

I packed the day we left and didn’t forget anything crucial other than my course nutrition. No matter, I used the random sample quicdisc tablets in our packets and they worked fine, mixed with the usual standbys Nuun and Skratch. I visited a local bike shop to supplement the rest.

Friday was a logistical circus of trying to get five athletes shuttled around to their various meetings, packet pick-ups (x2, who forgets their gear bags??) and bike check in one vehicle, while factoring in important things like conference calls, naps and snacks. We all managed to reconvene at the house at 6:00 for dinner — a bit later than I like, which warranted pizza delivery instead of the usual grocery store run. At this point, some crappy pizza wasn’t going to make or break my day. We dined al fresco with the Blancos — the smell of their healthy homemade food overtaking our pizza — and were in bed by 8. 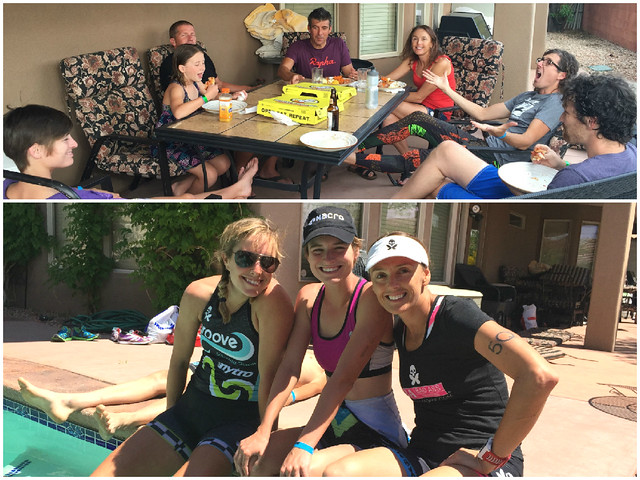 Pre- and post-race fun at our Air B&B. Lower: Payton came 2nd in her AG and Jordan had another great race too.

I felt surprisingly refreshed in the morning and ate my Oceanside “winner brekkie” of white rice, maple syrup, and coconut butter. (This time, however, I opted for the coffee!) Mark delivered us to the shuttles by 5 a.m. and we were on site by 5:30. My wave didn’t start until 7:51, so I took my time in transition before getting kicked out and setting up “Barnana camp” on the side of the road with Andrea and Stacey (below, in pink and blue tank tops, respectively), two of my favorite training partners in the Sergio days.

When the time came to race I lined up with my mind on everything but racing. 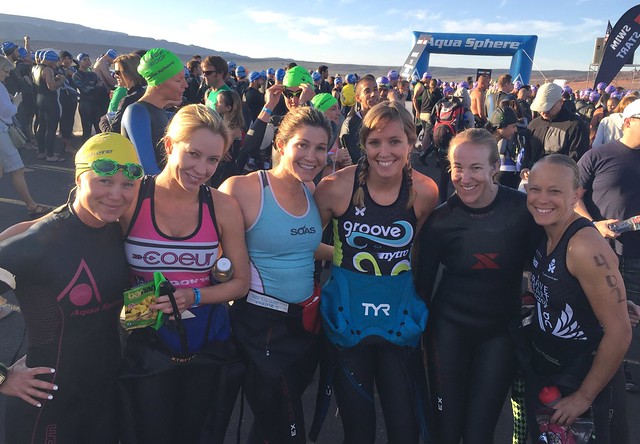 I learned on Saturday that for me, athletic performance rides in on the backs of focus and adrenaline — not wondering how my colleague is doing covering the pro race, or trying to figure out what the next few weeks of my life are going to look like. I’d been buzzing all week, but that buzz did not show up on race day as it could have, had I harnessed it better. I was happy to be out there (golly gee, Utah is pretty! and oh how great it is to be healthy!), but I was distracted and dissociated from the grit I needed to truly perform at my best.

As I swam I thought about conversations I needed to have, not about body position and rotation and a strong pull. But the water was clean and clear and I barely touched another human being. As I rode I watched my watts settle in comfortably just above 200, but then suddenly they’d dip too low on descents and flats as my mind drifted. I could’ve used a strong rider for that cat-and-mouse motivation that makes me ride well, but that person never came. I felt more positive starting out on the run than I have in my last two halfs, and energetic, too, but around the halfway point started to really struggle with the desire and will to push as hard as I knew I was capable of. In retrospect, this has been difficult to admit, as Gus* has provided a convenient scapegoat for my terrible triathlon running. 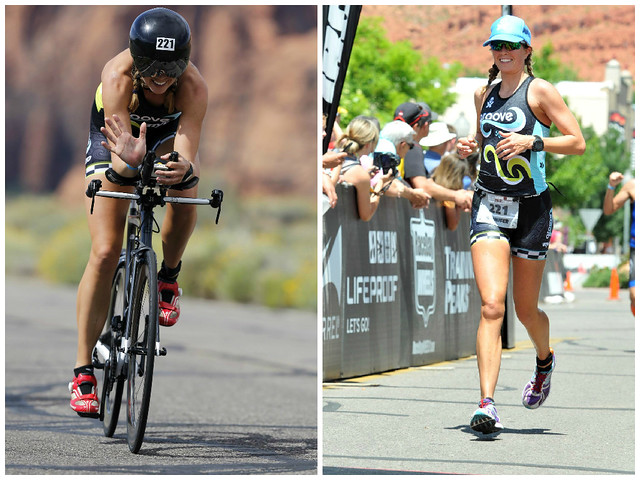 Obligatory Giro Selector bug-head shot, this time with a wave, and sporting my Groove kit and Betty Designs trucker hat.

We drove all day Sunday and then crashed with Game of Thrones and the huge growler of Stone beer we hadn’t touched all weekend. The post-race doldrums/questions/crash hit hard this week, for whatever reason: Monday was rough (DOUBLE BASTARD ALE), though I managed to get a 45-minute Masters swim in at lunch. Yesterday was only incrementally better — a tough yoga class and a two-hour easy ride were my drugs of choice. Today I’ve been at my computer for far too long and it’s time to go see what my legs think of running, leaving bigger decisions for when the fog finally lifts.

*Remarkably, Gus behaved himself more than usual, either due to the meds I’ve been on or the two GasX pills I tried taking late on the bike. The gurgles and pain both stayed at a minimum. This might have been due to not riding hard enough, as in Arizona when he stayed at a 5-6 out of 10, the meds, or a combination. Just more data for the experiment!