I haven’t posted a recipe in a while. This blog was born in food, and I seem to have forgotten my roots. Today I am setting that right by bringing you Yum Neua Yang, or Thai Charred Beef Salad. We served it to friends this past Saturday night, over cold beers and cooling soaks in our condo pool—as directed by their persistent 3-year-old son who implored: “Whole body in!”

With the unusually warm temperatures (for San Diego) as of late, it was just the right thing to serve. It’s also the perfect dish to take advantage of summer’s fresh herbs, is at once refreshingly cool yet gently warming with spice, and is impressive without requiring much skill, beyond being able to wield a mandolin. (For that I have built-in help.) 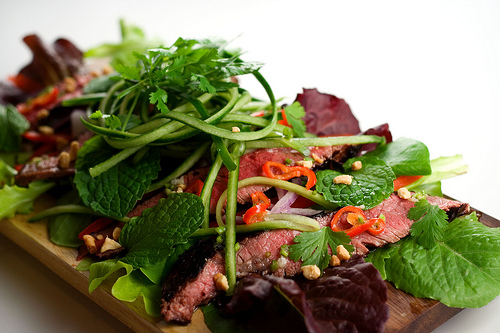 An approximation. I was too busy eating to photograph ours.

I was introduced to this salad by a particularly adventurous foodie friend, who’s made an appearance on this blog once before. He whipped it up in our Cardiff apartment one night and I begged for the recipe—which turned out to be just notes made from numerous visits to The King and I restaurant in Rochester, NY. He has since moved to my hometown (Winnipeg) and due to a dearth of Thai, makes it himself.

“The meat can be pretty much any hunk of beef muscle you like,” he begins. “Toughness is not really an issue since it’s sliced as thin as is feasible, across the grain (important for tenderness) and quickly charred in a hot pan, under the broiler, or on a grill after being marinated in sliced lemongrass, kaffir lime leaves, lime juice, fish sauce, and sliced hot peppers. Slices are plated and piled with whatever fresh greens strike your fancy along with some sliced purple cabbage, scallions, carrot, cucumber, mint, cilantro, and Thai basil. You can add more sliced peppers if you want it spicier. Then the whole lot is doused with a dressing of three parts lime juice, three parts fish sauce, and one part sugar. It can be jazzed up with more lemongrass, peppers, and kaffir lime leaves, if you wish.”

Because I’m nice and want you all to try it, I’ve turned his notes into a recipe. Learn to make it once and then make it often—especially on hot, humid summer nights after riding bikes with friends much stronger than you. Make sure good beer is in ample supply, and maybe throw in a goofy 3-year-old splashing around in a pool for good measure.

serves four but can be scaled up

1.5- 2 pounds lean beef, such as flank steak, sliced across the grain