Triathlon offers a different way of approaching weight and body image; it becomes just one more piece of the performance puzzle—like training, gear, and coaching choices. I’ve been trying to keep track this year of how I perform at different weights, though it’s hard because there are so many other variables.

As I embark on week two of regular training for my next race, it’s interesting to look back on the year so far—measured out not in J. Alfred Prufrock‘s coffee spoons, but in pounds of fat and muscle. I’ve been steadily gaining weight since my Ironman in March (140-142 lbs), managing to hang onto the upper end of that range for St. George in May, and then inching up to 145 by the beginning of June. By mid-July, I was still hovering around 146—where I stayed for Vineman 70.3. Last week I watched 148 morph into 149, and realized that I’m now 10 pounds heavier than I was at this time last year. Though I often joke/complain about it I actually feel surprisingly neutral towards it all. I like being lean, but I’m learning how my body craves—and benefits from—a little off-season pudge. This week, however, I’m back at work cultivating these habits, and will be back down to 140-ish in no time.

It was an opportune time to finally crack open Tina Fey’s Bossypants. I don’t know why I didn’t read it sooner. By turns offering stand-up comedy style memoir and friendly career advice, Fey weaves in pure comedic gems we can all relate to. Besides giving me my post title today, the below excerpt amused me greatly. I’ve added my version/response/confession, if applicable, in parenthesis. Thanks Tina, for the reminder. 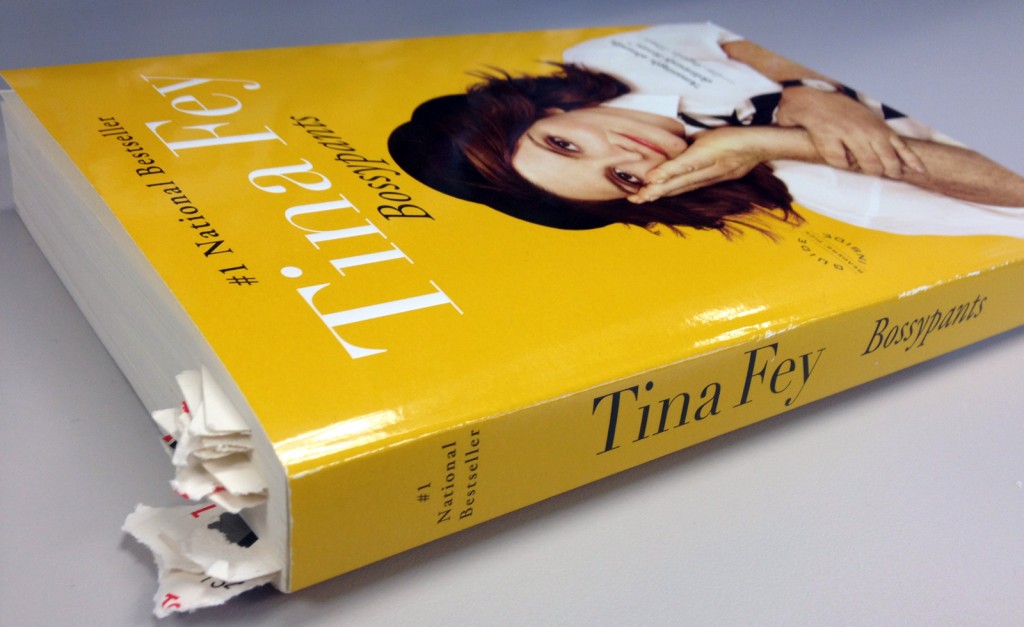 Excerpted from Bossypants, by Tina Fey:

Remembrances of Being Very Very Skinny

For a brief time at the turn of the century, I was very skinny. This is what I remember about that period.

-I was cold all the time (yes)
-I had a pair of size-four corduroy short shorts. That I wore. To work. In the middle of Manhattan. (I had a pair of size-four Target cut-offs. That I wore. To work. To our beachside offices in San Diego.)
-I loved it when people told me I was getting too thin. (Sadly, yes)
–I once took a bag of sliced red peppers to the beach as a snack
-I regularly ate health food cookies so disgusting that when I enthusiastically gave one to Rachel Dratch she drew a picture of a rabbit and broke the cookie into a trail of tiny pieces coming out of the rabbit’s butt.
-Men I had met before suddenly paid attention to me…and I hated them for it. (My husband fell in love with me and loves me no matter what…and I love him for it.)
-I had a lot of time on my hands because I wasn’t constantly eating. (I had no more time on my hands because I was constantly training.)
-I ran three miles a day on a treadmill six days a week. (I swam, biked, and ran for 18-20 hours a week.)
-I felt wonderfully superior to everyone. (Sadly, sometimes)
-I didn’t have a kid yet. (What she said.)

We should leave people alone about their weight. Being skinny for a while (provided you actually eat food and don’t take pills or smoke to get there) is a perfectly fine pastime. Everyone should try it once, like a super-short haircut or dating a white guy.

Remembrances of Being a Little Bit Fat

For a brief time at the end of that last century I was overweight. This is what I remember about that period.

-My boobs were bigger. (Probably. Don’t remember.)
-I once left a restaurant in the middle of dessert to get to Krispy Kreme before it closed. (I once went out for a decadent meal and then upon returning home, made popcorn.)
-Even though I only liked McDonald’s fries, I believed it was more nutritious to make a meal of it and have two cheeseburgers as well. (Like all good So-Cal transplants, the only fast food I eat is In-n-Out and the only thing I eat at McDonald’s are egg McMuffins.)
-If I was really ambitious I would get a Whopper Jr. at Burger King and then walk to McDonald’s to get the fries. The shake could be from anywhere. (I knew I’d become a coffee snob when before going out to breakfast with a friend I’d get my morning coffee from somewhere else beforehand.)
-I could not run a mile. (I could not run a mile in under 10 minutes.)
-I wore oversize men’s overalls that I loved.
-Guys who were friends with me did not want to date me … and I hated them for it.
-On at least three occasions, I vomited on Christmas Eve form mixing chocolate, peel-and-eat shrimp, summer sausage, and cheese. No alcohol was involved.

We should leave people alone about their their weight. Being chubby for a while (provided you don’t give yourself diabetes) is a natural phase of life and nothing to be ashamed of. Like puberty or slowly turning into a Republican.

3 thoughts on “remembrances of being a little bit fat”