As I learned in the red hills of Utah last Saturday, Ironman fitness might go stale after seven weeks, but it doesn’t go bad. The seven weeks between jumping in the Gulf of California at Ironman Cabo on March 17th and the frigid waters of Sand Hollow Reservoir at the St. George half-Ironman last Saturday disappeared in a blur of moving, work, bike racing, and—as I called it in my last post—sorta-kinda-not-really caring about my training or diet. I might have gone a few minutes faster with more diligence, but the fact that I PR’d by five minutes? Bonus. Money in the bank.

Here’s a sample of what pro athletes had to say about the difficulty of the new course:

Debuting as a half-Ironman race, the day started with a pristine swim. I tried out new Aquasphere Kayenne’s and loved them: Comfy, didn’t leak a drop, and just tinted enough to dim the early-morning sun. I swam a leisurely 38 minutes flat in my new Zoot Prophet—annoying but understandable given my lack of aquatic antics as of late. Classic pre-race shot with the Bethster.

After pow-wowing with my road trip mates (over burritos from a hole-in-the-wall called Los Hermanos—Breaking Bad anyone?!?), I decided to hammer the bike and just see what I had left for the run. At last in a way I had never done in a race before. The bike course, which reminded me of a water slide at West Edmonton Mall called “Nessie’s Revenge,” was distractingly gorgeous and not as hard as I’d feared. This was largely thanks to the benevolent Utah weather gods, who delivered cool temperatures and low winds—penance for their angry 2012 tirade? I rode a 2:39:46, good for the sixth-fastest bike split in my age group (meh) but given my lack of specific bike workouts, fine by me. As for my plan to “go hard?” Well, after the race I cozied up in the TrainingPeaks booth and got a mini tutorial on how to interpret more advanced data from the software I’ve been using to store my data since 2007. I learned that my normalized power was 210, which equals out to 3.02 watts per kilogram (in the pro women range). I’m not really a data geek, but sometimes it’s fun.

I wore a heart rate monitor for the first time in a race (weird, I know) and learned a few things there as well: On the bike, my average heart rate was 135, and maxed out at 157. According to my more experienced trip companions, I could probably be working a little harder in the saddle. Duly noted. 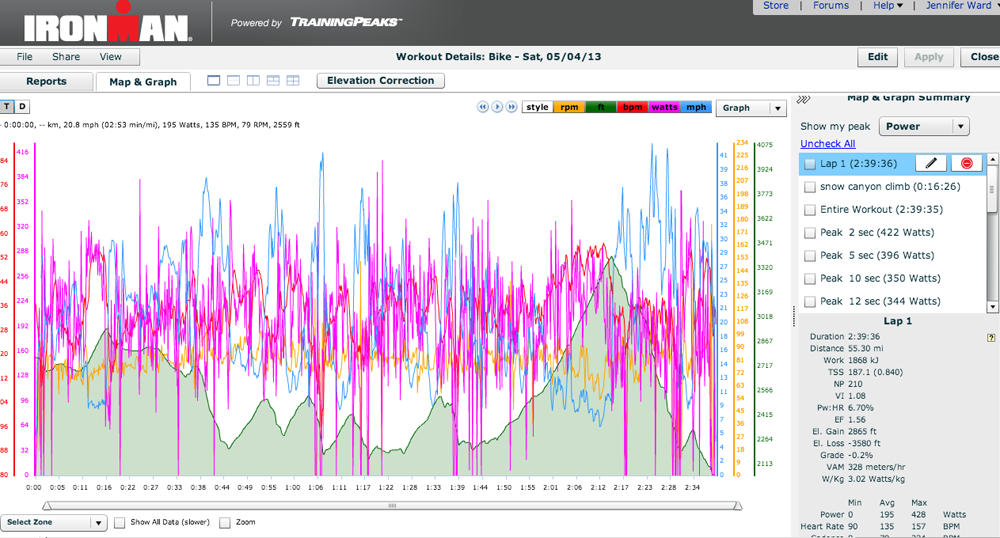 The run course is relentlessly hilly, and after a tough bike course, seems even more like punishment. The course overlooks the vast Southwestern landscape however, rewarding runners with vistas to distract them.

The first two miles are slightly uphill, and I strangely, I felt my first wave of wanting to drop out of race. It wasn’t because I was sore, or particularly tired, I just felt apathetic. Maybe it was being too low on calories, I’m not sure, but I actually entertained the notion of dropping out and joining Mark on the sidelines with an iced coffee to cheer for my friends. Then, miles 3 and 4 rolled by in a state of near-enjoyment, and I told myself to just finish what I started. Miles 5 and 6 were close enough to halfway to keep me going, and the rest, well, I was just too close to quit. The last two downhill miles into the finish rewarded my efforts with that feel-good feeling only racing can bring, and I was glad I stuck with it. I ran a 1:57:27, with an average heart rate of 160. With my Nytro Women teammate Lauren at the finish. The medals have Kokopellis on them! Hippie approved.

There were lots of training partners, friends, and industry buddies to chat with at the finish, and a truck handing out free ice cream sandwiches. I got my data analyzed, and hung out in the shade for awhile until going to rescue my two faster friends from under a shady tree. Our race sherpa Mark shuttled us back to the condo where we cleaned up, relaxed, and then went out to celebrate (number one of two) Cinco de Mayo and Keith’s imminent graduation from the amateur ranks. (Ever been to a triathlon bar mitzvah? I have.) St. George delivered everything I wanted in a so-called “B” race and more: Fun times with friends, a huge boost of confidence and fitness, a gorgeous and challenging course, and an affordable weekend getaway. I’m proud of my new PR (5:21:03), but it’s the memories that will bring me back here, not the numbers.

Number crunching of a different kind:

The title of this post comes from U2 song, “In God’s Country,” which I can’t help but hear in my mind whenever I’m in Utah: “Desert sky / Dream beneath a desert sky / The rivers run but soon run dry / We need new dreams tonight …

One thought on “racing in god’s country”