I used to read food blogs on a daily basis, and subscribe to (and yes, read) Cook’s Illustrated. I even made their chicken once. Baking and cooking used to play a much more central role in my life. I even started this wacky thing called a food blog.

All that was before getting a grown-up job (sort of ) and moving to California, where my secondary hobby, triathlon, staged an uprising and usurped Suzie Homemaker. These days, we do consume more meals out, but we also make far more simple meals that don’t require recipes. Because of that, and spending far more time in front of a computer screen than when I started out, this blog has quieted down significantly. But thanks to the recent encouragement of some fell0w fitness-minded friends (you know who you are), I’ve decided that I’m not ready to let it die just yet.

(And, for someone who used to be an obsessive journal keeper, this blog also serves as an interesting record of my no-longer-journal-obsessed life. The other night Mark and I were trying to figure out when we’d become friends with a certain couple, and what did I do? I checked the blog. There they were! “…a tempting invitation from friends to come over and eat chocolate cake all afternoon kept me away.”)

Anyway, onto the food.

Now that I’m finished my main races of the year (Oceanside and Orangeman) and triathlon training has taken a backseat to yoga and TRX and a new run focus, we’ve started cooking more. There’s been lentil soup and butternut squash soup and pumpkin muffins and muesli (most made without consulting a recipe). I’m focused less on perfection, and more on the creative act of throwing things together. Just the other day I said to Mark, “we have to keep cooking like this when I’m training for Ironman in the spring!” One can dream. 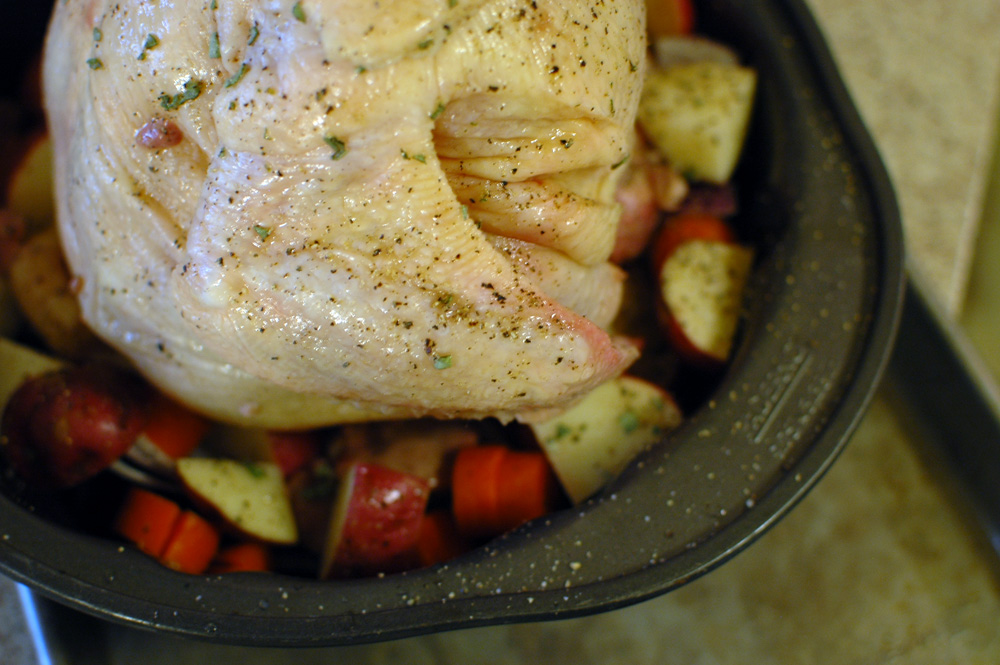 And, thanks to Anthony Bourdain’s fun techniques episode of “No Reservations,” we’ve rediscovered roast chicken. My response to a good, simple roast chicken, is always “why don’t we make this more often?” Seriously. It makes the house smell like a holiday and makes me crave pumpkin pie or some other delicious dessert my mother makes that’s no longer part of my life.

I want to offer you two ridiculously easy methods of roasting a bird. Neither of them require a special pan. Neither of them require trussing (though you can if you want to). Neither of them require anything but a 3-4 pound roasting chicken (go organic for the best texture and flavor), some salt, pepper, and that spice simply made for chicken: thyme. Dried or fresh, no matter. The first is for those of you who own a Bundt pan and wondered what else you could possible do with it besides make ridiculously delicious cinnamon coffee cake. The second is for those of you who own a cast-iron pan, or other oven-safe skillet. Both are equally simple and yield a tender bird with temptingly crispy skin.

So wherever you are on the food preparation spectrum, from microwaving Trader Joe’s meals to becoming the next Thomas Keller, these two methods will restore your confidence. They did mine. 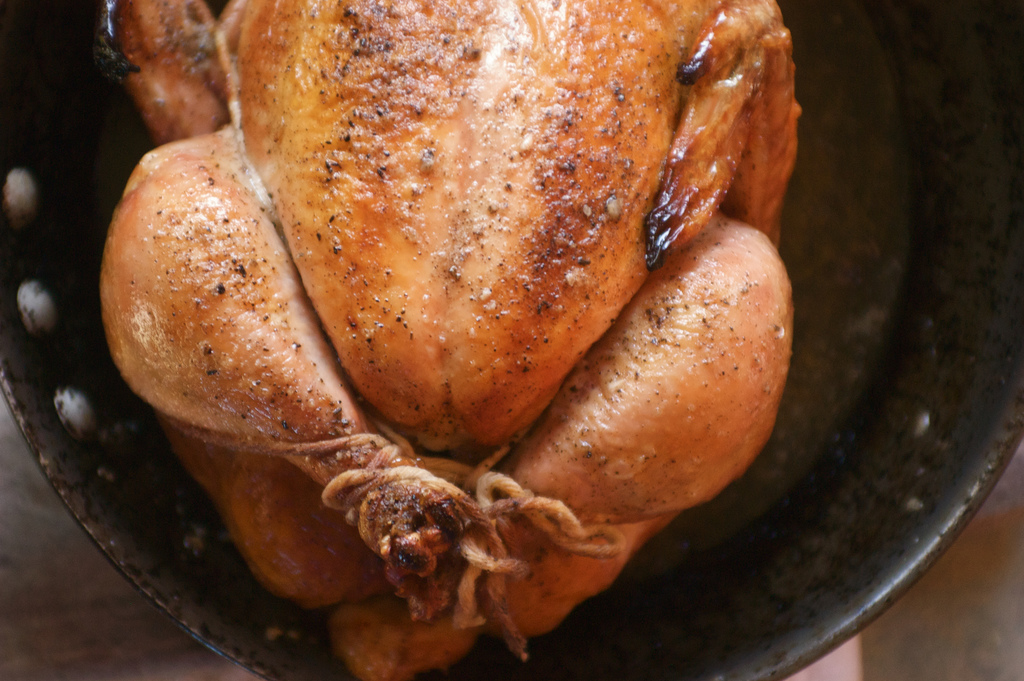 I discovered this method via Bon Appetit magazine, and then rediscovered it on the Kitchn, where it’s a much more entertaining read, titled “The Naughty Way to Roast a Chicken.”

1. Rinse and dry the chicken thoroughly with paper towels. Bring the chicken to room temperature (1 ½ to 2 hours). Preheat the oven to 450°F.

2. Rub the salt, pepper, and thyme into the skin. Apply the salt from above the bird so it falls all over in a nice even layer. Place an oven rack low enough to accommodate the Bundt pan, plus an extra few inches.

3. Scatter a layer of propping vegetables on the bottom of the pan. Turn the chicken upright (legs on the bottom, wings on the top) and plunge the body onto the pan’s central spike. Place the Bundt pan on a baking sheet to catch any grease that might drip from the inside of the bird.

4. Roast for 15 minutes, then turn the oven down to 350°F and roast another 40-45 minutes, or until an instant-read meat thermometer inserted into the breast registers 155°F. Turn the oven back up to 450°F and roast another five minutes, or until thermometer registers 160°F. (This is what the original recipe recommends, but after trying the below recipe, which keeps the oven at 450°F for the duration of the roasting, it seems to work beautifully and not dry out the meat at all.)

5. Carefully lift the chicken off with tongs. Set it on its back to rest on a plate. Check the roasted vegetables for done-ness. They should be tender but not mushy. If under-cooked, return them in the pan to the oven until done.

1. Preheat the oven to 450°F. Rinse the chicken, then dry it very well with paper towels, inside and out. Salt and pepper the cavity, then truss the bird (click here to watch a video of Thomas Keller trussing a chicken.)

2. Salt the chicken with about 1 tbsp of salt. I like to rain the salt over the bird so it has a nice, uniform coating that will result in a crisp, salty, flavorful skin. When it’s cooked, you should still be able to make out the salt baked onto the crisp skin. Season to taste with pepper. (We added the thyme here too; in this version, Keller has you add it after the bird is cooked.)

3. Place the vegetables in a saute or cast-iron pan and place the trussed chicken on top. When the oven is up to temperature, put the chicken in the oven. Don’t baste it or add butter. Roast for about 45 to 50 minutes, until the juices run clear. Remove it from the oven and add the thyme, if desired, to the pan. Let the chicken rest for 10-15 minutes on a cutting board.

4. Remove the twine. Separate the middle wing joint and eat that immediately. Remove the legs and thighs. I like to take off the backbone and eat one of the oyster, the two succulent morsels of meat embedded there, and give the other to the person I’m cooking with. But I take the chicken butt for myself. I could never understand why my brothers always fought over that triangular tip until one day I got the crispy, juicy fat myself. These are the cook’s reward.

5. Cut the breast down the middle and serve it on the bone, with one wing joint still attached to each half. The preparation is not meant to be super elegant. Slather the meat with fresh butter. You’ll start using a knife and fork, but you’ll finish with your fingers because it’s so good.