“Whirlwind.” “Roller coaster.” “Bittersweet.” None of the moving clichés are right. Each time, packing feels like something vaguely familiar—something I should be good at by now but for some reason am not.

For all the times I’ve moved, I really should be a pro: At 20, loading up two decades into a U-Haul in my parents’ driveway; at 23 to the apartment where I’d live alone for the first—and only—time; at 24 to a mountain lodge and back; at 25 from a ex-boyfriend’s house to a friend’s sunroom and then to Vancouver; at 26 to Upstate New York with my new husband; at 29 to D.C. for yet another solo jaunt. 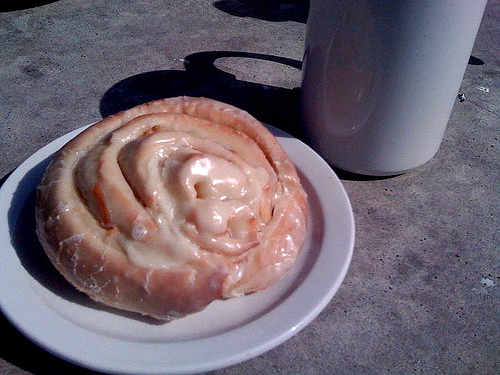 That pile of boxes—life squirreled away in cardboard—brings as many puffs of nostalgia as it does dust. Piles of papers and coins, clothes to give away, friends to see—so many lasts. It’s not fun being so well-versed in goodbyes.

Not that I’m unhappy: As many of you know, I’ve just landed what I can fairly call a dream job at a triathlon magazine in San Diego. It all happened so fast: an email, a telephone call, and a fly-out interview. Back in D.C. I wrapped things up, re-connected with my similarly jet-setting husband, and packed the Jetta for Syracuse.

How does one keep a food blog at a time like this? Not well, I’m afraid. But bear with me: Southern Californian delicacies are on the menu for the next season of this blog.

For now then, the story of how one food-loving wanderer eats her way west.

While in San Diego for my interview, the coast established itself as a mecca of bee pollen/hippie cuisine, flirt-worthy sushi, and orange-zest sticky buns on the ocean (pictured above).

Back in D.C., I had to choose a place for my “last supper” in the city that had been so good to me (bike accident battle scars aside!) I thought back fondly on all the cupcakes, ethnic morsels, and new experiences (like brewing beer for the first time) D.C. had offered. Indeed, it was more than just a six-month stopover between Syracuse’s ports and San Diego’s harbor: it was a satisfying sojourn in and of itself.

I settled on Café St. Ex in the U Street neighborhood, for their cute street patio and the great food I’d had at their sister business, Bar Pilar. Our meal of mussels, salad, and a Fried Green Tomato B.L.T. was summery and simple, a good memory to part on. In the very near future, I’ll be experimenting with how to incorporate cocoa into my balsamic vinaigrette.

And their sweet potato fries with just a touch of sweet-salty cinnamon? For those I might be willing to endure a humid D.C. summer. Although I’m sure the West Coast will have a suitable contender. 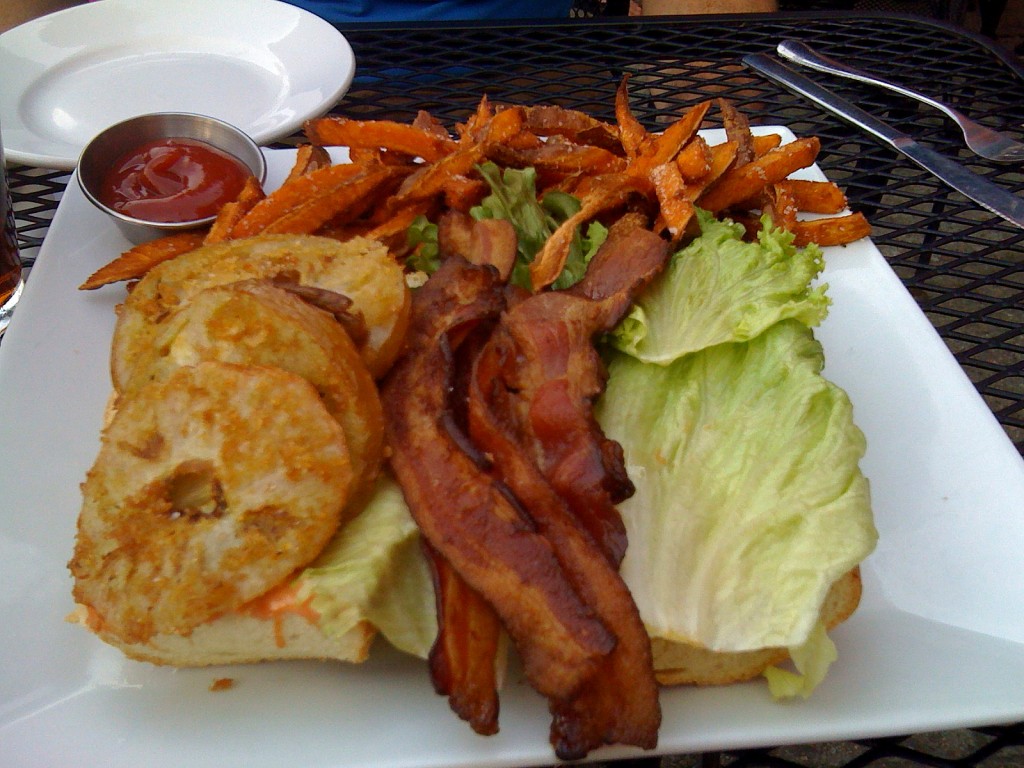 Back in Syracuse, eating quickly became a mindless task in a long list of to-do’s. Canned baked beans and back-0f-the-freezer discoveries were supplemented with the summer’s first corn (decent, though no sweet ears of late July) and the generous grills of good friends. I think beer might have supplied a higher percentage of my daily calories than is advisable, but my triathlon friends (not to mention all those boxes) helped me keep the negative effects to a minimum.

We set sail yesterday for our cross-country adventure, flung back into the arms of McDonald’s (recommended for their free wireless only), Starbucks (for the only suitable road coffee), Chipotle (yum), and friends along the way (rhubarb ice cream—thanks, Kristen!) After tonight’s quick stopover in Springfield for our dear friends’ wedding, we’ll join up with old Route 66, John Steinbeck’s “Mother Road,” and be on our way to the Texas panhandle.

4 thoughts on “eating my way west, part I”