According to the right-wing news media, a person’s taste says a lot about them — including whether they would make a suitable US president. Last week, as if grasping for things to criticize the Democratic candidate for, another political pundit called attention to Obama’s noshing habits. His crime this time around was his supposed penchant for arugula.

Those little leaves say communist all over them, don’t they? 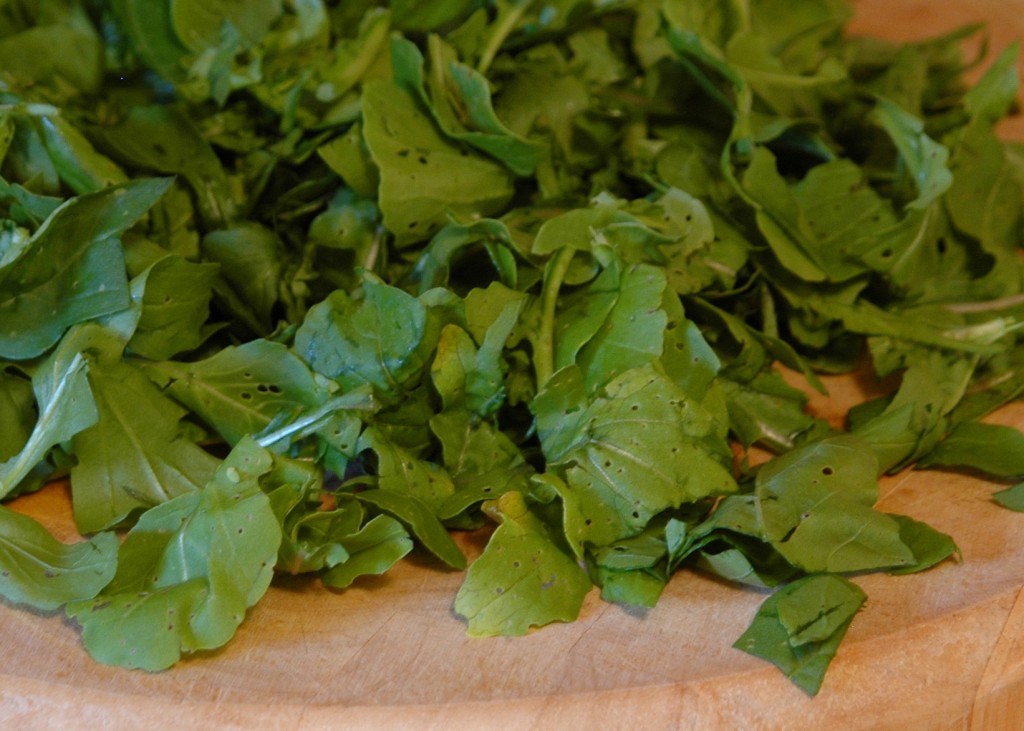 This came to my knowledge (as do so many other insipid media blunders) via John Stewart, whose show included a clip of ABC’s Jake Trapper calling Obama “an arrogant, arugula-eating, fancy berry tea drinking celebrity.” Now if that’s not reason enough to vote for a man who shares a last name with a brand of frozen french fries, I don’t know what is. Oops, now I’m just playing their game. Ahem, back to tonight’s pizza.

I know I just blogged about arugula, but this is totally different. I promise. 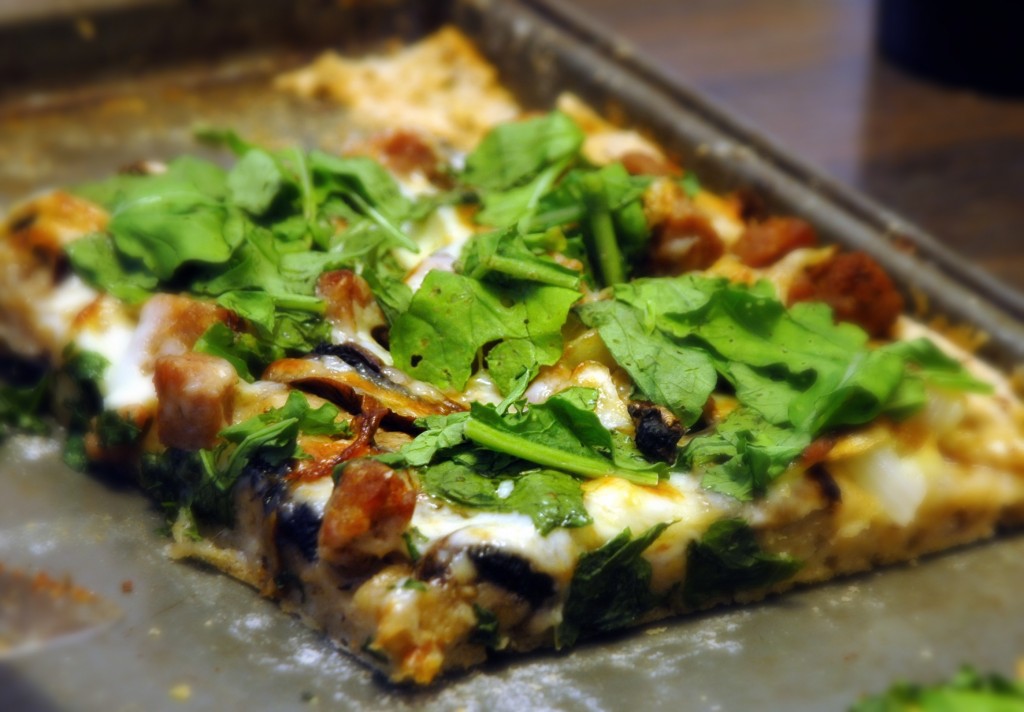 So I still have that abundance of arugula on hand, bored through with tiny bug holes that don’t bother me one bit when washed vigorously.

I’ve been wanting to try an arugula pizza, after seeing it pop up on blogs and in foodie magazines as of late: Arugula-fig. Arugula-prosciutto. Arugula-walnut. Characters like these haunted my dreams.

After a few minutes of research I discovered that handfuls of the rinsed and chopped weed (’cause it sure grows like one!) can be thrown onto any old fresh-from-the-oven pizza. The residual heat from the pie will wilt the greens and two minutes later your pepperoni and mushroom expectations will be blown away. Just like Obama will explode your iceberg lettuce and bacon expectations, America! If you only let him, maybe he’ll get Eleanor Roosevelt’s veggies growing again on the White House lawn.

Arugula might just be the tastiest leaf you could throw at a pizza pie, next to basil. 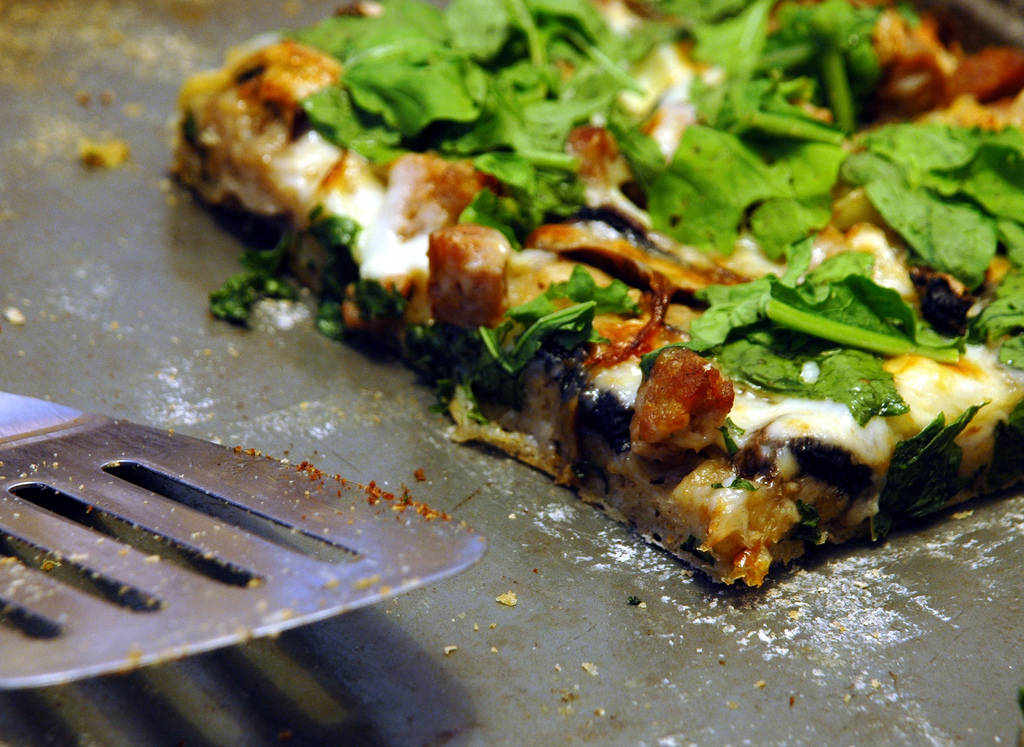 So not only did I eat arugula for dinner, I also went golfing this afternoon with my hubby. Now that’s a yuppie afternoon if there ever was one. I wonder what the FOX and ABC anchors would say about poor Obama if he were to engage in such an elitist, liberal, yuppie afternoon as I had. We can only speculate, and try to protect him by eating all the world’s arugula ourselves. Yes, that’s definitely the only solution for our poor Barack.

To fuel all your energy-draining worrying about our dear Democratic presidential nominee, I want you to go make this pizza. Consider it my gift to all you Americans with tension building in your souls for the future of your country’s leadership. I bring you Barack Obama pizza: some nutty, zesty, liberal, well-educated, eloquent, DIY grassroots hippie flatbread with flax in the dough to boot.

Take that McCain Spicy Fries and Deep n’ Delicious. You’ve got nothing on this one.

No Knead, No Fuss Pizza Dough

Adapted from Jim Lahey’s Sullivan Street Bakery (via about a billion food blogs) this recipe yielded, on our rectangle cookie sheet, a half-inch thick crust with a nice crisp sheen and satisfying chew

In a large bowl combine flour, yeast, salt and olive oil. Add the water and stir until blended; dough will be shaggy and sticky. Cover bowl with plastic wrap and let the dough rest 12-18 hours at warm room temperature. THAT’S IT! NO KNEADING! Dough is ready when its surface is dotted with bubbles. Using oiled hands, pour the dough onto a well oiled and lightly floured pizza pan. Cover with the plastic wrap while you pre-heat the oven to 425 and prepare the rest of the toppings.