We landed early in San Jose, Costa Rica, planning to drive north to the coastal surf town of Nosara. The drive was supposed to take about four hours. We had all day.

After a few hours and a missed turn, the highway gave way to backroads riddled with gouges that redefined the diminutive, almost cute term, “pothole.” James and I have a thing for renting cars too small for us, and grossly unfit for the feats we ask of them. And so, we clenched our teeth, with little Felix in slow tow, as we maneuvered our red tin can through one creek crossing after another.

Four hours turned into eight and finally, we arrived—sweaty, hungry, and very, very tired. (We later learned that most people fly into Liberia Airport, not San Jose, and drive to Nosara from the north on paved highways. Oops.) 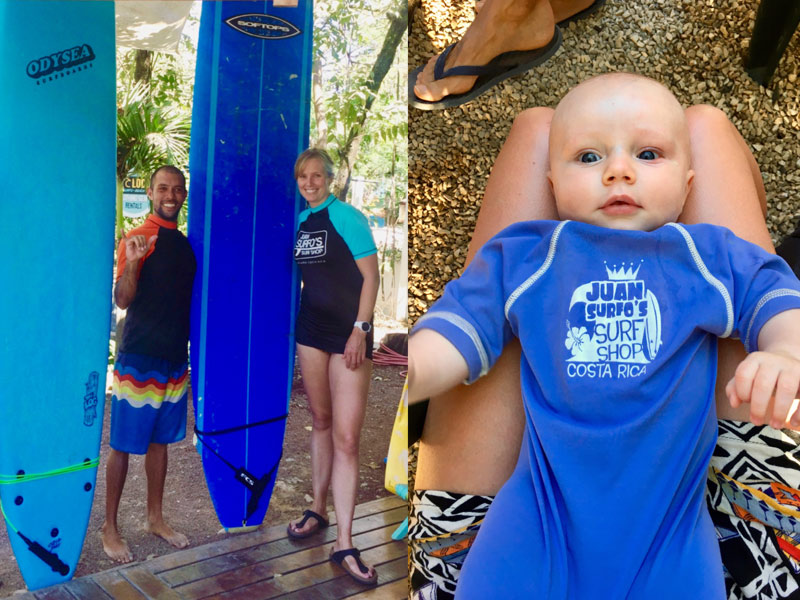 We checked into our hotel and staggered into a pub that served gourmet burgers and played surf videos on the tv screens. It was so packed with families it might as well have been a McDonalds, the adults sipping IPAs and the kids gumming fries, their mops of hair wild from hours in the salt and sun.

In the morning it was time for me to get on a surfboard. It had been almost a decade. Down on the beach, our instructor Ricardo traced the outline of a board on the sand and had us practice pop-ups. According to my fellow students, I was killing the pop-ups. 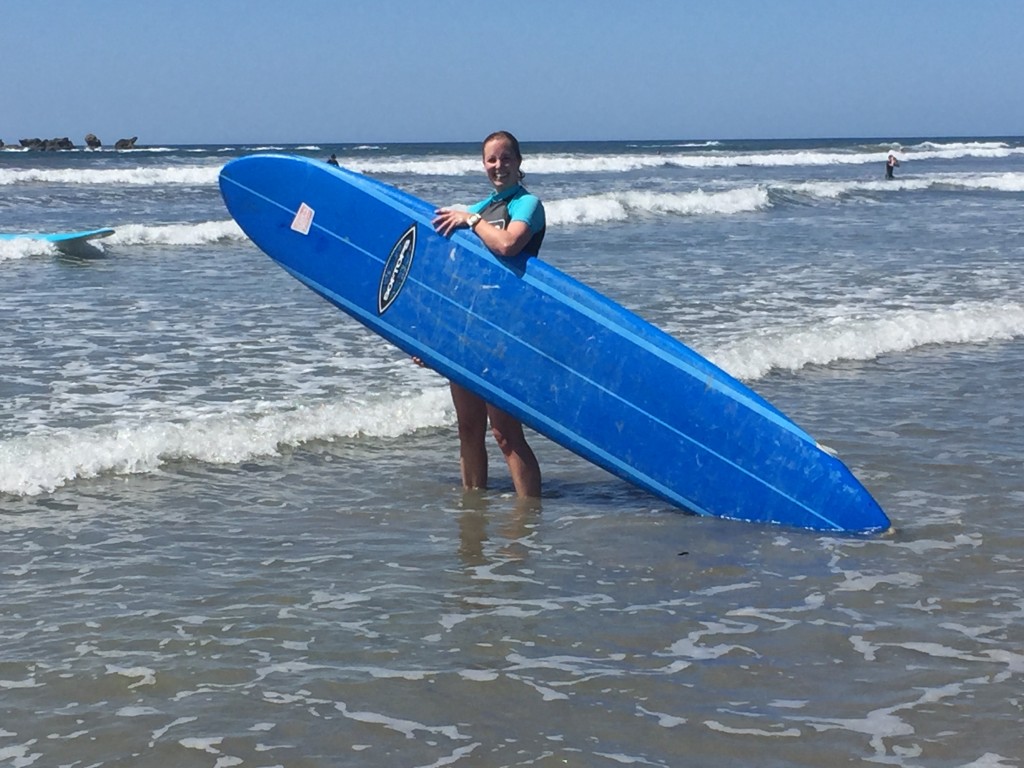 I have lived near surf. I have duck-dived under my share of waves. I am comfortable in the open water. But surfing was different; it is a far bolder act trying to harness rather than skirt one of nature’s most powerful forces. It is a dance with defeat. You haul your board out to sea only to be smacked down by wave after relentless wave. The ocean is a tiger and you are a mouse in its clutches. Even the most incremental progress is undone immediately, as you’re dragged back to shore on a wave you weren’t positioned to catch. It’s a rhythm of timing, strength, and stamina; I will never again think it looks easy. 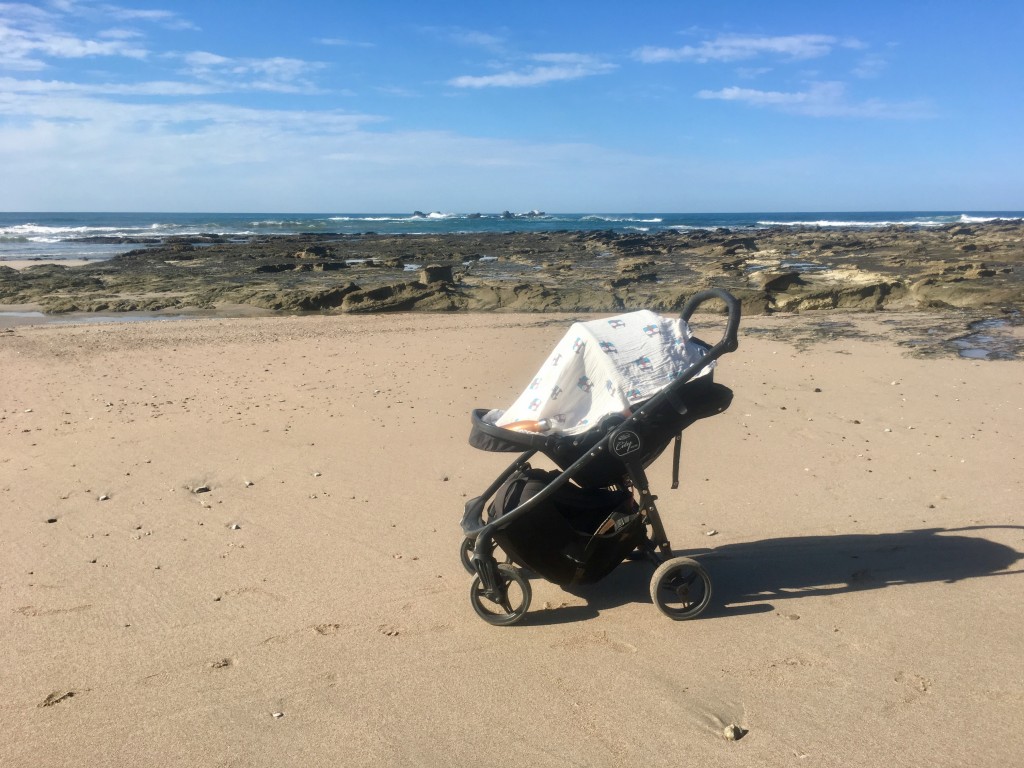 Thanks to my huge, buoyant board and Playa Guiones’ beginner-friendly surf, I was able to stand up more than a handful of times. I was proud of myself, actually, smiling as I imitated the “surfer stance” and James snapped pictures from the beach, Felix sleeping in his stroller, slathered with sunscreen and covered with a blanket.

The next day, I tried a lighter, smaller board—a step I definitely wasn’t ready for. This time, I got frustrated. The board refused to have me, yielding instead to the superior force of water underneath it and rocketing out from under me again and again. My head pounded and my ribs ached. I lasted an hour, max, each session, before dragging my tired body back to the beach, where baby sea turtles no bigger than silver dollars marched toward the ocean, more fearless than I was at a hundred times their size. 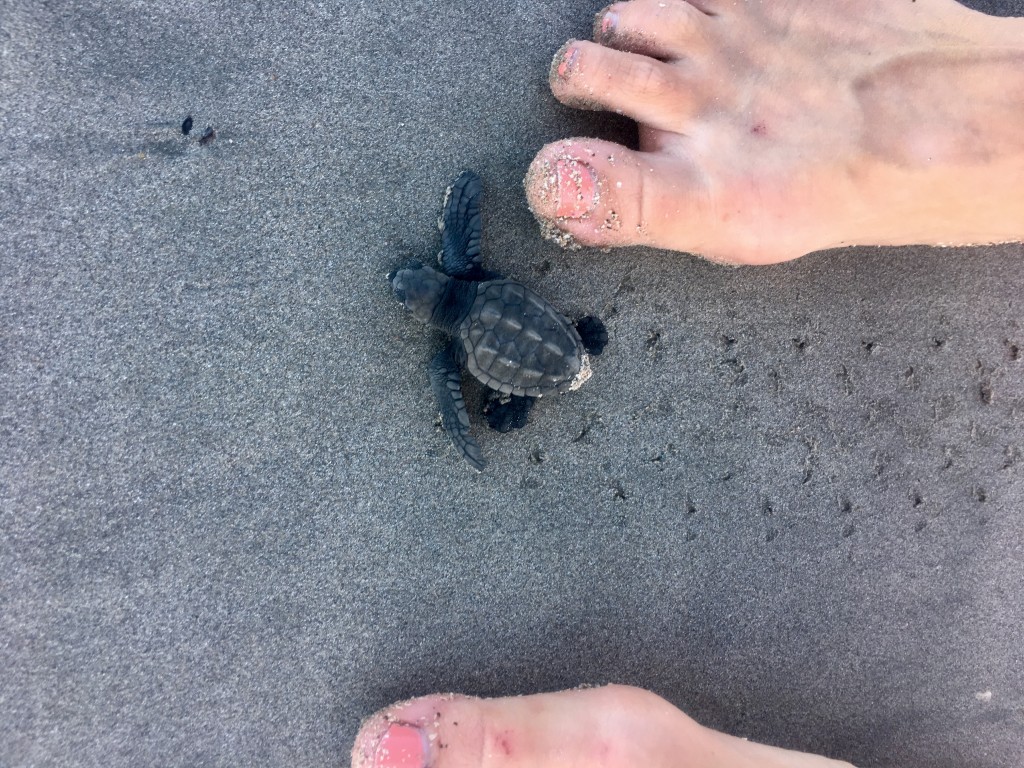 We wish we’d stayed in Nosara longer, but on the fifth day, sticking to the plan, we packed up the red tin can for Coco Beach, to the north.

I knew I’d try diving at some point in my life. (One of those “somedays” we all perhaps foolishly assume.) James insisted that someday was now, and treated me to my first Discover Diving course with a local company. I took my introductory lesson in a hotel pool barely bigger than a hot tub. My instructor was a Californian about my age, and quick to laugh. I liked her immediately.

Dive day arrived and I joined two other rookies in that back of a pick-up truck, packed like cargo with rows of oxygen tanks. We might as well have been prepared for a trip to outer space. Once we reached the beach, we loaded our gear into a small boat and set out under the already menacing morning sun.

Once we’d reached our dive site, the instructors and boat captain switched into autopilot, setting anchors and doling out equipment. I pulled on my wetsuit—stiff and dry, unlike the supple swimming wetsuits I was used to. I tied my hair back and snapped on the cartoonish orange mask. Then I buckled my BCD around my waist, loaded with its heavy tank, and stood, feeling its weight and imagining myself sinking to the bottom in an instant. The tanks hissed and popped as the instructors turned gauges and valves. I was in their hands. 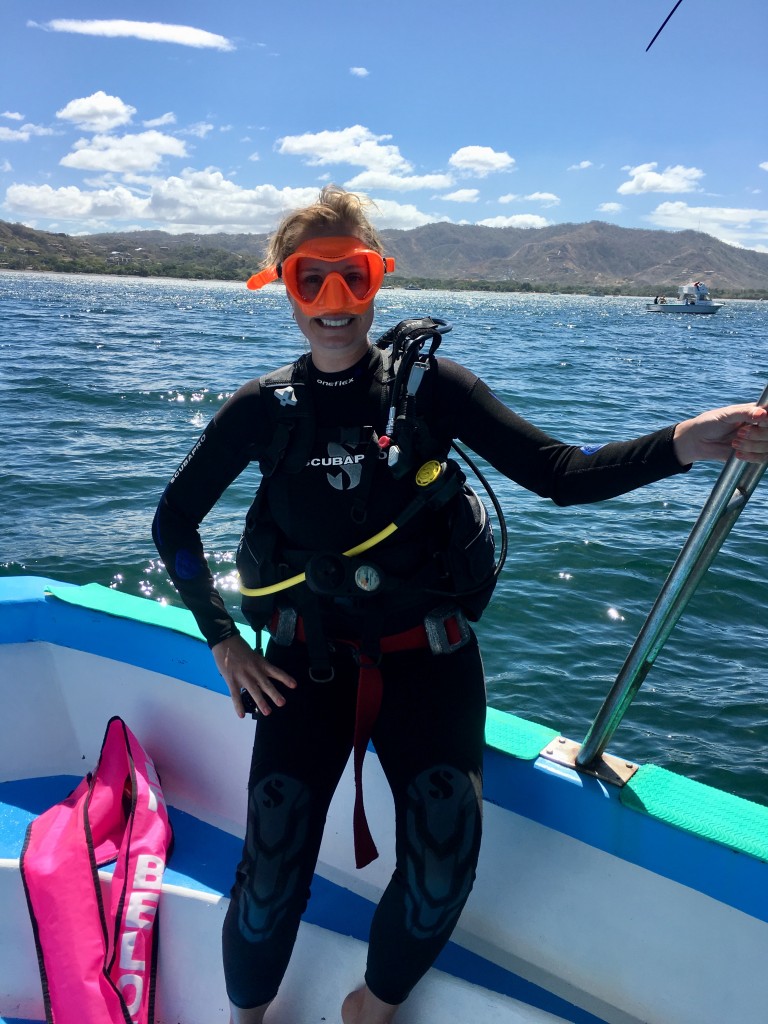 While one instructor refreshed our memories on diving basics, the other scurried around, clipping tiny weights to our BCD’s, intended to offset the buoyancy our tanks created. Then, one by one, we perched on the edge of the boat, holding our regulators to our mouths and tipping backward into the water. The ocean was warm and familiar.

After another quick review of our communication signals and breathing basics, it was time to lower ourselves down the anchor line. It was at this moment that I noticed how murky the water was. It had been unusually windy the past week; I put two and two together—we weren’t going to see much.

The two other students disappeared one by one into the water that now looked black. I took a few breaths above the water through my regulator. The air was thin and unsubstantial. I instinctively sucked harder, then felt a bolt of panic and promptly removed it. “It works better under the water,” one of the instructors assured me in his buoyant Irish accent. “OK,” I nodded. This time, I put it to my face just before I lowered my head into the water. Half a foot down the rope, my body flooded with panic again, suddenly desperate. I clambered back up towards daylight and broke the surface, gulping back the sweet, thick oxygen. “It’s OK, just take a few minutes, we’re in no rush,” came the voice. “I’m so embarrassed, I’m usually so comfortable in the water,” I pleaded. I started thinking I wouldn’t be able to do the dive at all. I’d disappoint my instructor, James, myself—thoughts which did nothing to calm me.

Our favorite breakfast spot. “The bus.”

I tried a second time and got a little further down the rope until panic came again, desperate and complete. I wasn’t sure how many more times I could do this. The main instructor came back up the rope to help out. I felt bad for my fellow divers—probably whooping it up on the ocean floor Little Mermaid style while I wimped out less than 5 minutes in. This time, my instructor descended the rope with me, her face just a foot from mine, her hand making a slow “in…out” motion towards her mouth and away. It was all I needed. My breaths had been too shallow, too quick, too habitual. I summoned my inner yogi and descended into darkness.

Every few minutes the shadow of panic would sweep through me again, but as we went deeper, leaving real air further and further out of reach, I slowly began to trust. I had to believe in the equipment, my own little cocoon of survival. I held the regulator to my mouth with an iron grip, fighting the fear with breath—slow, deep, and purposeful. 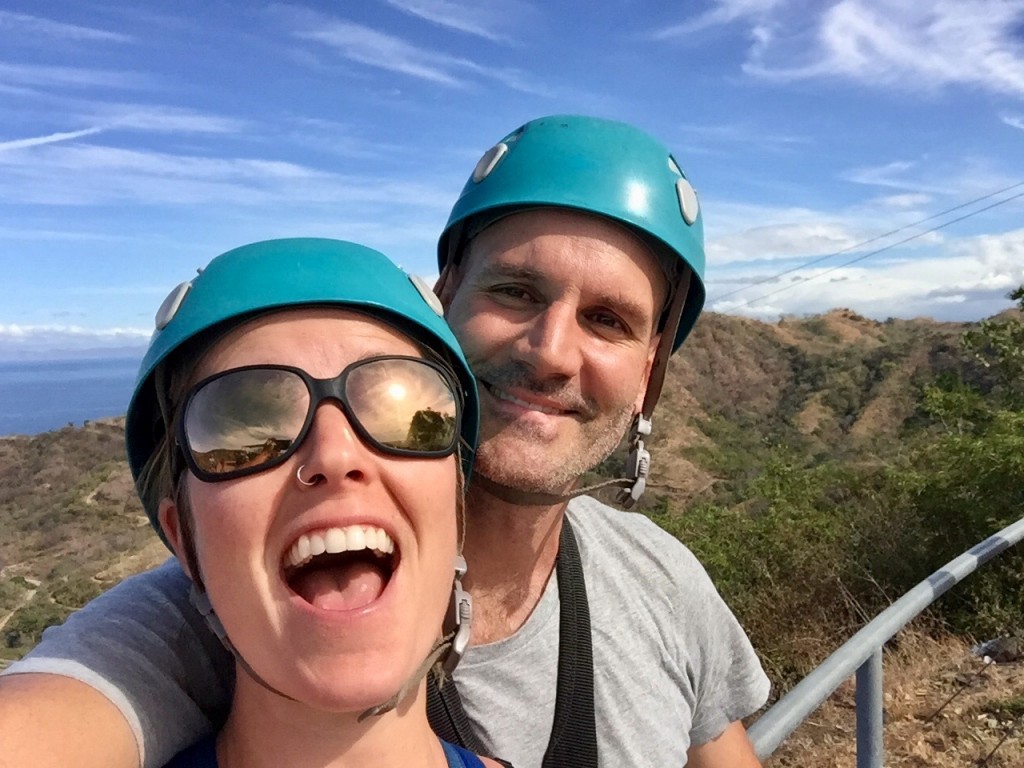 Lucky to have this one who gets me doing new things.

My flippers made contact with the ocean floor and I suddenly felt more grounded. The instructors hovered, adjusting our weights to keep us perfectly poised just above the sand. I felt like a kid, afraid of the dark, not wanting to let them out of my sight. Their instructions were slow and exaggerated—communication underwater was stunted, emoji-like hand symbols and nods of the head taking the place of language. I had expected tropical blues and aquamarines spotted with yellow fish and purple coral. But just as I suspected, visibility was the poorest it had been in months. We saw a handful of rays and a fish or two, a nice distraction from the threat of imminent suffocation. And I was fine with that: my goals for the dive had shifted dramatically.

I kept breathing, in and out, letting my mind wander occasionally to the gift of being allowed into this utterly inhospitable, beautiful realm. Next time, I thought, I won’t panic, the water will be clear, and the fish will be plentiful. But today, just breathing was victory enough.

Prowess in surfing and diving was years away, I knew that. But trying them reminded me how critical it is to leave our safe, known worlds—whether that be jobs, relationships, cities, or sporting activities. Only then can we enter that powerful state of incompetence, which, in the writer Seth Godin’s words, “accompanies all growth.” 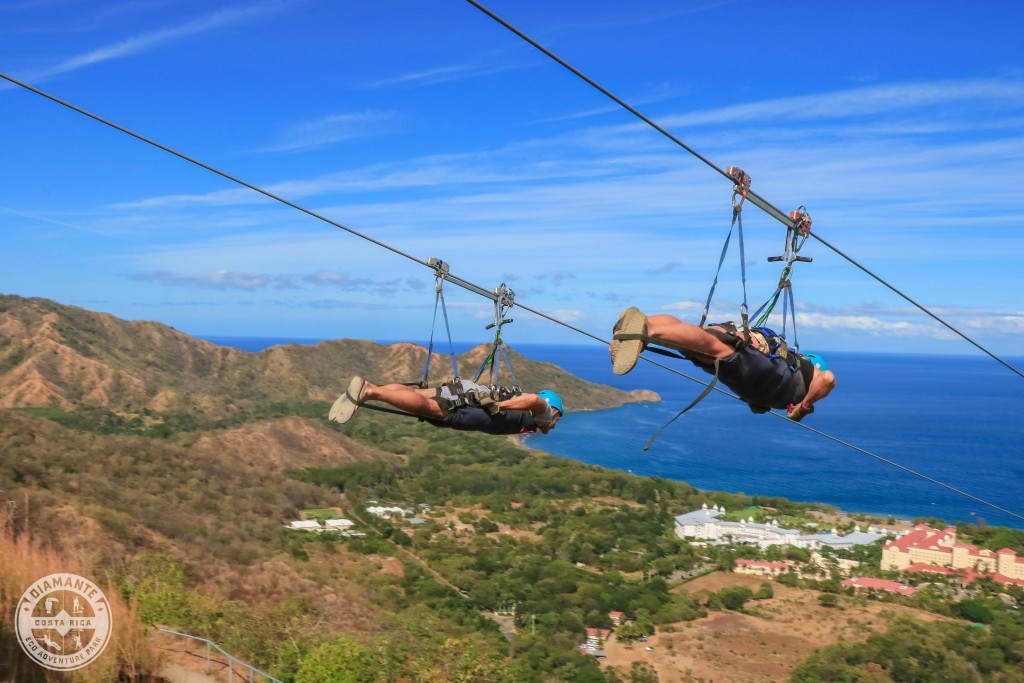 Travel is one of the best ways to get uncomfortable, and as lovely as the 5-star hotels had been, I was glad we’d fled the nest. “Do something every day that scares you,” went the maxim—one that had always irked me. If fear was just a more dramatic way of saying discomfort, incompetence, inadequacy. Surely, I could find plenty of those things.

Surfing, diving, and later zip lining (which seemed painless compared to my two water-born misadventures) reminded me of how it felt to do my first century ride or swim in the ocean for the first time or attempt an Ironman. These quintessentially Costa Rican experiences made me feel small and incapable—and incredibly alive.