“Our three basic needs, for food and security and love, are so mixed and mingled and entwined that we cannot straightly think of one without the others. So it happens that when I write of hunger, I am really writing about love and the hunger for it.” – MFK Fisher

Anyone who knows me knows how much I love food. I also, however, suffer from a tendency toward asceticism or self-denial. A fear of pleasure, if you will. It’s an equation that triathlon has helped me solve for a long time—as if extreme exercise would somehow exonerate or counter the pleasures I did allowed myself.

That’s a long preamble to the real point of this post: if you’re going to pick somewhere to recover from an Ironman, I’d highly recommend Austria. 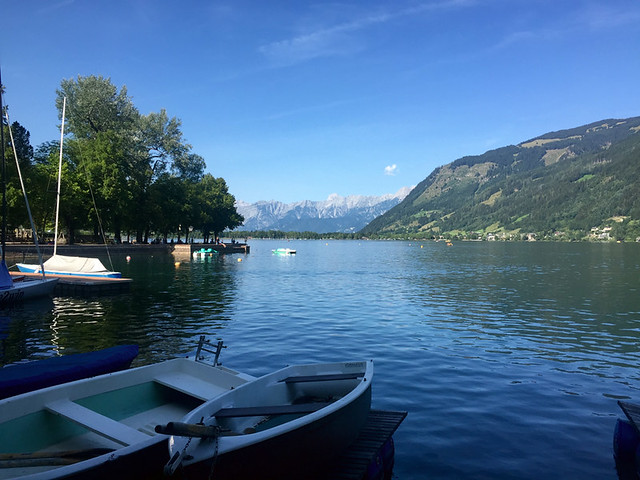 Zell am See, an incredible place to spend a week. 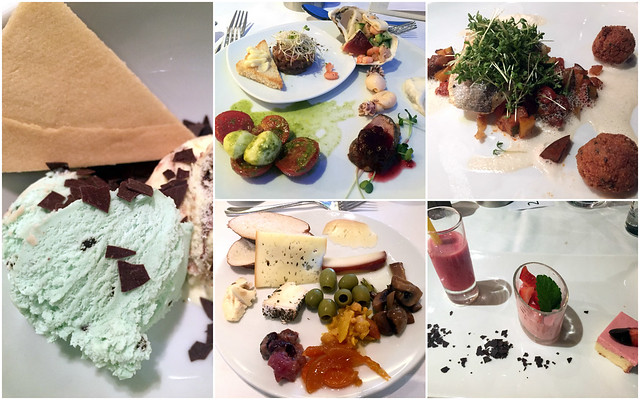 The Tuesday after Ironman Copenhagen (ahem, my BEST RACE EVER thankyouverymuch, notthatIwanttokeeptalkingaboutit), I flew to the Austrian alpine town of Zell am See-Kaprun for the Ironman 70.3 World Championship. (It changes locations every year, unlike the world champs which is always in Hawaii.) The week was forecasted to be HOT (of course, it was an event I a la Coeur d’Alene and Frankfurt), but my arrival day was cloudy and cool. Perfect weather for spa-ing. 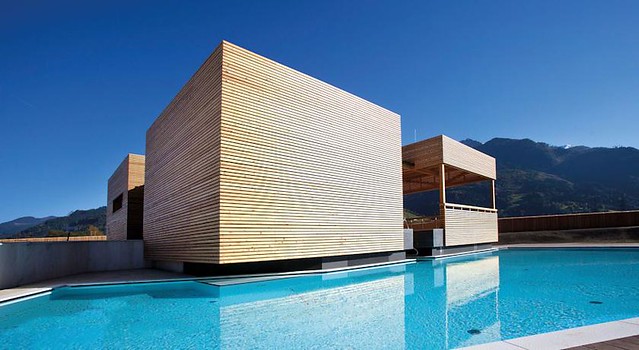 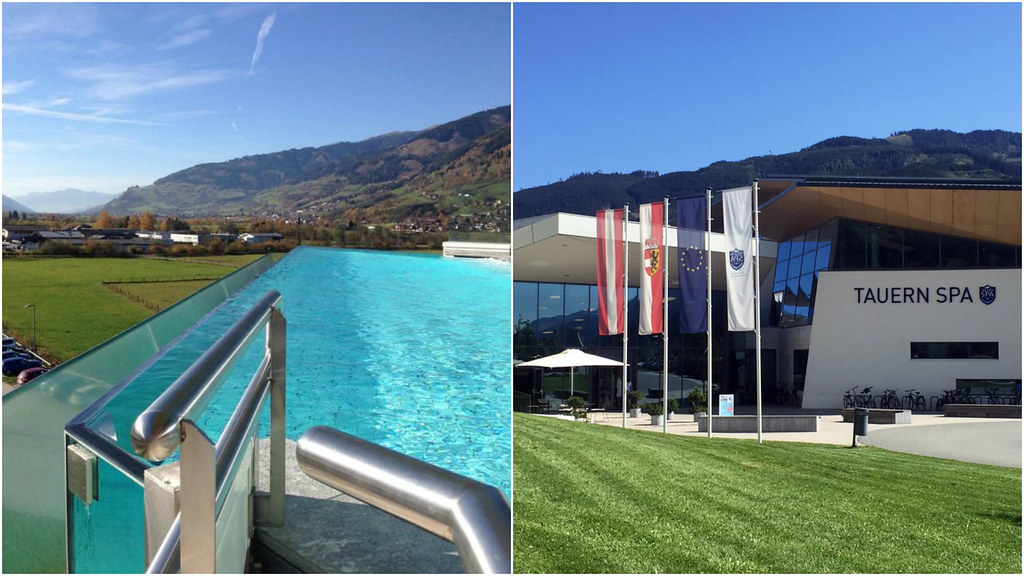 The skyline pool, and main entrance.

After unpacking and getting settled at my posh new headquarters, The Tauern Spa, I put on my hotel robe, packed the cute spa bag they leave for you, and sauntered down to their world-class “spa world.” There I was informed that the bathing-suit spa was to my left, and the nude spa straight ahead. Off I went in the direction of boldness, and with just one shy glance around me, let my robe slip off my shoulders—saying a silent prayer that none of my male coworkers had had the same idea. #awkward

The Tauern Spa has about 10 different steam rooms and saunas of varying sorts, each with a plaque on the door to describe them (temperature, humidity, and benefits to the body/soul) on the outside. There are Finnish dry spas, steam rooms, salt mineral baths, and various “infusion hours” run by staff, such as the mint one I tried. Outdoors are numerous cooler pools to help bring your body temperature down, which I guess is part of the whole science of spas. Though I’ve been in a nude spa before in Budapest, this was a new one for me given the co-ed nature. It was, I must say, rather liberating to be naked and unafraid, so to speak, among complete strangers. 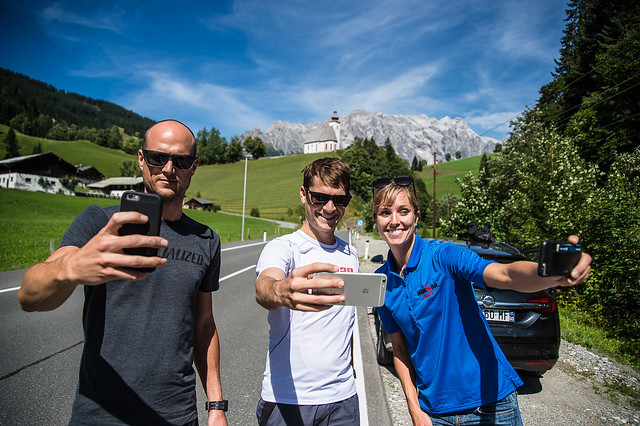 Taking a “Zell-fie” with NASCAR race drivers, Josh Wise and Landon Cassill, for a story Nils and I did together.

I hung out for two hours and then headed back to my room to write my GRE essay-length Copenhagen race report, followed up by the first of many all included meals. I met a wonderful couple from Brazil who were happy to entertain me through all five courses.

After that initial day, things went slightly downhill in terms of the stress management and recovery aspect (this was a work trip, after all), but I was ready for it. I managed to sneak in a quick 30-minute swim in the postcard-perfect Zeller See, but other than that didn’t get much physical activity in aside from walking around town. 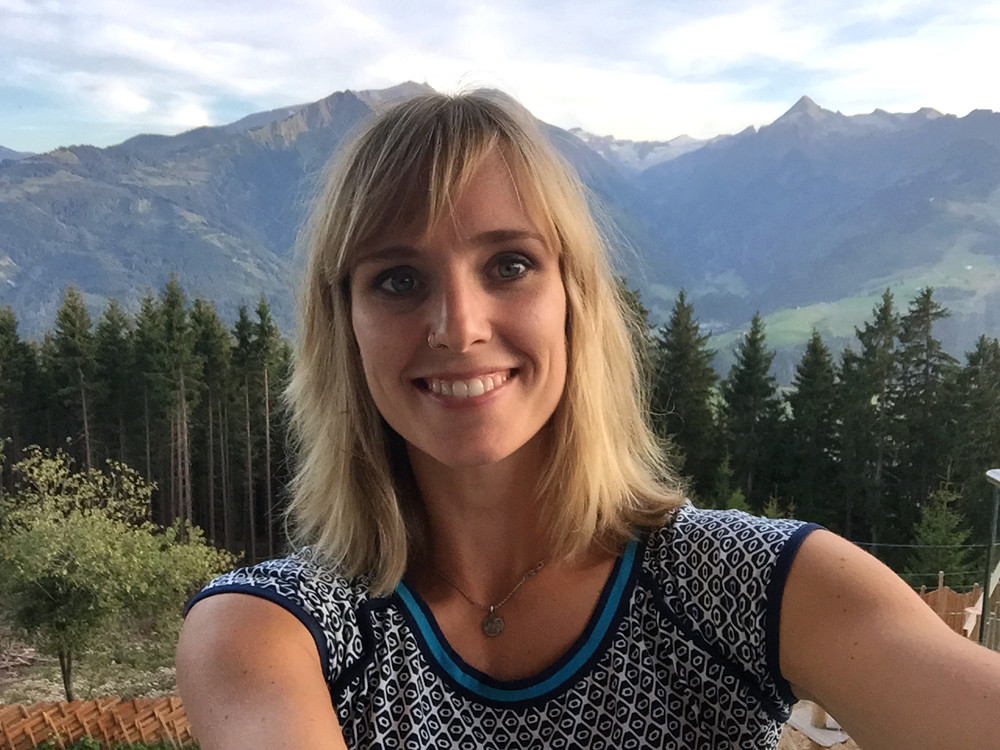 “Zell-fie” on a mountain at a VIP event. 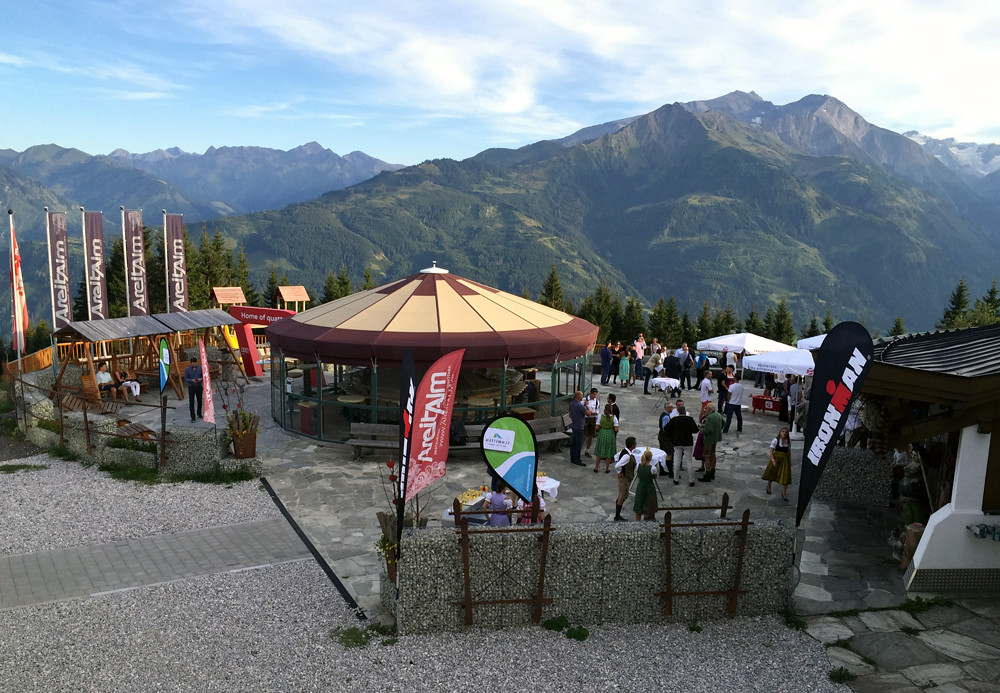 Anyway, I started this post talking about food, and to that I now return.

Most of the nicer hotels in the town include a breakfast buffet and some type of dinner service, as I learned. Breakfast at my hotel turned out to be something I looked forward to while falling asleep at night. There was everything from Bircher muesli (a favorite), to lox, to fresh pretzels, to kombucha, to beet juice to flavored “buttermilks” (essentially yogurt drinks). I could’ve sat there all day if work hadn’t beckoned. Needless to say, I skipped lunch most days after that insane morning feast.

I dined at my hotel a handful of times, at a friend’s hotel, and at a function or two. My friend’s hotel, the Salzburgerhof, was the most memorable; if not for the company, then for the artful, five-course “small bites” style menu complemented with impressive salad, cheese, and dessert buffets. One of my favorite memories is standing, perplexed by indecision, at the dessert buffet, when a tall, slim, Austrian woman beside me advised me to go for one of each, as Austria was known for its desserts. “They make you strong.” (Sure, lady, if that’s what helps you sleep at night.) 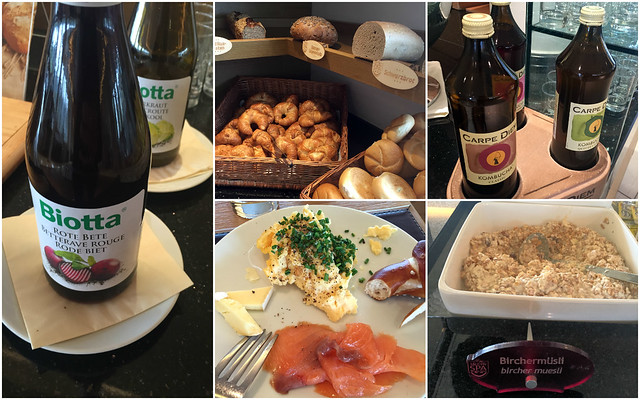 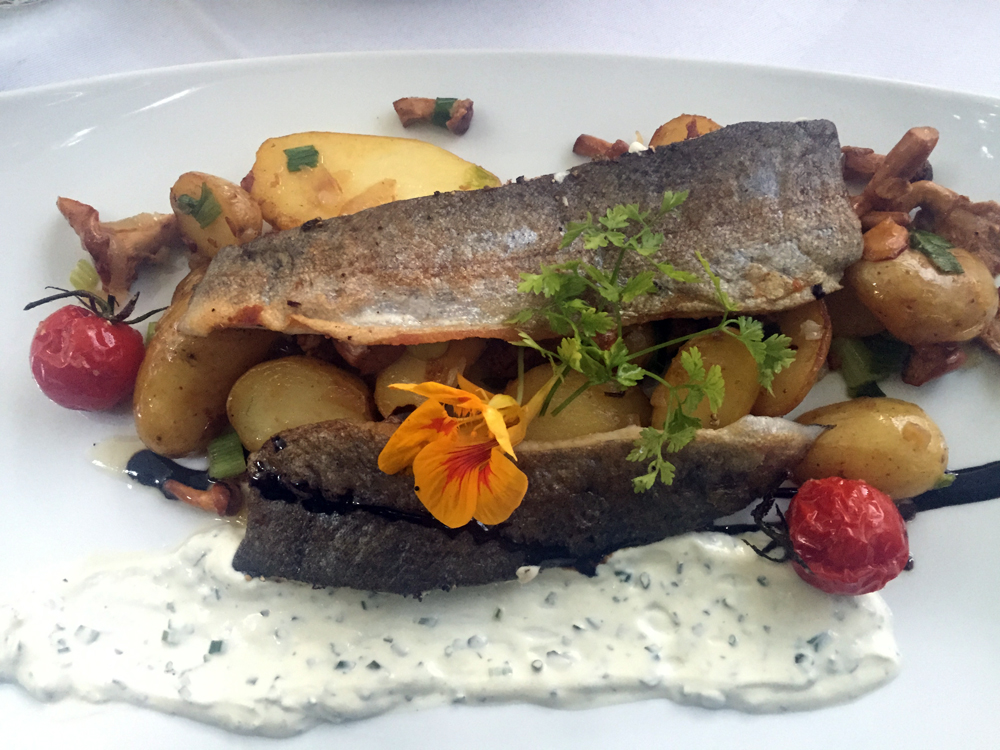 Lake trout at a meal with coworkers. 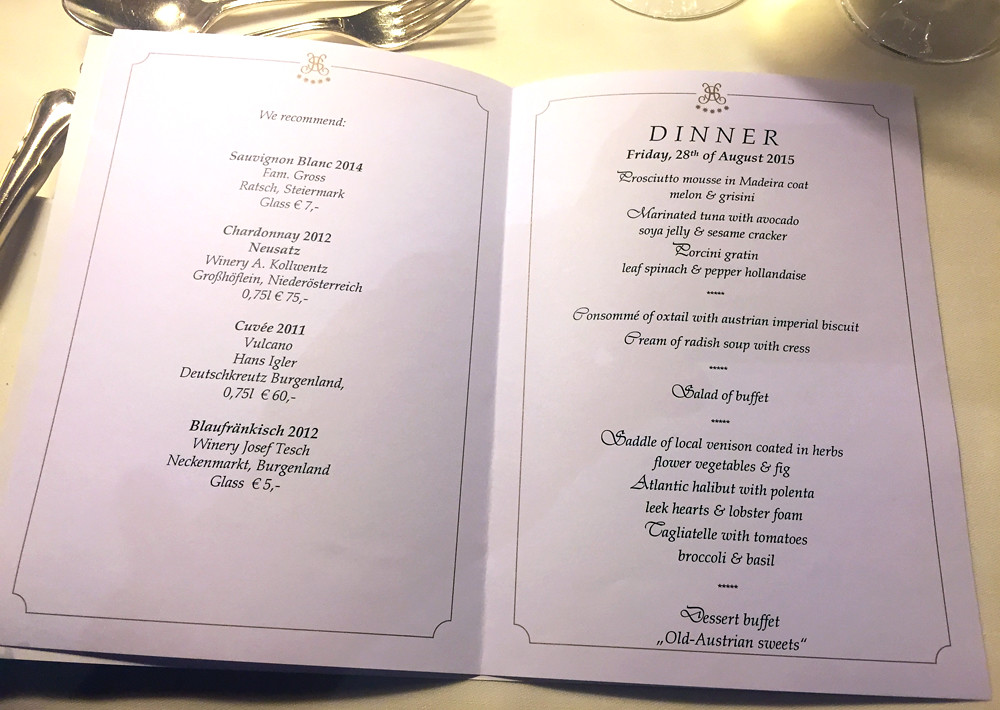 The menu from dinner with friends at the Hotel Salzburgerhof.

After a few days of the expected physical hunger after an Ironman, I start to feel a deeper, almost psychological hunger. Perhaps this is because I tend to deny myself during training, because I like to feel lean and light going into a race (I was 140 for Ironman Copenhagen—lighter than I’ve been for awhile and which felt great to race at).

All I know is, for those few days in Austria, I just couldn’t get enough food. (Sidenote: Caitlin linked to this fascinating article the other day, on how female athletes might need upwards of 3,500 calories a day—something I definitely wasn’t hitting on a regular basis. Definitely worth a read if you’re interested in this kind of stuff.) I doubt the sudden hunger was actually my body making up for lost calories, but who knows. Maybe it’s the body’s way of begging to be indulged and celebrated when it has been pounded into submission for so long. Maybe it’s just things craving balance. Maybe I’m just insatiable. 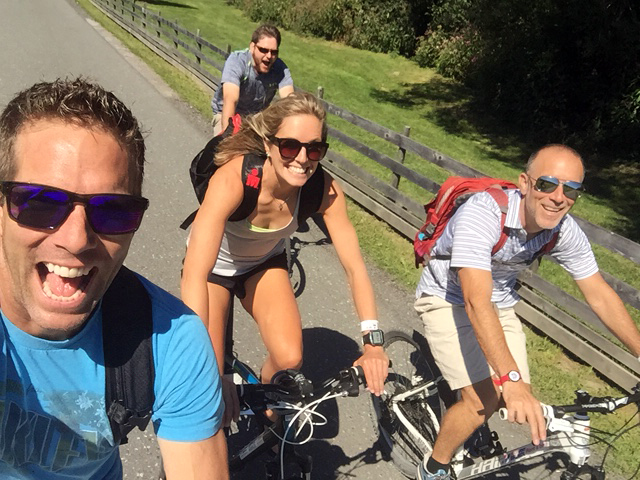 On our hotel’s rental bikes with Michael and Texas Crew guys. 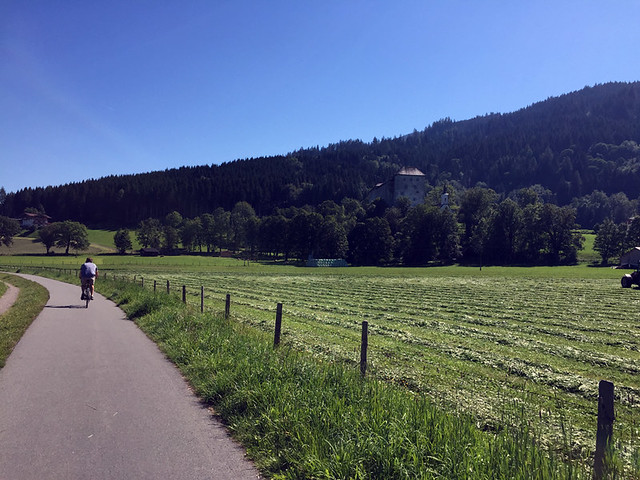 I know that I can’t and won’t keep it up for long. For one, I don’t have a five-course spread at my disposal every night, and I know I’ll start feeling craving my old routines soon. But I’m trying to let that desire come in its own time, trying to let go and not feel guilty. I’ve been enmeshed in training for some race or another for a long, long time, year-round, and in some ways, I’m just tired. Not burnt out, perse, maybe simply needing a true off season, not just a month as I tend to take before signing up for something else. It’s the usual ping-pong of thoughts: “I had a great race, I can’t lose the fitness and momentum now!” “I think I want a year off from the Ironman distance.” “Come on Jen don’t stop now!” “Why don’t you quit while you’re ahead? Five is a number of Ironmans to stop at…” And on and on my mind goes like a monkey from branch to branch.

I have to remember that it’s still only my tenth day out from racing and my second day home—the lingering jet lag and fatigue is probably be leading me to think irrational, extremist thoughts of quittingprobably put inclinations to quit (triathlon, among other things!) aside until I’m more balanced. It’s a post-race depression or fog I’ve been in many times before. Thankfully, this time around I’ve noticed much less of that—maybe due to the adrenaline of work travel, or the fact that it was my fifth rodeo. Whatever the cause, I’ll gladly take excitement for the breakfast buffet over not wanting to get up in the morning. 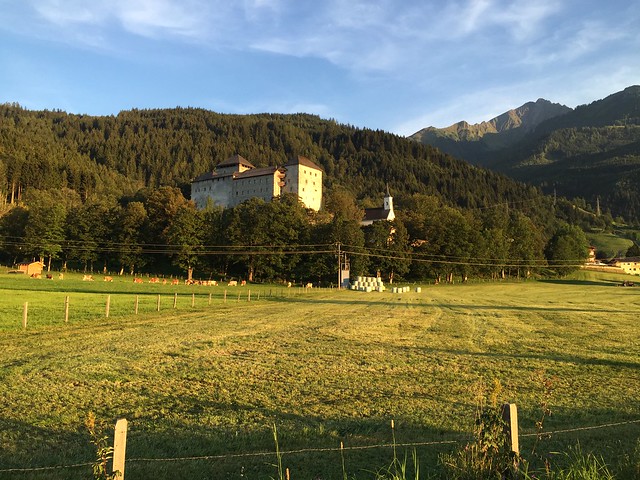 A castle near my hotel’s property.

I’m thoroughly enjoying these two weeks of nesting, after a very busy few weeks. The little things—doing laundry, grocery shopping, catching up on emails, chatting with my mom over morning coffee, cooking in my own kitchen, cuddling with my cat—are perfect right now.

In a few hours, however, I shall jump back in the saddle of my bike. Maybe I’ll feel the magnetic pull of another finish line; maybe I’ll just enjoy the whir of wheels on a fresh San Diego morning, as summer slowly turns to fall.

5 thoughts on “all you can eat recovery”