featured image from Wiki How

I ran the San Diego Rock n’ Roll Half Marathon yesterday, my first open 13.1 since February 2014. Aside from the fact that I woke up at 3:30 a.m. cursing—even triathlons don’t make us get up this early!—it was a golden nugget in a treasure chest of a weekend.

A weekend marked by momentum, multiplied by two.

Late afternoon on Friday, some good news came down the ol’ career pipeline that I’ve been waiting a long time for. Be bold, says Marissa Meyer. Ask, say the researchers behind Women Don’t Ask. Lean in, says Sheryl Sandburg. I’ve read and talked about it so much that I just wanted closure, but in reality these things are both transactional and relational—not to mention frustrating, fascinating, and psychological. It feels really good to have my hard-working nature recognized in a way that matters. 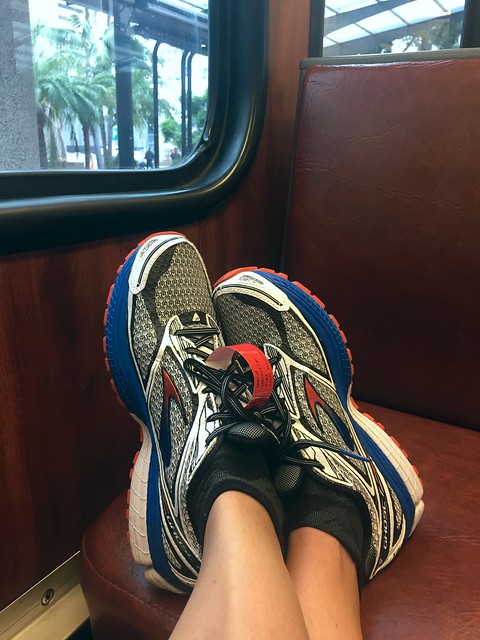 New kicks: The ugly, but oh so comfy Brooks Ghost 7’s. A fave.

On the heels of the news, I co-opted Mark’s plans to watch hockey at our favorite local watering hole as my own celebration. On Saturday, I rode short and easy with friends, and then Mark escorted me to the convention center for a quick in-n-out packet pick up (no energy bar sampling for me, thanks). We then hit the Asian markets for a spontaneous re-stocking of all things pickled, seaweedy, and pork-belly-esque. (Don’t ask.) That afternoon I made 10 pounds of kimchi and crashed at 9, knowing I had to catch a train at 4:20 the next morning.

My friend Becky and I took the Coaster down to the race site together, which offered a special $8 round-trip deal for runners. (I highly recommend this option for North County residents.) We had an hour to kill before our 6:50 start time, so we spent some QT together waiting in lines. First for coffee at a crowded Starbucks, then for the port-a-potties. 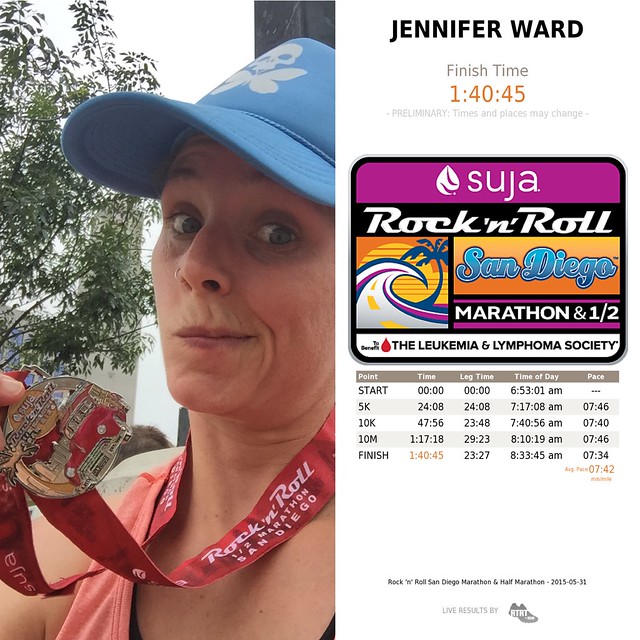 Goofy selfie collage of my medal and digital finisher “badge.”

For some reason, I ended up in Corral 2 of many, and tucked myself in the 1:45 pace group led by the one and only Deena Kastor! About a mile in—after I got over the fact that I was going to run a half-marathon with Deena Kastor and found some unexpected pep in my step—I started to pick up the pace. There was a chance this would not go well, but I didn’t really care. If I crashed, I crashed.

And despite [insert lame triathlete excuse my friend Becky would have nothing of] I ran well! My best half-marathon time is 1:38:18, on a flat and fast course in the middle of a successful Ironman build, so going two minutes slower on a hillier course feels good. Now I just have to do that off 200+ watts, as my friend Jordan texted me afterward. 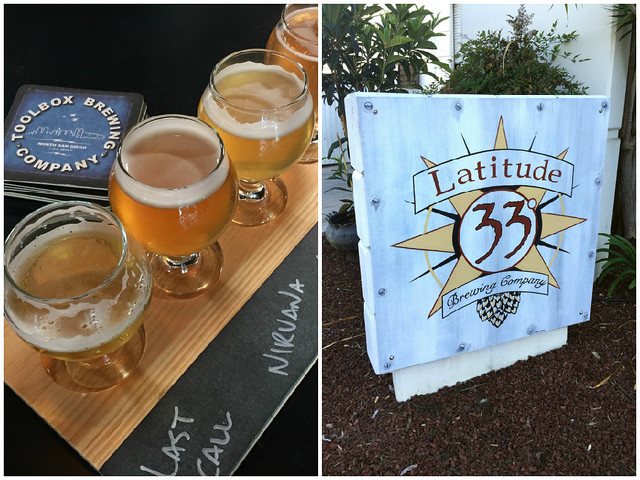 I got out of there fast, Coaster-ed it back home, devoured a latte and avo-and-eggs-on-sourdough, then headed out for an easy spin with Mark and Dan. Later on, we visited two new breweries—Toolbox and Latitude 33 in Carlsbad. A completely non-nutritious dinner of steamed bean buns—another Asian market score—and (of course) popcorn, rounded things out for the day nicely.

Today, my legs are gloriously sore and my outlook is fresh. I’ve decided not to race Ironman Canada because of increased work hours and responsibility (I know, lots of people race Ironman with more going on than me, but I’m just not feeling it right now), which gets me down a little, but knowing that I can run at a sub-8 pace for 13 miles is rejuvenating. Especially with all the slow, off-the-bike running these past two years have seen.

I’ll have to go when the whistle blows, the whistle knows my name.
Baby, I was born on a train. – Arcade Fire covering the Magnetic Fields