Ironman 70.3 Oceanside is special to me for a few reasons. It was my first half—completed back in 2011 when I was a fresh West Coast transplant and still somewhat new to the sport. I’d spend the next three years working the event rather than participating in it, but Oceanside still feels like my “hometown half;” it’s where I cut my teeth on long-course tri, learned how to interview a pro, and got made fun of by my boss for swimming 41 minutes. (Which then, thankfully, lead to an invitation to swim North County Masters.)

This year, I was excited to swim the harbor I’ve circled on many an easy ride, pedal Camp Pendleton’s familiar wind-swept roads and lonely hills, and run Oceanside’s unforgiving concrete—all while surrounded by familiar faces. Even racing 10 time zones away or going sub-5 in the capital of cool can’t beat that. 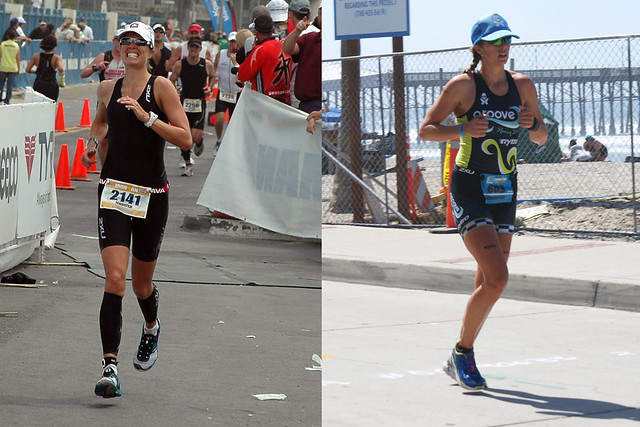 I was surprisingly anxious for my 10th go at this distance. I’m sure the memory of not finishing my last 70.3 was weighing on me. I was irritable, flitting around like a whirling dervish all day Thursday due to excess taper energy. But I also had the positive kind of anxiety: I had a hard time sleeping that night I was so amped by visions of greatness. (i.e. finally being able to run in one of these things.) We’re selectively forgetful when it comes to racing, aren’t we?

Desert Tri affirmed that the Botox injection I’d gotten in my esophagus in September had worn off, and that I could still bike hard and run OK. The weeks following brought about some solid training, and an energizing taper of yoga and green smoothies, treadmill pick-ups and easy spins. I shoved Gus aside and tried to focus on accepting (and enjoying!) my current level of fitness. An unusually high-energy activity at yoga teacher training Friday night might have helped release some of that energy, because I slept soundly that night. 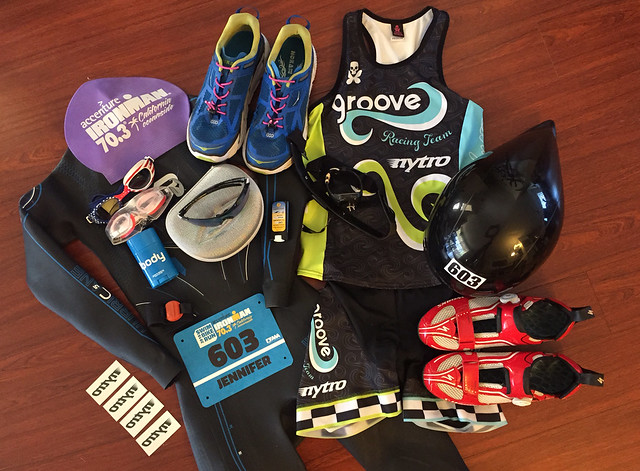 The obligatory gear spread. Thanks to Groove for all the sweetness!

On race morning I woke at four to eat a new pre-race concoction: a cup of white rice—a so-called “low residue” carb—heated with a Tbsp each of coconut butter and maple syrup, plus a cup of unsweetened applesauce for a total of ~500 calories. Since coffee sometimes seems to aggravate daily symptoms of my issue, I decided to try not having coffee for the first time and instead downed two bottles of caffeinated Nuun.

“Don’t try anything new on race day,” is a familiar maxim, but I’ve tried everything in the books to no avail, so why not keep experimenting? Part of Thursday’s anxiety probably stemmed from the fact that I still, after all these years, don’t have a reliable nutrition plan. The burping conundrum aside, I don’t suffer from the usual nutrition woes: I rarely bonk or experience a sloshy or overactive gut. And, to reiterate, I’ve tried just about every strategy and product out there. 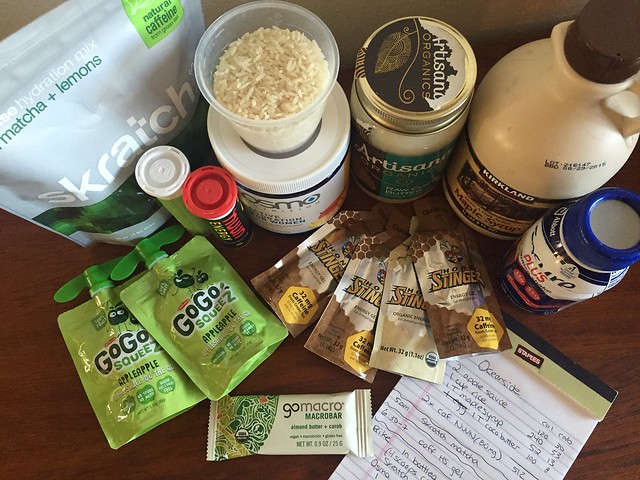 I am such a nerd.

Still, I hemmed and hawed about calories and carbohydrates right up to the final hour. The above photo shows my nerdy notes and random product spread. 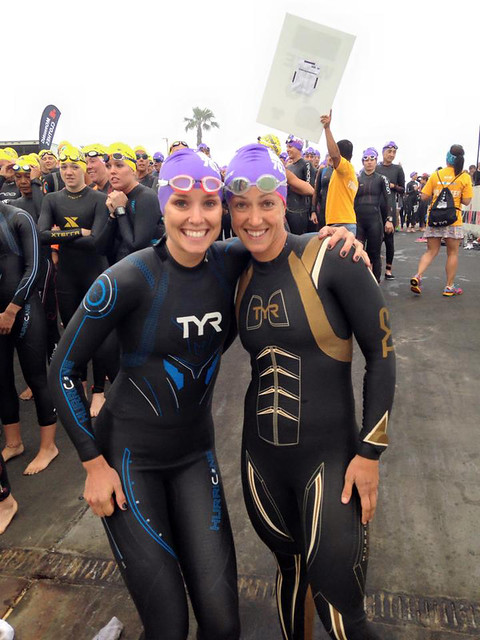 A shot of Becky and I before the flat demons came and wrecked her race.

As if I’d cleared my system of anxiety during the two days prior, I was completely calm come race morning. We’d checked our bike and run gear the day prior (genius!), so all I had to grab race morning was my swim gear, helmet, and nutrition. I got a ride to Oceanside with our neighbor, Jayson, who was also racing. (Mark and Jayson’s wife carpooled up later.) The race site was covered by a thick marine fog when we arrived, and I was happy I’d be able to wear my favorite clear goggles (Aquasphere 180’s). Halfway through the swim I cursed myself for the choice, however, as the sun came out in blazing glory.

I welcomed my new 35-39 age group, waving a symbolic goodbye to the lighting-fast 30-34’s and settling into a new “era” of racing, if you will. I dog-paddled boldly to the front of the wave, lining up beside my good friend and super-athlete Becky. (Who, thanks to two flat tires, didn’t get the day she so deserved.) Given how my swimming has been going, I thought I’d PR the swim, but swells, the blinding sun, and navigating around slower swimmers derailed that plan. But that’s racing! (I was comforted by my Garmin, which reported an “actual pace” of 1:26/100 yards, though my official pace was 1:37, which of course reflects the 1.2 mile race distance and includes the run up to the timing mat.) I was seventh out of the water in my AG, and knocked seven minutes off my 2011 time. Years of work for seven minutes! Good thing I love my Masters swim group. Official swim time: 34:18. 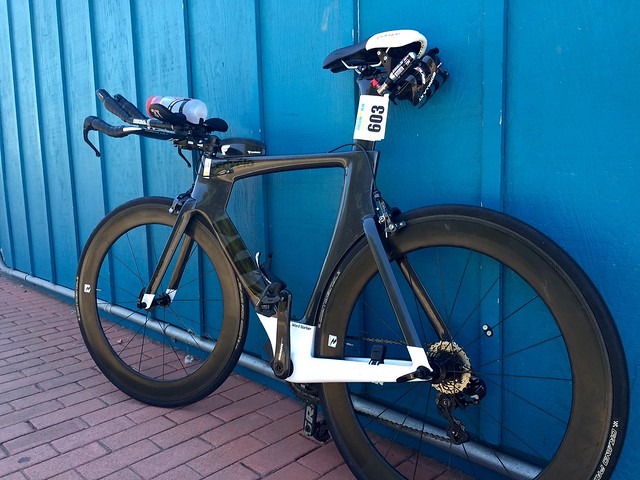 Basically the reason I snuck on to the podium at all.

Once reunited with my P3, I felt ready to rip. The first few miles of the bike is a bit technical, but then opens up onto the fast, smooth roads of the Camp Pendleton Marine Base, where cool and clear conditions welcomed us. I looked at my power meter early on, and when I saw watts in the 240 range, figured it was acting up again, as it has been lately. Those numbers seemed too high for my perceived effort level. As I settled in and started to work, the numbers begun to seem more accurate. Apparently I’d just experienced an early boost of freshness. 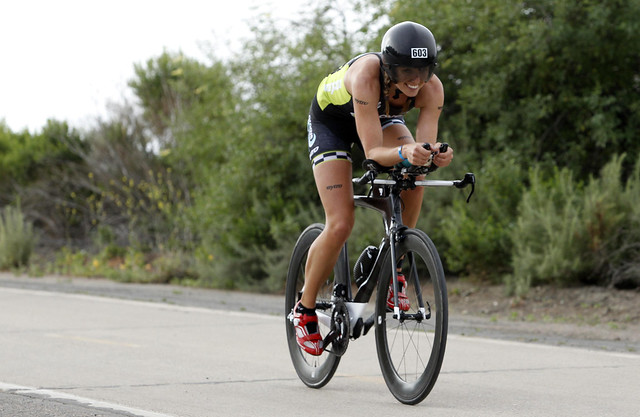 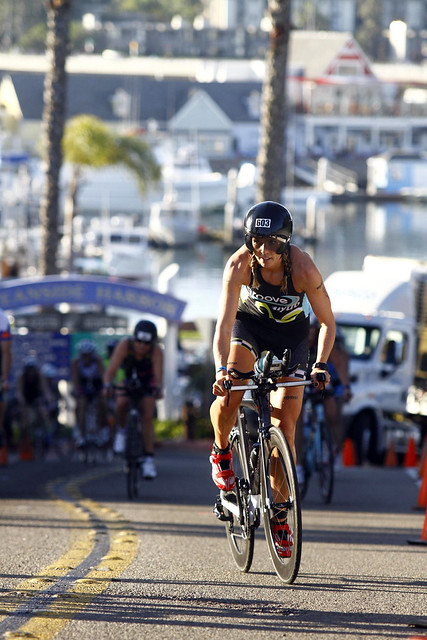 Climbing the little hill out of the harbor.

Quite honestly, I forgot how pretty this course is. Parts reminded me of Santa Barbara wine country, and those 56 miles were a literal oasis of calm in my race. I focused on holding a solid 200+ watts, as I’ve done successfully in the past (and with much more successful runs to follow…argh!), getting my nutrition in, not blowing out my legs on the climbs, and putting some effort in on the downhills. I found two 30-34 women to work with, and thanked one of them out loud for the push as we began the final twists and turns back into the harbor. (I love that sense of camaraderie/competition among other strong cyclists in a race!) I biked a 2:37:14 for the fastest amateur bike split of the day and a 10-minute improvement over 2011. My normalized power was 204 and my average power was 194, for a Variability Index of 1.05, which means I rode smoothly and didn’t spike my effort. Score! 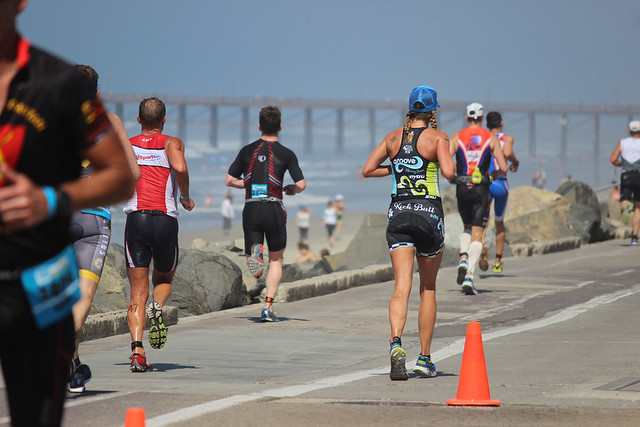 I got off the bike in first, with six minutes over the next woman in my age group. I didn’t know this until later, of course. I took two sips of Ensure and set off at my Olympic-distance pace of 7:30, feeling invincible. I had no belching/tightness in the swim or bike, which I have in my last few races, so was running on pure optimism rule. (Who knows why…lack of coffee? My rice pudding concoction? My molotov cocktail of Skratch, Osmo, Nuun and Carbo Pro? This is why I just really don’t think my problem is nutrition-related.) Knowing I should probably back off a bit, I settled into an 8:11 pace for miles two and three. Mile four was a little slower, at 8:34, and then…

This time I’m stopping here. I’m resisting the urge to write out, mile by mile, the whole damn sob story one more time, as therapeutic as it may be. I’m resisting the urge to drag you, if you’re still reading, through the downward mental spiral of this final leg of racing for me, and my many decisions over the course of those 8 or so miles that I was just done with it all. But I’m going to try something new, as I’m being challenged to in yoga teacher training… 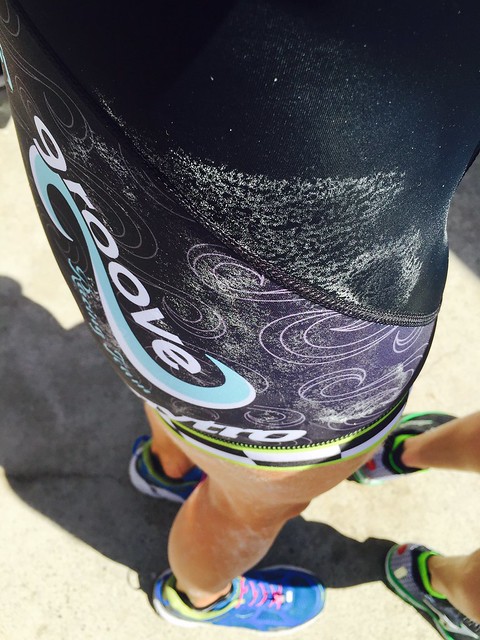 Instead I’m going to write about the beautiful breeze off the ocean and running on the cheers from so many friends and teammates lining the streets cheering, many of them through their own injuries and disappointing days.

I’m going to write about how I placed fifth in my age group for my first ever podium finish at an Ironman event, and that I’m proud of myself. Proud for not giving in to another DNF, when it was all I wanted to do, and proud of my 5:18:34 finish time and 12-minute PR on a tough course among tough competition. I’m going to write about the ridiculous notion that I could make it to the rest of teacher training when I was in the state I was in, and how it took two hours to get my sticky bike from the harbor back to the car and by that time I only had an hour until the awards ceremony and call me lame but I

I’m going to write about the ridiculous notion that I could make it to the rest of teacher training when I was in the state I was in, and how it took two hours to get my sticky bike from the harbor back to the car and by that time I only had an hour until the awards ceremony and call me lame but I really didn’t want to miss it.

I’m going to write about showering at a friend’s rental place up in Oceanside to save time, and texting Jordan for a T-shirt because all I had were my race clothes, and how I stood on stage bra-less and with uncombed hair stuffed in a hat to get my plastic award. How I went to Local Tap House for the second time in a week to celebrate with a friend in town from Winnipeg, and despite every swallow hurting, ate breaded artichoke hearts and drank delicious Refuge Brewery’s Shelter 9 IPA. 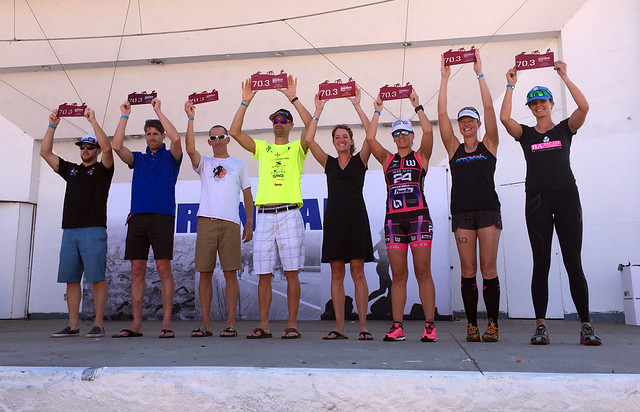 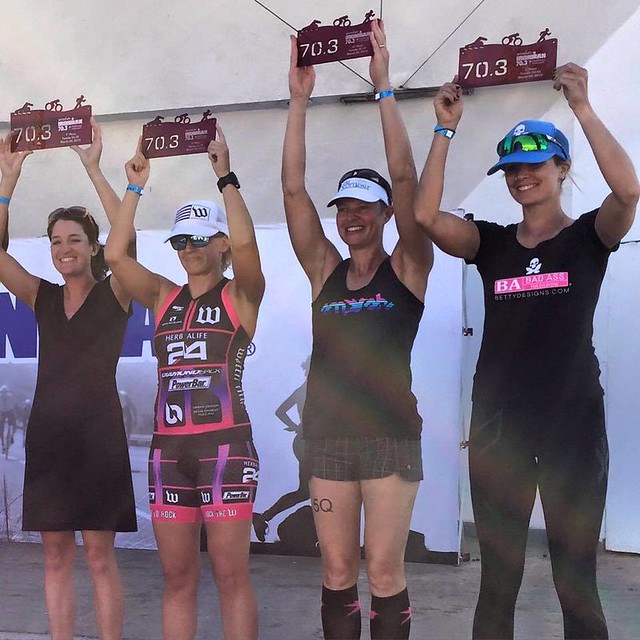 That’s all I’m going to write about today. Oh, and trying to change the empty mantra of “I hope I can fix this,” to “I am going to fix this,” and keep believing there’s a solution. (I’ll save the real story for two weeks from now when I go visit my GI doctor whose latest meds clearly didn’t work and needs to listen this time.)

Until then, I’m not going to let a 1:59:59 half marathon stop me from doing this sport that come Monday, I loved again. I’ll run my sub-8-minute half some other time, some other place. 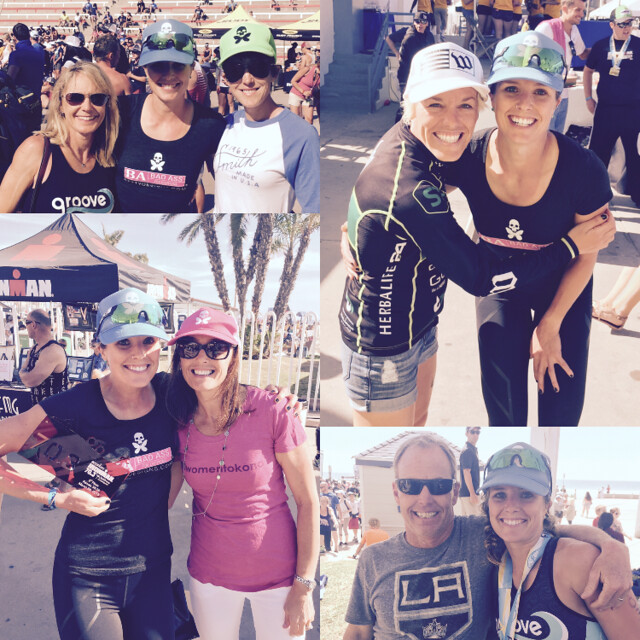 Celebrating friends’ podium performances (Gina, Heather, and Jordan), and reconnecting with others there to support and spectate. 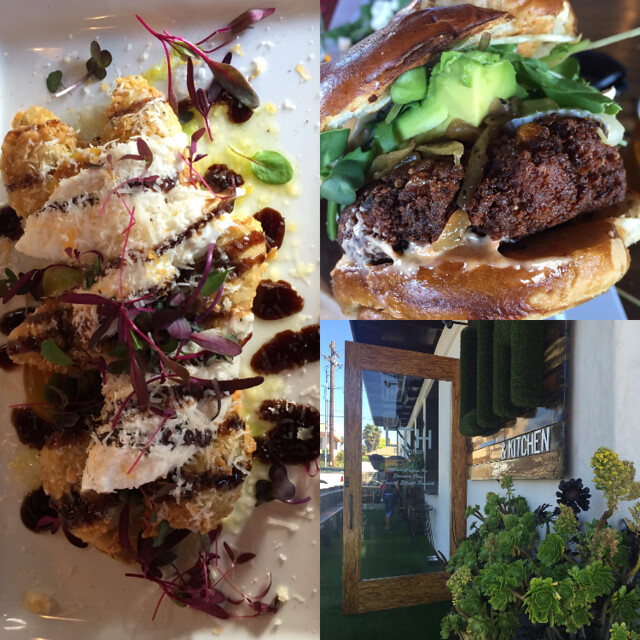 Thanks also to Local Tap House in Oceanside, nutrition sponsor of the weekend.

8 thoughts on “spinning my wheels in Oceanside”