Today marks two full weeks of Paleo eating in the bag. As I begin Week Three, I can’t help but look back over my accomplishments, failures, and more lessons learned.

The thing that stands out most is how much my running has improved. Two long runs on this diet and no belching issues at all. I know I can’t jump to conclusions yet, but this seems like a victory worth celebrating … for now. I’ve also managed to resist popcorn, oatmeal, Chobani yogurt, and Mark’s unbelievable lattes.

As for the failures? Well, I haven’t been following my coach’s meal plan to the T. Lunches of “poached Halibut on a bed of julienne carrots, zucchini and leeks” have been losing to my day job, a busier-than-usual freelance plate, and this recent string of gorgeous summer days. I haven’t been getting in all the “Recovery Homebrew” smoothies included in my plan, which is probably leading to the onset of major munchies which usually hits at about 9 p.m. To satiate myself, I chow down on almonds (which as I’ve recently learned from Nell, isn’t a good idea!) 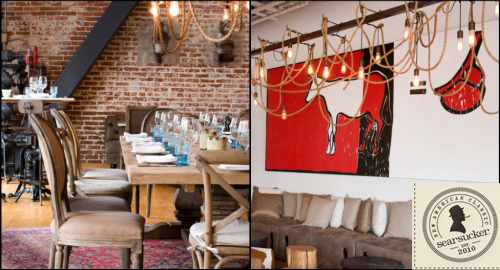 The site of the cheating

And then there was Friday, Mark’s birthday, my first official “cheat night.” No, it wasn’t a night of marital infidelity. I decided that spending money on a meal out just wasn’t smart if I couldn’t enjoy any of it, and settled on Searsucker, a top-chef finalist’s trendy new San Diego spot. Partly because it looked good, partly because it was downtown, kind of a novelty for us North County dwellers. We had their “carb-free” crabcake, artichoke hearts with Gruyere and tomato, and short ribs as appetizers, then shared the Mexican-inspired tongue and cheek (yes, literally), and duck breast with confit. On the side, an arugula, prosciutto, mozzarella, and tomato salad. So yes, it was Paleo only insofar as there was meat, though it was fattier than the diet prescribes. Vegetables were lacking (our choice, those are a la carte), and though grains weren’t featured, there was a significant amount of cheese. (Overall, we were a little disappointed by the food. It was OK, but nothing worth raving about.)

I paid for it the next morning on my 40-mile bike ride, during which my gut rebelled, and I had trouble absorbing water. It’s hard to know if it was eating the prohibited foods, or just eating and drinking a wee bit too much.

I’ve learned a bunch, too. Like that the best kind of deli meats are known as whole cuts, as opposed to the “sectioned and formed” meat products (gross!) or processed meats. Thankfully, Whole Foods just opened a mile from our apartment, and their Applegate farms oven-roasted chicken and turkey breasts are just excellent…especially when paired with some walnuts and pear. (New favorite!) I never really ate deli meat to begin with, but now that I need to be having so much meat, it’s just so easy to turn to.

This article by Phil Lempert outlines what to look for in deli meats, the main issue being sodium nitrite, which is also used alone or with sodium nitrate to fix the color in meat products. (Um, really?) During cooking, however, “nitrites combine with amines naturally present in meat to form carcinogenic N-nitroso compounds,” Lempert says … compounds that are known carcinogens associated with all kinds of cancer. (See the original article for more information on a study done in Sweden.)Another thing I’ve noticed is that I’m craving dairy far more than I am grains. A cold, creamy lick of frozen yogurt or a rubbery slab of mozzarella have tempted me many times over these past few days.

I’m starting to draw conclusions already about this way of eating, which I fire at Mark in small doses through the day. “So I was thinking, about this diet…” The man patiently indulges me every time, as we weigh the pros and cons, what seems to make sense and what seems ridiculous. I am really enjoying trying Paleo out, but I’m not sure I could eat this way for the rest of my life. I read a quote recently in Outside about putting “life in your years,” not just “years on your life.”

Paleo thus far has taught me to be more creative in the kitchen. It wasn’t that I was bad at this before, but over the past year I’ve lapsed. Paleo has helped me make friends with not only a ton of interesting new veggies and greens (rapini, chard, Japanese sweet potato), but methods by which to cook them. The best part of all of this so far is learning that dinner actually comes together more quickly and with less stress than when I used to scour blogs and cookbooks for exotic-looking recipes.

One thought on “my cheatin’ mouth”