My second Paleo Experiment-induced trip to Costco on Sunday ended in me taking home a five-pound top sirloin. I purchased it with the intent of making my own roast beef. I’ve never been a big fan of deli meats, and up until trying this new way of eating didn’t really eat much beef at all. But that, along with many other habits and tendencies, has all changed over the past week.

As the days go on, some of the “symptoms” of going Paleo continue to lessen or disappear. Namely, strange stomach pains, a dry mouth, and periods of mental fogginess. Everything seems pretty much back to normal now, with the addition of new energy, better sleeps, and a pretty consistently positive mental outlook.

It’s always so hard to know with these things which are caused or related to a certain factor (here, the diet), or whether they would’ve happened anyway. That’s the complication with the Paleo way of life. Die-hards claim a lot for it, but could many of those “improvements” be due to them incorporating new and fresher veggies and fruits into their diets?

See the below salad. I would often eat salads for lunch at work, but this new diet prompted me to add some turkey and roast beets (which I blasted under the broiler with garlic and olive oil for 30 minutes, skins and all). The turkey was an early-Paleo Experiment slip-up. It’s deli-style, and even though the ingredients are only “turkey, turkey broth (containing less than 2% salt and vegetable oil),” it’s probably not the best. The black flecks on there aren’t pepper, they’re roasted hemp seeds: delish.

Another thing was red about my day besides the beets? The roast beast.

Yes, you read that right. The roast beast. With apologies to any sensitive vegans out there (though they surely would’ve stopped reading by now), it is rather pleasant to say “roast beast.” It’s from How the Grinch Stole Christmas, and I’ve always found the expression hilarious.

The beast, in this case, was that five-pound hunk of Paleo protein procured from that grocery store where couples like us should really not be shopping. (Costco). We cut it in half and froze the other 2.5 pounds, and then followed Saveur‘s sandwich issue instructions for DIY roast beef: season the tied roast with salt and pepper, sear in a cast-iron skillet until the edges are browned, and then bake at 225 degrees Fahrenheit for three and a half hours. Take the temperature to make sure the interior reaches 130 degrees, cool, slice, and you’re done! 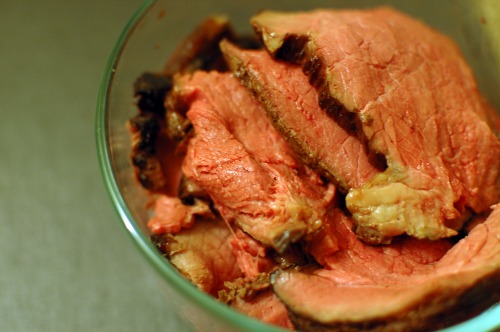 By slow-cooking the meat at such a low temperature, you retain that nice even pink color. Who wants brown-grey roast beast? Not this Who. Mark reported that it’s not really thinly-cut enough for a good sandwich, which makes it even more Paleo-friendly than it already was.

Tonight, post “Andrew” yoga, I had 100 grams of this served with sautéed spinach and some of Mark Bittman’s Spiced Melon Balls. (For this simple summer appetizer, simply mix the balls from a whole cantaloupe plus one whole honeydew with the juice of half a lime, ½ tsp. salt, 1 tsp. ground coriander, 1/4 tsp. cayenne, and 1 Tbsp. finely chopped cilantro.)

1. Don’t add coconut oil to a smoothie with frozen ingredients in it. It will turn to a grimy, greasy slop.

2 .If you’re going to eat roast beast often, invest in an electric meat slicer or marry a butcher.

3. When you go Paleo, it won’t be long before your co-workers start calling you a cavewoman.

5. Choose your cheats wisely: I haven’t “caved” (ha ha) often, but tonight am giving in to Stone’s BELGO Anise Imperial Russian Stout while I watch the season premiere of Weeds. Hey, it’s not easy being a cavewoman.

2 thoughts on “roast beast (and beets)”