Contrary to the do-it-yourself ethos I usually embrace on this blog, over the next few weeks I’m going to feature some products that have won my urban 9 to 5 heart—one that is often too busy to sweat away over multiple-step bread, edible heirloom cookies, or even my favorite summer salad.

As much as I’ve cherished how resourceful it feels making certain breakfast staples yourself, over the past six months I’ve realized how thankful I am for the commercial luxuries of modern life. Processed foods might be evil, but I’ve come to appreciate the less-processed (but still packaged) ones among them for the respite they bring. Besides, after a long day, tough run, and hours spent applying for jobs, who has the time to slaughter a chicken?

First up: this Al Fresco Sweet Apple Chicken Sausage I picked up on a whim the other day, my nostrils full of the scents of summer barbecues. At only 160 calories and 7 grams of fat per link, these babies deliver 14 whole grams of lean protein—just what I needed after a tough 35-mile cycle this morning with my local riding group.

After postponing tonight’s dinner date to tomorrow, I faced a solo supper. And as another near-perfect weekend slipped away, filtered like evening light through the tree branches, I began to ponder the plate: Burritos with that frozen tempeh I needed to use? Salad with the lettuce I didn’t want to spoil? A new twist on the tomato-asparagus omelet I’d had for a post-bike brunch?

The answer was sausage.

My neighbors had been grilling all afternoon, my cravings were becoming fierce. I ripped open the package, doubtful, and popped a link under the broiler. Then I pulled out the brown lentil-and-white bean mix I’d cooked up last week, part of which were made into the hummus that exploded all over my bag after my unfortunate altercation with a taxicab. Inspired by a recent tapas brunch at Jaleo, I poured olive oil into a pan and sauteed a small onion and a clove of garlic with some sage. Then I dumped in a few spoonfuls of the legume mix. But it needed something green … the kale I’d just bought at Glut would do!

I took the blackened sausage out of the oven, piled some of the bean and kale mix on the side, and topped it with fresh lemon and some chili flakes. 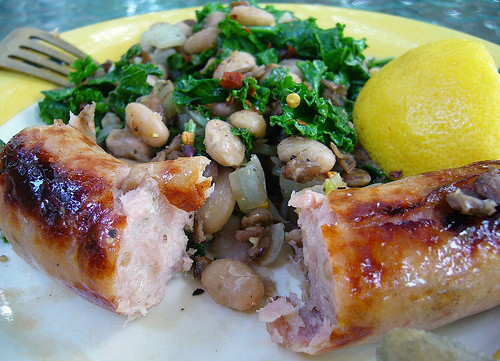 The sausage was surprisingly good–its maple-syrup sweetness not overbearing. As the sausage casing gave way with a yielding snap, I was reminded of why my vegetarianism will only ever be of the pseudo- variety. And since this article on vegan ultra-runner Scott Jurek came out, my athleticism no longer justifies my consumption of animal protein.

Hopefully, the shot of protein will help offset last week’s fatigue. What causes tiredness anyway? An unexpected bout of excitement that eventually must give way to everyday life? Sleep patterns? Boredom? Lack of iron or protein? All I know is that I can’t figure out why some weeks I feel like a slug in Savasana, and others like a caffeinated cheetah.

What a perfect weekend. Swimming, followed by yoga with a thunderstorm soundtrack. Running, yard parties, and a new bra. An impromptu Turkish picnic. A long ride, “chewy” coffee, and a conversation with a much-loved cousin. A slow afternoon eating Spanish tapas for one, and later sipping wine with wonderful housemates.

2 thoughts on “tapas for one”