A weeknight dinner with a friend last week was colored in shades of green: Armed with key lime cupcakes I managed to lure her out to the Maryland boonies. She followed in a healthier suit, offering fresh, local asparagus.

I began to plan out the sustenance for our evening, but I didn’t have to think very hard. As soon as she mentioned her seasonal stalks, a recent Runner’s World recipe for naan bread pizza sprung to mind. Its unique fusion of an Indian staple, pesto, ricotta, and asparagus caught my eye. The fact that I already had half the ingredients on hand sealed the deal. 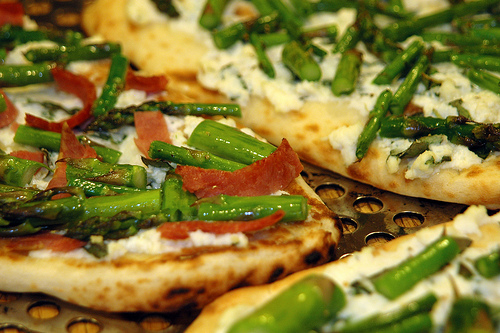 She arrived on a May evening almost warm enough to want to keep dinner a no-oven affair. But I wasn’t about to change the plan just because of a little sweat. We opened the windows, and as we snapped the stalks at the point of tenderness and chopped basil, began our many-weeks-in-waiting catch-up session.

The frozen naan came from a darling Indian grocery store on University Boulevard—the very same one that ended a recent quest for small eggplants. I had turkey bacon in the freezer as well, and had picked up ricotta on my bike ride home. The recipe called for pesto, but my local grocery store isn’t quite so posh, so I bought fresh basil instead. I wasn’t sure what the block of cheese left in my fridge was exactly (Pecorino? Provolone?) but it was whitish and tangy and I was sure it would do. 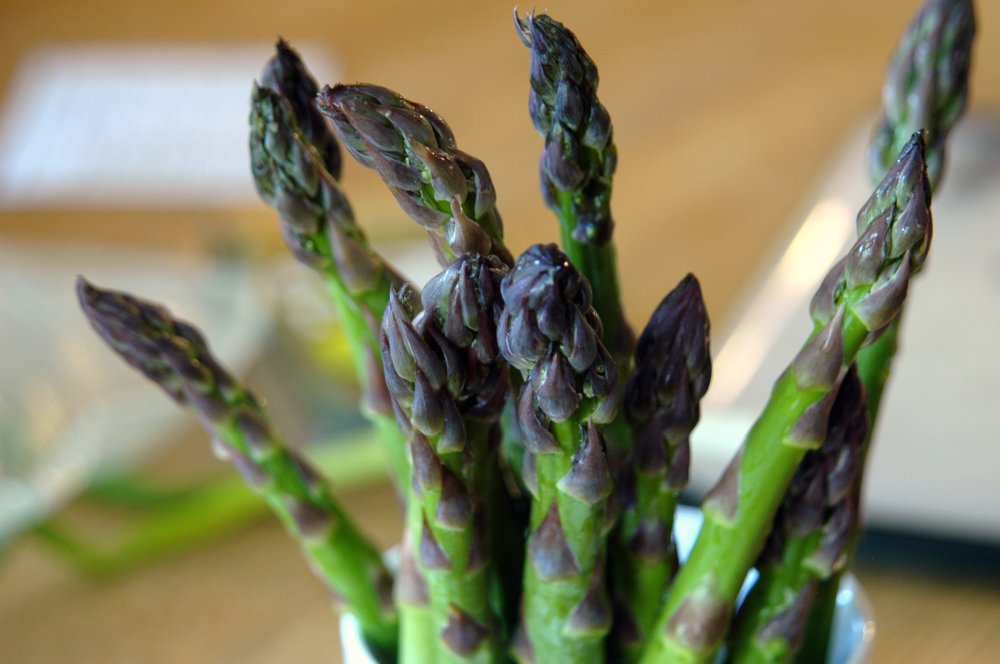 The three mini, triangle-shaped pizzas came out light, crisp, and with a creamy pizza bianca base minus all the fat. I devoured my turkey-bacon topped variety, whereas my companion chose an asparagus-heavy vegetarian version. The pizzas were surprisingly filling but left just a corner for tea and cupcakes on the front porch.

Satiated, we bid the day’s light farewell from the front porch overlooking my blossoming front yard. We talked about our futures in journalism, immigration, family, and of course, relationships.

Yesterday another, less ambrosial occasion for the pizza arose. On my daily, 9-mile commute to work, I had another run-in with a car. Yes, another. It had happened just a few weeks before when a woman made a right turn into my bike lane without signaling. Yesterday’s event was practically a carbon copy, only this time it was a taxi driver (who had apparently signaled), and there was a large container of hummus involved. 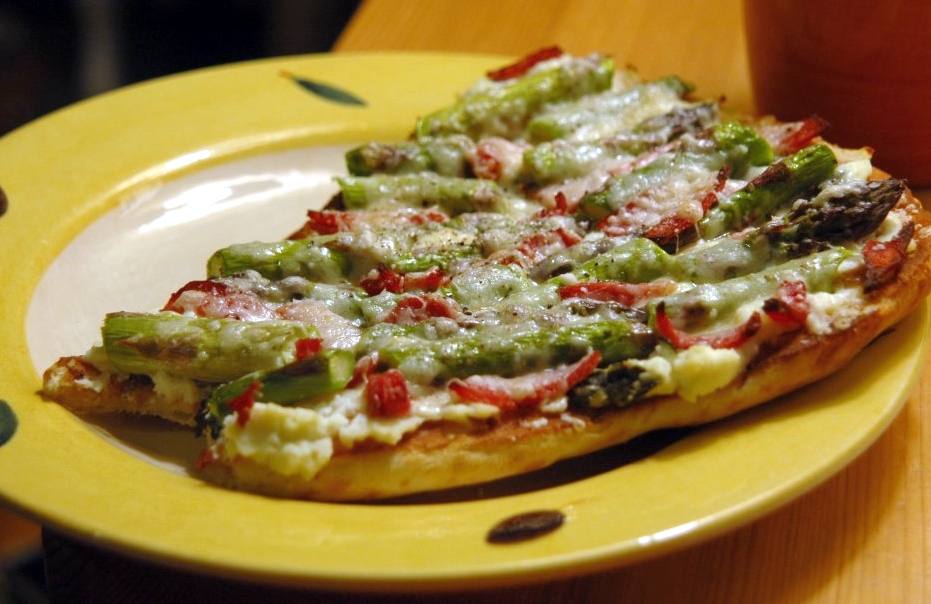 There’s nothing like starting your day off with tears, embarrassment and exploded hummus you got up early to make. Not to mention the family of new bruises and scrapes etched in the shape of tire tread across your shin. I was shaken up all day, and despite ice, my ankle and lower leg ached until sleep arrived to take pain’s place.

After work, I took my bike for some minor brake tweaks, and, still car-spooked, hopped the metro home. Dinner that didn’t require too much thought was definitely in order. 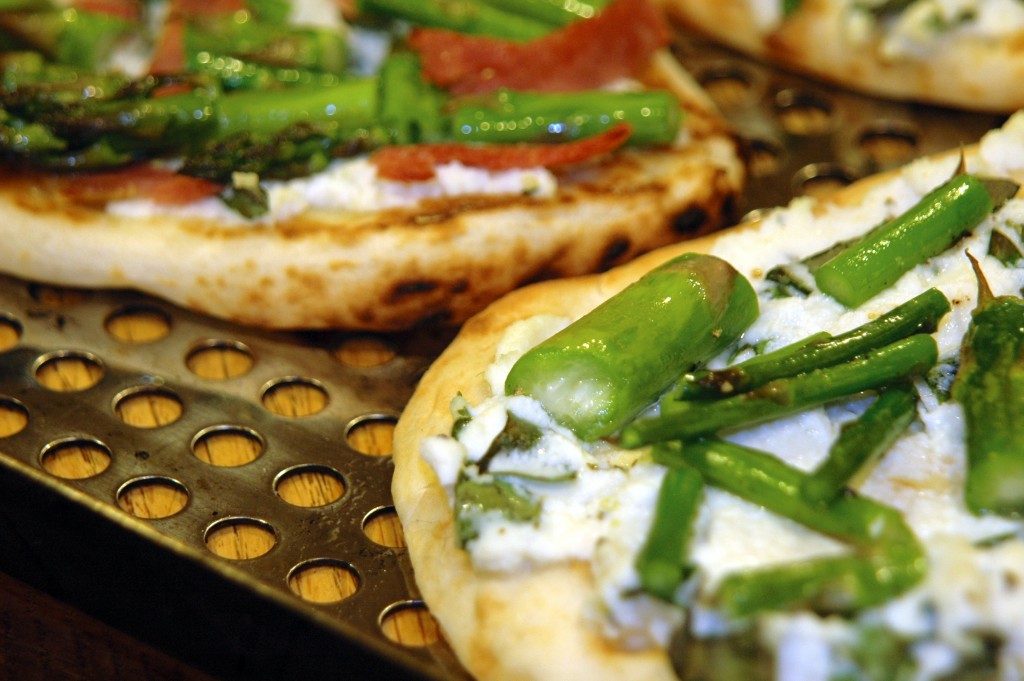 I laughed when I found out that asparagus is rich in rich in bone-building vitamin K, said to protect the body against fractures. I guess that casual dinner last week was more than just a delivery method for fresh spring flavor.

I smiled again when I sat down to eat and opened up the book I’m reading (subtitled “Confessions of Cooking for One and Dining Alone”) to find that the next piece was about a woman who decided to eat asparagus every day for two months one spring. I leave you with her words:

How to be an asparagus superhero

Begin at the first hint of asparagus in your area.

Pick asparagus in the early morning while it is still dewy, or find people who wake up on dewy mornings and pick it for you. Have some coffee.

Week One: Cook the asparagus unadulturated for as long as possible. Keep some eggs and starches—rice, pasta, bread—around, and just enough meat to use as a condiment, like some bacon or a jar of anchovies.

See how fast you can run, how high you can jump. Alone or in company, use your fingers. Have plenty of fluids. Pee regularly. Tell everyone you never skip a day. Eat to impress.

Week Six: Just when you think you cannot be a superhero any longer, break asparagus into bits and hide it inside things.

-Phobe Nobles, from Alone in the Kitchen with an Eggplant. Riverhead Books, 2007.

Follow the amounts if you must. Or just wing it, using this as a guide, like I did. The recipe as it is written serves four.