In Dostoyevsky’s Brothers Karamazov, there’s an entire chapter named after “One Onion.” In it, the ubiquitous allium becomes a symbol for generosity, goodness, and salvation. Recently, one lunch blew open some big questions in my own life. Perhaps not as weighty as the ones Dostoyevsky’s 19th century characters posed, but big enough for me.

The lunch came in an oval white dish in a New York City cafe. It was simple, fresh, and affordable — an American rendition of bibimbap, the Korean name for a mixed rice dish. Just lunch, really. In and of itself, much like the character Grushenka’s onion. But as I let the egg’s soft yellow drench the delicately chopped vegetables, I couldn’t silence the questions: What would it be like to walk through those doors every morning? To work in the tall tower rising up around me, full of the cubicles of some of the world’s most successful writers and editors? 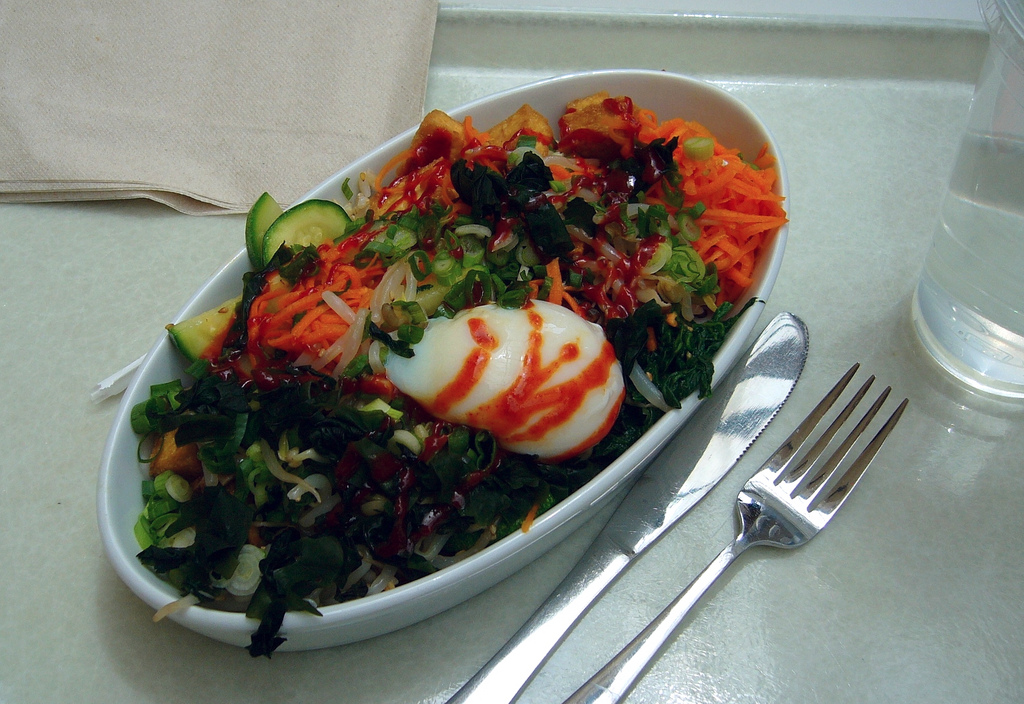 Usually when I’m stabbing cubes of fried tofu with my fork I’m not also having one of those moments of profound smallness. But this time I was. All around me success seemed to shine its toothy, too-perfect smile. All I could seem to muster was one halfway to hopeful.

That lunch stood in for something else, a life neither close nor far away. Food prepared by someone else. Outside all the amenities of a city fiercely alive. Wilderness packaged up in a park not much bigger than a postcard.

We ate well, and copiously. Cupcakes, sandwiches, pastries and fruit. Two days passed in the whirlwind of avenues and boulevards, stairs pointing to greatness, alleys threatening dead ends. I came out alive, but with more questions than ever, pushing against me like subway doors.

One lunch. A world just brushed up against. A window into an afternoon into a day, a week, a year, a life I can’t yet see clearly. A sigh of satisfaction with the present, with a Sidecar of uncertainty.

New York put flowers in my food and a Sonatra song in my heart. Back in Syracuse, the questions it left are proving a little harder to digest.

In the meantime, here’s a recipe for bibimbap.

*If you do not have a flameproof casserole dish, preheat the oven to 500 when you begin to saute the vegetables. Place it in the oven for 5 minutes just before serving.

modified from a recipe in the Moosewood Restaurant New Classics

2 thoughts on “one lunch”