My first project for this blog coincided nicely with Superbowl Sunday, also known as Evening Of Excessive Eating. I figured that since I’m starting triathlon training this week I deserved one last tango in the arms of Gluttony. Or at least in the collective embrace of butter and’ eggs.

So what to bring to the Great American Football Party? A late morning and a lazy afternoon yielded little inspiration for forays into the unknown world of new recipes or complicated appetizers. And so I turned to The Book: a sturdy collection of our family favourites, lovingly copied out in my mother’s own handwriting. I flipped to her recipe for Sour Cream Coffee Cake.

This cake has a history. Its simple cinnamon flavour and almost cheesecake-like density have made it the ultimate comfort food over recent years. It was there the day I moved into my new house full of roommates in 3rd year. It was there whenever I returned home, offering its crumbs of nutty, rich, just-sweet-enough-for-a-cup-of-coffee goodness. Apparently, someone at Canada Post likes it too, because one was once “lost” in the mail en route to a Ward family member. 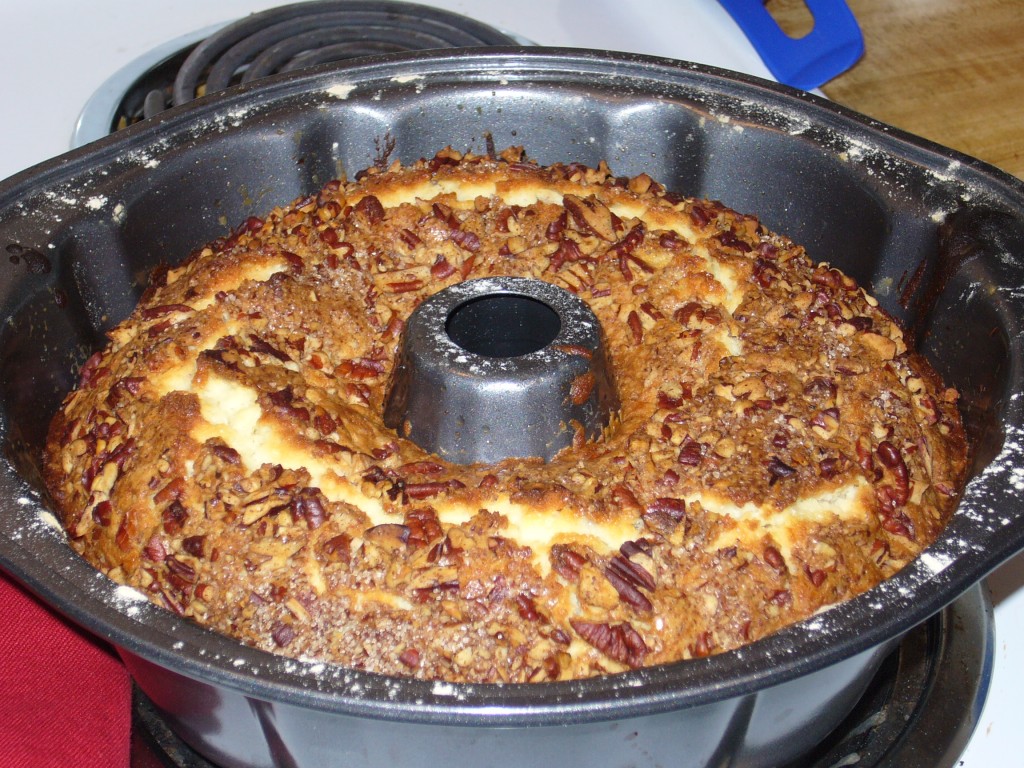 I made it for the gang, and it was a hit.

This cake reveals a slight swirl of cinnamon and pecans, achieved by layering them between slabs of thick dough in my favourite pan: Bundt bundt bundt. (I just love the way that sounds.) It was invented by an American engineer from Minneapolis who wanted a lighter version of the German ceramic Bund pan. While this cake was the perfect companion to a potluck, it did make me a little homesick. I guess that means it turned out well.